Claro is the largest mobile phone network in the Americas. It is part of the Mexican telecom group América Móvil which is one of the four largest mobile phone network operators in the world, with more than 200 million customers. It serves clients in Argentina, Brazil, Chile, the Dominican Republic, Ecuador, El Salvador, Guatemala, Honduras, Jamaica, Nicaragua, Panama, Paraguay, Peru, Puerto Rico and Uruguay. Claro may mean bright, clear or of course, in both Portuguese and Spanish.

Claro was launched in Argentina, Paraguay and Uruguay on March 25, 2008 as a rebranding of CTI Móvil. As of March 31, 2007 it had more than 12.795 million subscribers under the former brand, with services on CDMA/1XRTT and GSM/GPRS/EDGE wireless technologies. As of March 2008, it has more subscribers than the other companies.

It is providing 3G UMTS/HSDPA network to the largest cities in Argentina, Uruguay and Paraguay. They claim to have the best 3G coverage in the region.[1] 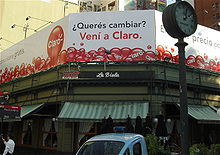 Claro advertisement on a Billboard in Recoleta, Buenos Aires, Argentina.

Later Claro expanded its services and now also operates in the states of Bahia, Sergipe, Santa Catarina, Paraná and Minas Gerais. Claro Brazil has GSM/GPRS/EDGE services at 900/1800 MHz, and since November 13, 2007 UMTS/HSDPA 3G service in the 850 MHz band, as well as a small 1900 MHz operation in the Pelotas region in Rio Grande do Sul. Since August 2008, Claro has also expanded its UMTS/HSDPA network to Minas Gerais, Bahia, Sergipe, Espírito Santo, Amazonas and Pará using the 2100 MHz band. Along with competitor Vivo, it was one of first two operators to make available the iPhone 3G in Brazil, with TIM entering later.

The brand was launched in Chile on August 6, 2006, after the acquisition of Smartcom PCS. Claro Chile have services GSM/GPRS/EDGE in 850/1900 MHz, and since December 2007 has 3G UMTS/HSDPA service in the 850 MHz band.

The brand was launched in the Dominican Republic on January 31, 2007, after the acquisition of Verizon Dominicana on April 3, 2006.

Also in Ecuador America Movil is present with Conecel, commercially known as Porta, until February 2011. The name Porta will be switched to Claro, as a commercial strategy of America Movil. It is the country's leading operator with almost 9 million subscribers, and launching WCDMA services.

The brand was launched in El Salvador, Honduras and Nicaragua on September 2006 as a rebranding of the former PCS Digital, Alo, Personal and Enitel brands.

Claro was launched in Guatemala on September 7th 2006 as a rebranding of the Telgua owned PCS Digital and Alo de PCS brands. As of March 31, 2007 Claro in Guatemala had more than 5.2 million subscribers under this brand, with services on CDMA/1XRTT, GSM/GPRS/EDGE and UMTS/HSDPA (some cities with HSPA) wireless technologies.(The international brand is Claro, which means Clear and without problems.)

Claro was launched as rebranding the heritage MiPhone. Oceanic Digital Jamaica Limited (ODJ) is a wholly owned subsidiary of América Móvil, and as of October 2008 provides service under the Claro name. They have built a GSM/UMTS/HSDPA network alongside the current CDMA network. The plans include serving fixed wireless and broadband services on the CDMA network. Claro has become one of the main mobile networks in Jamaica competing with Digicel and LIME.

The Panama government has authorized a license to use the spectrum in Panama by America Móvil, who now provides services under the Claro brand. The government's effort aims at the expansion of competition and mobile access to the Panamanian population.

Claro was launched as a rebranding of TIM.

The Claro brand was launched in Puerto Rico on May 18, 2007 as a rebranding the Verizon Wireless trademark. Claro is the wireless arm of Puerto Rico Telephone which serves wireline telephone and data services in the island. The brand was introduced to the wireless segment after the March 30, 2007 acquisition of the telecom by América Móvil.

Claro Puerto Rico is currently the second largest mobile network serving the island (after AT&T Mobility), with more than 1,000,000 customers and the most complete coverage serving the island's 78 municipalities/cities. The first cellular network in the island was introduced by Puerto Rico Telephone during the 1980s. The history goes back to Celulares Telefónica, which operated until 2001 under that brand, when the Verizon Wireless brand was introduced.

The company launched a 3G GSM/UMTS network parallel to the CDMA/EvDO network it operates since 2002. Claro has mobile voice and data services in Puerto Rico's 78 cities and towns and its coverage is constantly expanding, the company says.

On May 1, 2008, Claro introduced the VideoCall service through its 3G GSM network. The customers are able to make calls using the videocamera of their cellphone, to any other VideoCall user. The service places a new standard of calling in the island -being first introduced by Claro- enabling the users to make dual-sided video calls.