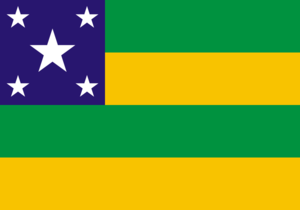 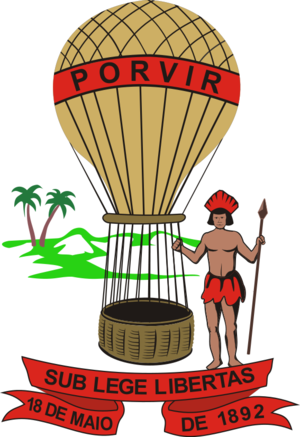 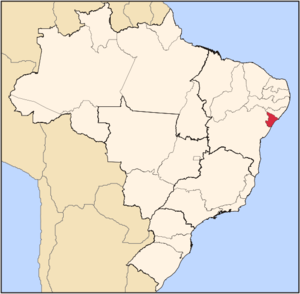 Sergipe (pronounced|sɛxˈʒipi) [In the variant spoken in Sergipe.] (originally Sergipe D'El-Rey), is the smallest state of , located on the northeastern Atlantic coast of the country. It borders on two other states, in the and and in the north, and in the east on the . is the capital and the largest city of the state. The warm s of and tropical scenery along the coast have been attracting growing numbers of s from Brazil and abroad. In the capital, , there are many options for tours, such as catamaran rides on the Rio Sergipe, that include a visit to the Ilha de Santa Luzia, or on the Rio Real, all the way to Mangue Seco in the state of . To the , at the Praia de Pirambu, you can visit the base of the Tamar Project (where sea turtles lay their eggs). The history and the customs of the sergipano people are well represented in the Memorial of Sergipe.

As with most of the states in northeastern Brazil, inland Sergipe is almost entirely (""), and its coastline is characterised by s, s and sandy es. A small strip of runs down the coast. The forms its northern boundary, and the drainage of the northern part of the state is northward and eastward to that river. The southern half of the state slopes eastward and is drained directly into the Atlantic through a number of small rivers, the largest of which are the Irapiranga (whose source in the state of Bahia is called at its mouth), the Real and the Cotinguiba. These streams are navigable for short distances, but are obstructed by sand bars at their mouths, that of Cotinguiba being especially dangerous. The surface of the state resembles in part that of Bahia, with a zone of forested lands near the coast and back of this a higher zone of rough open country, called "." There is a sandy belt along the coast, and the western frontier is slightly mountainous. The intermediate lands are highly fertile, especially in the forested region where the rainfall is abundant. Further inland the year is divided into wet and dry seasons with occasional prolonged droughts. These districts are , and the lower fertile lands are cultivated. There are no good ports on the coast because of the bars at the mouths of the rivers. The capital of the state is (pop. 479 767 in 2003), on the lower course or of the Cotinguiba River, near the coast. The sandbar at the entrance to this river is exceptionally dangerous, and the port is frequented only by vessels of light draught. The town stands on a sandy plain, and there are sand within the city limits. The public buildings are a large plain church with unfinished twin towers, the government palace, the legislative halls, a public school and public . The other principal towns are (pop. 62,218 in 2005) on the Rio Real in the southern part of the state, with manufacture of cotton textiles, cigars and cigarettes and and an active trade; Laranjeiras (pop. 26,452 in 2005), in a highly productive sugar district north of the capital; Capela (pop. 27,403 in 2005); (pop. 39,706 in 2005); Lagarto (pop. 90,345 in 2005); , formerly Sergipe d'el-Rey (pop. 75,353 in 2005), the old colonial capital near the mouth of the Irapiranga; and (pop. 15,937 in 2005).

was the site of the first settlement by the Portuguese, in 1591 at Sergipe D'El-Rey, what is today Sergipe (the name Sergipe is actually a Tupi word, meaning river of ""), becoming the state's capital.

As with other states in the northeast, Sergipe was invaded numerous times by the Dutch, and frequently raided by French s. During the 1600s, the state was known throughout the Americas for its king-wood, a prized commodity that was the primary attraction in the buccaneer raids, and probably a factor in Dutch military expeditions. By the 1700s, the Portuguese military had driven off the pirates permanently.

In 1855, under the administation of provincial president Inácio Joaquim Barbosa, the capital was moved to .

In the 1930s Sergipe became notorious for its s, including Virgolino Ferreira da Silva, - better known as , the "King of Bandits", who terrorised the state for almost a decade until his by the Brazilian police in 1938. His head was later displayed on a pole in a village square.

Sergipe's economy is focused around the production of , and the enormous cane fields, taking advantage of the wet and fertile soil, produce over 1.4 million tons of annually. Unlike in many Brazilian states, is not a major industry, as the land area of the state prevents large scale grazing. Along with sugarcane, (617,400 tons annually) and oranges (14.4 million oranges annually) are grown. A small-scale and also exists.

The Brazilian federal government is also encouraging the development of a fledgling and industry.

Aracaju International Airport. It was inaugurated on October 30th 1952 with runway only 1200 metres long; the airport did not have an access road until 1958, so after that operating efficiency increased. In 1961 the runway was extende to 1500 metres and a passenger terminal was built in 1962. At the time, Sergipe capital had the most modern airport of the northeastern region of . In February 1975 the airport was handed over to the authority of .

is the fourth oldest town in the country, and Sergipe's state capital until 1855. It is located some 25 km (15.53 mi.) from the current capital Aracaju.

As a planned urban settlement, the town contains churches and religious ensembles dating back to the colonial period. Most of these monuments are concentrated around the São Francisco Square.

In 1939, São Cristóvão was designated as a National Treasure by the Instituto do Patrimônio histórico e Artístico Nacional - IPHAN (The Brazilian National Historical and Artistical Heritage Institute).

Landscape, rocky formations, crystal clear waters, ecological trails, Caatinga Theme Park, exuberant vegetation and diversified fauna and flora: this is Xingó, located in Canindé do São Francisco – on the banks of the lengthy and well-known São Francisco river. To navigate between the rocks of this gigantic cliff embedded in the middle of Sergipe’s Alto Sertão is an unforgettable experience. There are imposing valleys forming a 50 m-high canyon, surrounding a lake that, in certain points, reaches a depth of 190 m. Nests of herons and fluvial islands complete the spectacle. The rocks guard traces of the area’s first inhabitants who lived there more than 8,000 years ago. There are also traces of Lampião’s stay there with his gang of outlaws in less remote times. Angico trail, in Poço Redondo, leads to the cavern of the same name, where Lampião, Maria Bonita and nine other outlaws lost their lives. Located in the town of Canindé do São Francisco, 213 km (132 miles) from Aracaju, Xingó Canyon is one of the most famous rocky formations in the area, embellishing the landscape of the dry Northeastern backwoods. It is hot all year round, but the strong wind blowing from December to January keeps temperatures at a very comfortable level. Between May and August, it rains frequently.

The stars on the flag of Sergipe represent the number of estuaries in the state, and the green and yellow stripes represent Sergipe's union with the rest of Brazil. It was designed by José Rodrigues Bastos Coelho, a businessman who felt that Brazilian s should carry flags to identify their state of origin. It was officially adopted on , .

In 1937, dictator abolished all state flags and symbols, but they were allowed again in 1946. In 1951, when the Sergipe legislature began to consider restoring the state flag, it decided to change the number of stars, so that there would be one for every in the state. In 1952, this new design was scrapped and replaced by the original 5 star design.