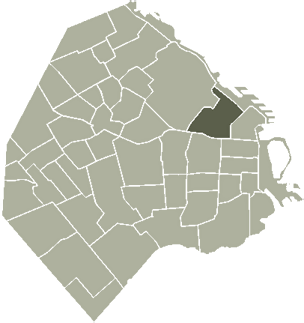 Recoleta is a neighbourhood ("barrio") in , . This typical "French architecture-style" district is known for its squares, parks, cafés, galleries and the "Cementerio de la Recoleta" (Recoleta Cemetery), one of Argentina's most important cemeteries. The neighborhood was named after the "Convento de los Recoletos Descalzos" (The Monastery of Barefoot Franciscan Recoleto Monks).

Recoleta is part of the area known as Barrio Norte, together with the neighbouring barrios of Retiro, Palermo and the northern part of . Like its neighbours, Recoleta is an affluent residential district, initially populated by citizens escaping the 1871 epidemic. Recoleta is one of the most expensive neighbourhoods to reside in Buenos Aires, both in terms of real estate and of the cost of living. Even dying here is costly, as a in the Recoleta cemetery is of great expense.Recoleta centers on a square in front of the Cemetery and the neighbouring "Basilica Nuestra Señora Del Pilar" church. This was a relatively high point on the banks of the river and served as a hiding place for s in the 17th century. In the early 18th century, French s known as the "Padres Recoletos" built a chapel and convent in the area. The s also arrived and built the Basilica, completed in 1732. This colonial-style church is fitted with a magnificent , brought from , decorated with Jujuy silver and pre-Hispanic ornamentation.

The Recoleta Cemetery's status as a tourist attraction is rivaled by few; some compare it to in . It was designed by Prospero Catelin of France, following a proposal by , and opened in 1822 as a public cemetery for ordinary citizens. Now it hosts many former Presidents and, most famously, , in mausolea of marble, bronze and granite.

The neighbourhood has been referred to as the "Paris of the Americas", many "Fin de Siècle" French-style palaces and villas were built in the area, especially on with its sophisticated restaurants, up-scale shopping and mansions built by the afluent families of Buenos Aires, (today some used as embassies), and one of America's most luxurious hotels, the grand five-star Alvear Palace Hotel, Four Seasons Hotel. Confitería La Biela is one of the city's most famous cafés and is patronized by authors, politicians, and other celebrities. On the square facing the cemetery is an enormous rubber tree; its huge tentacle-like lower branches cast a shade over La Biela's popular terrace. Known as the "Gran Gomero", it was planted in 1878 and is 50 metres wide.

Nightlife is also very active and trendy, with the pedestrian passage RM Ortíz (Recoleta Village) known for its outdoor dining, pubs and cinemas.

Next to the Basilica, on the site of the Franciscan convent, is the Recoleta Cultural Centre, a major gallery for contemporary visual art, set in a dark pink chapel. Nearby is the "Buenos Aires Design Centre", featuring high design, architecture and interior design shops. The "Palais de Glace", originally an ice rink and ballroom, now serves as an exhibition centre. It was here in 1915 that was wounded after being shot by 's father, Ernesto Guevara Lynch, as a result of a bar room brawl. Recoleta is also home to the Bar Restaurant Museo Renault, La Biela Bar, The Jockey Club, the National Library, the "Museo Nacional de Bellas Artes" (Museum of Fine Arts) and the Law School of the University of Buenos Aires.