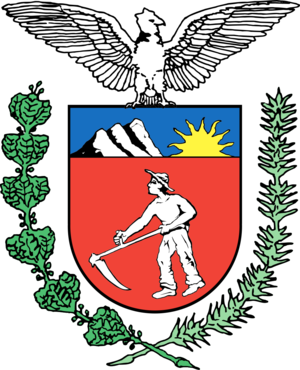 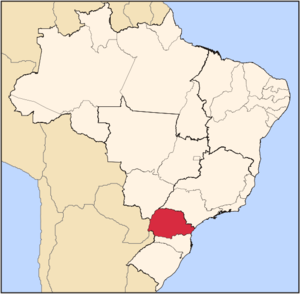 Paraná (pronounced|paɾaˈna [In . The pronunciation is IPA| [pɐɾɐˈna] .] ) is one of the states of , located in the South of the country, bordering and . Cut by the Tropic of Capricorn, Paraná has what is left of the araucarias forest, one of the most important subtropical forests of the . At the border with is the National of Iguaçú, considered by as Patrimony of the Humanity and the spectacle of the Cataratas do Iguaçú attracts about 700 thousand s per year. At only 40 km (24 miles) from there, at the border with , the largest of the was built, the Hidroelétrica de Itaipú. The State of Vila Velha near the city of , is another attraction, with great rocky formations sculptured by the erosion of and . , the capital, is famous for its excellent quality of , and the Ilha do Mel, next to the historical , is another destination for eco-tourists.

Paraná is bounded on the north by , on the east by the , on the south by and the of , and on the west by and the republic of , with the as its western boundary line.

It state includes two geographic regions, a narrow coastal zone that that is home to the , and a high plateau (2500 to 3000 ft.) whose precipitous, deeply eroded eastern escarpments are known as the . ecoregion.The larger rivers of the state comprise the Paranapanema and its tributaries the Cinza and Tibagi, the Ivaí, Piquiri, Jejuí-Guaçu, and the Iguaçu with its principal tributary the Rio Negro. The Paranapanema and a small tributary, the Itararé, form the boundary line with São Paulo west of the Serra do Mar, and the Iguaçu and Negro, the boundary line with Santa Catarina and Argentina - both streams having their sources in the Serra do Mar and flowing westward to the Paraná. The other streams have shorter courses, and all are obstructed by falls and rapids. Twenty miles above the mouth of the Iguaçu are the , convert|215|ft|m|abbr=on. high, broken into twenty or more falls separated by rocks and islands, and surrounded by a wild, unsettled and wooded country. The surface of the plateau is undulating and the greater part is adapted to agricultural and pastoral purposes.

Paraná was first settled by gold prospectors from and formed part of the captaincy and province of São Paulo.

The first missions of the s on the Paraná were situated just above the Guaíra Falls in this state and had reached a highly prosperous condition when the Indian slave hunters of (called s) compelled them to leave their settlements and emigrate in mass to what is now the Argentine territory of Misiones. Their principal mission was known as Ciudad Real.

The territory was set apart from São Paulo in 1853. did so as a punishment for São Paulo support of the insurrection of 1842.

Waves of an started arriving after 1850, mainly Germans, Italians, Poles and Ukrainians. The development of the state is closely linked to the arrival of the s.

By the early 20th century, the state had two railway systems: the Paranagua to Curitiba (69 miles) with an extension to Ponta Grossa (118 miles) and branches to Rio Negro (55 miles), Porto Amazonas (6 miles) and Antonina (10 miles); and the São Paulo and Rio Grande, which crosses the state from northeast to south-west from União da Vitória, on the Iguaçu, to a junction with the Sorocabana line of São Paulo at Itararé. The junction of the two systems was at Ponta Grossa, north-west of Curitiba.

People of mixed-race ancestry predominate in a few towns in the north. There is a sizeable Lebanese and Syrian community around . In the north, Japanese people are very numerous. [ [http://www3.pr.gov.br/e-parana/pg_etnias.php :Governo do Estado do Paraná: ] ]

*
is Curitiba's main airport. It is located in the nearby city of São José dos Pinhais and all commercial flights operate from this airport. It is integrated into Curitiba's transportation system, with rapid buses and executive buses connecting the airport to the city.Small aircraft may also use the Bacacheri airport, which today hosts a flight school and a national airbase.

*
. ’s main airlines serve the city daily, connecting it with the rest of the country and foreign cities. Regional routes also serve local traffic. The airport is equipped for both visual and instrument operations, and has received charter flights from various continents. Its runway can serve s such as the 747/100 and 747/200.At there are currently four daily flights by Varig, two by Vasp, two by Tam and one by Ocean Air.The combination of transport by highway, air, river and railway makes Foz do Iguaçu an excellent, perhaps unique, location in the of the . Its geographic location makes it a natural port for . In the future it also will be an obligatory port of entrance and exit of the bi-ocean central corridor.

Paraná has one of the highest standards of living in Brazil with relatively low crime levels, a special attention given to and and a of ~0.820, the 5th highest in Brazil.

In October 2003 the communist government of Mr. Roberto Requião, the state governor, tried to impose to Paraná a ban in both the cultivation and transportation of genetically modified crops. This was stricter than the Brazilian standard, and eventually found unconstitutional and overruled by federal courts. The claim of Paranian farmers blocked such insane initiative and today at least 80 % of the soybeans produced on the state are OGM, and OGM corn is coming as well.

The official propaganda of Mr. Requião has tried to sell Paraná as Brazil's largest exporter of organically-grown crops.

Nevertheless, and apart of chemiophobia, the point is that agriculture in Paraná still keeping by itself his heritage of high technological grounds, being concerned today in saving precious resources, like fuel, water, land and fertilizers, as well in cleaning the atmosphere by the sequestration of carbon result of the largest no-tillage move in history. This demand well qualified and paid jobs, and the result has being an all around development of the countryside related to agriculture, with an impressive decline in poverty on the last decade.

Must be stated that this great social improvement, like all children in schools, improved healthcare, homing and standard of living of the people as all, elimination of hungry, shining cities, paved roads, all has being acquired none by gift of whatever government but by the Paranian way of doing: Working hard, being righteous, loving and protecting family and land and never expecting nothing from nowhere but his own work

Curitiba provides visitors and residents with various sport activities. There are several soccer clubs based in Curitiba, such as:
*;
*;
*.