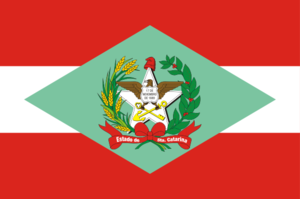 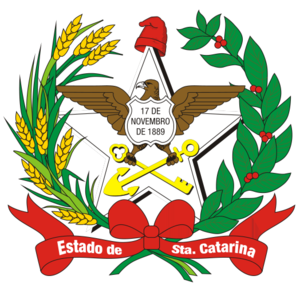 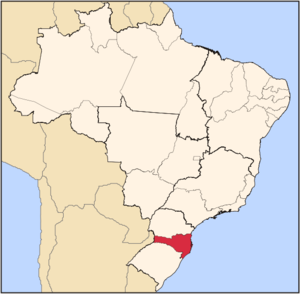 Audio|Br-SantaCatarina.ogg|Santa Catarina (pronounced|ˈsɐ̃ta kataˈɾina [In . The pronunciation is IPA2|ˈsɐ̃tɐ kɐtɐˈɾinɐ.] ) is a state in southern with one of the highest standards of living in the country. Its capital is , which mostly lies on the . Neighboring states are to the south and Paraná to the north. It is bounded on the east by the , and to the west it borders the province of , . Most of its inhabitants are descendants of Portuguese, German and Italian immigrants.

The es along the coast of 561 kilometers (348 miles) are a great attraction for s visiting the smallest State of the South Region. , the capital, is on an island and is one of the Brazilian cities that receives the most foreign s. To the south, Garopaba is the preferred destination of surfers looking for good waves. In the mountain region, São Joaquin is the attraction during winter because of its low temperatures. , in the interior of Santa Catarina, is the stage for one of the biggest events of the country: the , a traditional beer party originated from , that happens in October. The heritage of the Italian, German and Portuguese s can be seen in the and the s of the state.

The , a southern extension of the , runs north and south through the state parallel to the Atlantic coast, dividing the state between a narrow coastal plain and a larger plateau region to the west.The Atlantic coast of Santa Catarina has many beaches, islands, bays, inlets, and lagoons. The humid tropical cover the narrow coastal zone, which is crossed by numerous short streams from the wooded slopes of the serras.

European settlement began with the Spanish settlement of in 1542. The Portuguese took control in 1675. The captaincy of Santa Catarina was established in 1738. Large numbers of European immigrants, especially from , began arriving in the early 19th century. Immigrants from , , , , and other parts of later arrived, with one result being an abundance of small, family-held farms in the state's interior. In late March 2004, the state was hit by the first ever recorded in the . Because there is no naming system for such an event in Brazil, Brazilian meteorologists called it Catarina, after the state.

Santa Catarina is one of the Brazilian states that exhibits the most signs of 19th century European immigration. The vast majority of the population are descendants of European settlers.

The Portuguese started arriving in the 1750s, mainly from the islands, and colonized the coast. In the late 18th century, half of Santa Catarina's population was Portuguese-born. These Portuguese established many important towns of the state, such as , the capital.

Germans started arriving in 1828. They were peasants that were attracted to Brazil by the opportunity to get their own land, since was overpopulated and many people had no land to work. German immigration was very low, until the 1850s, when waves of Germans started arriving in Southern Brazil. To stimulate the development of the German colonization in Southern Brazil, the Brazilian government created many "German colonies." These colonies were ethnically Germanic areas, where people from many parts of Germany settled. Initially, these colonies were in rural areas, where the immigrants were able to cultivate their own farms. Many of these German colonies developed greatly and became big towns, such as and , the largest city in Santa Catarina.

Germans had been isolated in rural communities for decades. They did not have much contact with the other peoples of Brazil, and for generations they were able to speak German and keep their German traditions in Brazil. This situation changed in 1942, during , when Brazil declared war against Germany and the German immigrants were required to learn Portuguese and to follow a "Brazilian way of life."Nowadays, the German influence in the State of Santa Catarina is still very strong and visible. Many towns, especially the small ones, still retain many aspects of the German culture, such as , a small town where 90% of the population are of heritage and most of the inhabitants speak German fluently or the of and many other towns in the region. The architecture also shows German influence, which is also evident in people's customs and food.

Italian settlers started arriving in Santa Catarina in 1875 and immigrated in large numbers until the 1910s. They were peasants from and established themselves in ethnically Italian colonies close to the coast. In the beginning, the Italian settlement had failed, because many Italians died of tropical diseases or left the colonies to find better conditions. However, in Vale do Tubarão region (southern Santa Catarina), Italian s found cooler weather and better lands, and the settlements prospered. Many Italians worked in the coal and, unlike the German immigrants, they did not dedicate themselves very much to . As they were not isolated in rural colonies, Italian immigrants were quickly integrated into the Brazilians of Portuguese descent, that had been living there since the 18th century.

Santa Catarina has one of the highest standards of living in - comparable to the Iberian Peninsula countries, and is a major industrial and agricultural center.

In the northeast of the state, electric-mechanical, textile and furniture industries are strong; in the west, cattle and poultry breeding predominate, while in the south it is ceramics and shellfish.

The corridor between Joinville, Jaragua do Sul and Blumenau is heavily industrialized - more than 50% of the state's industrial output is concentrated in this small, but highly developed area.

Santa Catarina has some of the most beautiful beaches in - Summer months (Dec-Mar) make the state one of the most sought-after travel destinations in Brazil and South America. Tens of thousands of Argentines and Paraguayans flock to the state's beaches from mid December to late January.

The major cities and their respective fields are:

Florianópolis is served by for both domestic and international flights. The traffic has grown significantly at the airport and therefore the city will shortly build a new airport able to serve 2.7 million passengers a year. The architectural design of the new airport was chosen by a public competition held by in partnership with the Brazilian Architects Institute (IAB). Among the over 150 original entries, the proposal of São Paulo architect Mário Bizelli was chosen. The construction work will be tendered in 2005 and should be finished in two years.

Tourism and leisure all the year round

Santa Catarina is not just a summer destination. The state which was initially known for its beautiful coastline with more than 500 beaches found that its geographic and cultural diversity was also a big tourist attraction and as a result, tourists can today enjoy contrasting types of scenery and climate which are very close to each other – only two hours by car separate paradisiacal beaches from some 2000 meters-high mountains.

Some of these sights can only be seen in the off-season, like the snow spectacle on the Catarinense Mountain Range - the only place in Brazil where it snows every year. This region is the birthplace of rural tourism, has farm hotels with trout fishing in the ice-cold rivers, horse riding, trekking and outdoor sports activities.

Between July and November, the Right whales visit the state's coast – and the number of tourists wishing to see this spectacle has increased year after year.

The big festivities are in October. The main in is Brazil's largest and the world's second largest (after Germany's ).

is the host city of the July "Joinville Dance Festival", the annual "Festival of Flowers" in November which showcases orchids produced in the region, and several business events in its Convention Center.

the city/island State Capital attracts a large numbers of tourists during the summer months lured by its 42 beaches.

Santa Catarina has one of the most beautiful coastlines in Brazil, with one very busy beach resort: , the Costão of Santinho resort.

There are also many smaller resort towns, including , Piçarras, and , home to the famous amusement park "Beto Carrero World".

There are two professional football teams in the city. Both of them have 13 Santa Catarina State Championship titles, which is a state record. The derby between them is known as "O Clássico da Capital" ("The Capital's Classic").

Figueirense FC - black and white. Its nickname is "Figueira" ("Figtree") and it is also known as "O Furacão do Estreito" ("The Estreito's Hurricane"). Its stadium is the Orlando Scarpelli, located in the Estreito neighborhood, in the continental part of the city. Figueirense is currently playing in the Brazilian first division.

Avaí FC - blue and white. It is also known as "O Leão da Ilha" ("The Lion of the Island"). Its stadium is the "Aderbal Ramos da Silva", popularly known as "Ressacada", located in the neighborhood, in the south part of the island. Avaí is currently playing in the Brazilian national second division.

Florianópolis is the hometown of tennis star .

The island is generally considered to be blessed with the best and most consistent waves in , and in early November of each year hosts what is currently 's only ASP (Association of Surfing Professionals) World Championship Tour professional surfing competition. Brazil has played host to many an ASP tour event over the past 30 years. Former contest sites include , Barra de Tijuca and Saquarema, but the past four years have seen the tour set up shop in Florianopolis. Falling towards the end of the tour, the past few years have seen several ASP world champions crowned in Brazil. In 2004 it was Andy Irons, and in 2005 it was Kelly Slater (who had his 2006 ASP World Title already stitched up by Brazil).

The minority languages of the state of Santa Catarina can be divided into two distinct groups:

The Autoctone Languages or Indigenous Languages: ; Guaraní; others...

In some cities and villages, German and Italian are still the first spoken language.

* (all cities and municipalities)