Cooch Behar district
This article is about the district. For its eponymous headquarters, see Cooch Behar.

Cooch Behar district (Bengali: কোচবিহার জেলা, Rajbongshi/Kamatapuri : কোচবিহার) is a district of the state of West Bengal, India, as well as the district's namesake town. During the British Raj, the town of Cooch Behar was the seat of a princely state of Koch Bihar, ruled by the Koch dynasty.

As of 2011 it is the third least populous district of West Bengal (out of 19), after Dakshin Dinajpur and Darjeeling.[2]

The name "Cooch-Behar" is derived from the name of the Koch Rajbongshi tribe that is indigenous to this area. The word "Behar" is the Sanskrit word "Bihar" (to travel) which means the land through which the "Koch Rajbongshi" Kings used to travel or roam about ("Bihar").

The greatest Koch Rajbongshi King that has ever ruled in the Kingdom of Kamatapur is Maharaj Naranarayan, as well as his younger brother Prince Chilaray and other descendents. Historic Kamatapur comprises the total North Bengal maximum parts of Assam, some parts of present Bangladesh, Kishanganj district of Bihar and a few parts of Bhutan. The Koch-Rajbongshi community is demanding a separate state of their own comprising the parts of their old Kingdom to save their centuries-old culture from extinction.

The Koch dynasty originated from Mahishya community and has ruled the area around the town of Cooch Behar since the 16th century. The state remained unaffected by the great changes that overtook its surrounding provinces in the decade following the Battle of Plassey in 1757. However, it was invaded by Bhutan in the latter half of the 18th century, which prompted a British Ambassador to Bhutan, George Bogle to enter into a formal treaty alliance with the British in 1775. In 1947, the state acceded to the dominion of India and merged with the Union of India shortly afterwards.

Over time, Cooch Behar has been transformed from a kingdom to a state and from a state to the present status of a district. Before 28 August 1949, Cooch Behar was a Princely state ruled by the king of Cooch Behar, who had been a feudatory ruler under the British Government. By an agreement dated 28 August 1949 the king of Cooch Behar ceded full and extensive authority, jurisdiction and power of the state to the Dominion Government of India. The transfer of administration of the state to the Government of India came into force on 12 September 1949. Eventually, Cooch Behar was transferred and merged with the province of West Bengal on 19 January 1950 and from that date Cooch Behar emerged as a new District in the administrative map of West Bengal. 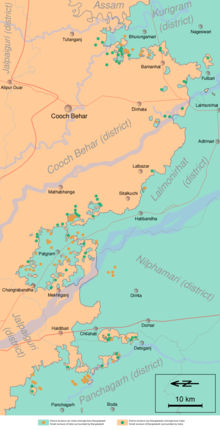 Exclaves of India and Bangladesh in and around Cooch Behar district

Being the district near the Eastern Himalayan foothills, after rains in the catchment area of each of the rivers generally attain strong current and flood the adjacent area. The turbulent water carries sand, silt, pebbles which causes many problems in productivity as well as hydrology. The soil is formed by alluvial deposits and is acidic in nature. It is friable loam to sandy loam ranging in depth from 0.15 to 1 meter. The soil has a low level of nitrogen while potassium and phosphorus levels are medium. Deficiency of zinc, calcium, magnesium and sulphur is quite high.[citation needed]

Cooch Behar is a flat country with a slight southeastern slope along which the main rivers of the district flow. Most of the highland areas are in the Sitalkuchi region and most of the low-lying lands lie in Dinhata region.

The rivers in the district of Cooch Behar generally flow from northwest to southeast. Six rivers that cut through the district are the Teesta, Jaldhaka, Torsha, Kaljani, Raidak, Gadadhar and Ghargharia.

The district of Cooch Behar has a moderate type of climate characterised by heavy rainfall during the monsoon and slight rainfall in the month of October to mid-November. The district does not have high temperatures at any time of the year. The summer season is from April to May with April being the hottest month with mean daily maximum of 32.5 °C and mean daily minimum of 20.2 °C. The winter season lasts from late November to February, with January being the coldest month with temperature ranging from 10.4 °C to 24.1 °C. The recorded temperature minimum is 3.9 °C and respective recorded maximum is 39.9 °C. The atmosphere is highly humid throughout the year, except the period from February to May, when the relative humidity is as low as 50 to 70%. The rainy season lasts from June to September. The district's average annual rainfall is 3 201 mm.

The agricultural area of Cooch Behar is 2530.63 square kilometers. The dominant agricultural products of Cooch Behar district are jute and tobacco. Paddy rice is also grown before and after the rainy season. Common plantation crops are arecanut, coconut and black pepper. Vegetable, mustard plant, and potato cultivation are increasing. In order to support agriculture, special programs have been taken for the production of sunflowers, maize and groundnuts. Revolutionary methods are being used in Boro paddy and potato cultivation. But due to nonadoption of modern technology, a large number of farmers still depend on traditional technology. Only 33% of the potentially cultivable land is developed for irrigation. In Kharif, the area of production of vegetables and other crops is much less. The ovine breed in the region originates from Tibet and was brought to the plains of West Bengal by traders. The trade between Tibetan traders and traders from the plains of Bengal took place from the region. The sheep along with other items of trade were transported to a place known as Bhot Patti (situated in Maynaguri Block of Jalpaiguri District). The major trading occurred at a place known as Rangpur, situated now in Bangladesh. The goods were exchanged and the sheep were also taken to plains of Bengal by the returning traders, the animals were given to the farmers of Sunderban region for rearing and bringing them back to their health. The sheep were used for their meat by the Europeans during the colonial era. They preferred mutton over Chevon so sheep meat was in great demand. A single consignment of the sheep were transported to Australia in the late 18th century when the Australian colony was being settled. The consignment was shipped from the port of Fulta near Kolkata. However, the sheep were not preferred by the settlers as their size was small and wool quality too was inferior. The breed Booroola Merino of Australia are the descendents of the same sheep.

Other than municipality area, each subdivision contains community development blocs which in turn are divided into rural areas and census towns.[6] In total there are 10 urban units: 6 municipalities and 4 census towns. Cooch Behar, Kharimala Khagrabari and Guriahati are part of a urban agglomeration. Dinhata and Bhangri Pratham Khanda also form an urban agglomeration together.

The district is divided into 9 assembly constituencies:[7]

Impact of delimitation of constituencies 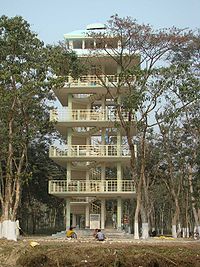 Apart from these other tourist spots are:

In absence of large forest area in the district, except at Patlakhawa, not many species of animal are found though there are many wildlife sanctuaries, national parks and animal reserves in the neighboring Jalpaiguri district and Alipurduar subdivision of Jalpaiguri which are not very far from the district.