Hong Kong is one of the most densely populated areas in the world with an overall density of some 6,300 people per square kilometre. The term "densely populated, green city" is used to describe the majority of the people living in apartments in high-rise buildings, and most land reserved for open spaces, country parks, and woodland.

People from Hong Kong generally refer to themselves, in Cantonese, as Hèung Góng Yàhn (Chinese: 香港人; Cantonese Yale: Hèung Góng Yàhn; literally "Hong Kong people"); however the term is not restricted to those of Chinese descent. Due to Hong Kong's nearly 150-year colonial history that saw the stationing of English, Indians and Russians among other ethnic groups as civil servants or traders.[clarification needed] Thus a distinct and legitimate non-Cantonese culture with specifics to Hong Kong grew. Mixing of cultural groups did not occur much beyond governance and business due to two main reasons:

In English, the term "Hong Kongers" (or sometimes Hongkongers) and "Hongkongese" are becoming more popular to describe the people of and unique local culture of Hong Kong.[1][2] The term 'Hong Konger' or 'Hongkonger' is used to refer to the Hong Kong people, while 'Hong Kong' (or 'Hongkongese') is an adjective for people or things related to Hong Kong. 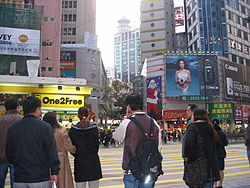 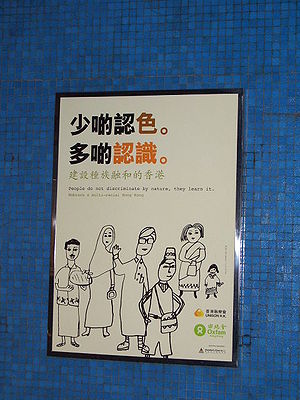 Chinese make up 95% of the population with the other groups floating at around 5%.[12] The national census does not break down people of European descent into separate categories, nor are Chinese ethnic subgroups separated in the statistics. However, the majority of Hong Kongers of Chinese descent trace their ancestry to various parts of Southern China: the Guangzhou area, followed by Sze Yap (a region of four counties neighboring Guangzhou), Chaoshan (a region of North Guangdong home to Teochew speakers), Fujian and Shanghai.[13] Some Hong Kongers also originate from Hakka-speaking villages in the New Territories.[14] Most Teochew-speaking migrants immigrated to Hong Kong from the late 1940s to the early 1970s, while migrants from Fujian province (previously Min Nan speakers, and increasingly more Min Zhong and Min Bei speakers) have constituted a large-growing number of migrants since 1978.[15] 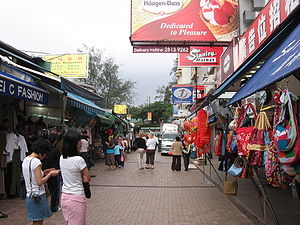 Stanley Market, one of the more diverse destinations

The current list is in alphabetical order after category. 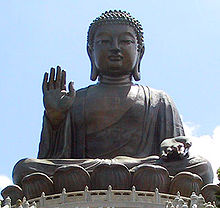 The majority of residents of Hong Kong would claim no religious affiliation, professing a form of agnosticism or atheism.[16] According to the U.S Department of State only 43 percent of the population practices some form of religion.[17] Some figures put it higher, according to a Gallup poll, 64% of Hong Kong do not believe in any religion,[18][19] and possibly 80% of Hong Kong claim no religion.[20] According to another gallup poll, Hong Kong is the seventh least religious country in the world, with only 22% of the population considering religion an important part of their daily lives.[21] In Hong Kong teaching evolution won out in curriculum dispute about whether to teach other explanations, and that creationism and intelligent design will form no part of the senior secondary biology curriculum[22] [23]

Hong Kong enjoys a high degree of religious freedom, a right enshrined and protected through its constitutional document, the Basic Law. A local religious scholar in contact with major denominations estimates there are approximately 1.5 million Buddhists and Taoists.[17][24][25][26][27][28] Buddhists and Taoists share a common background of Confucian theory, Chinese folk religion (worship of folk deities and figures of Chinese mythology) and ancestor worship.

A sizable Christian community of around 560,000 local adherents (320,000 Protestants, 240,000 Roman Catholics)[29] to 660,000 exists (if including over 100,000 Filipino Catholics),[30] forming about 8% to 9% of the total population; it is roughly equally divided between Catholics and Protestants. Apart from the major religions, there are also a significant number of followers of other religions, including an estimated 90,000 Muslims; 22,000 members of The Church of Jesus Christ of Latter-day Saints;[31] 4,000 Jews; 4,789 Jehovah's Witnesses[32] and a number of Hindus, Sikhs and Bahá'ís.[29] There is also a small group of Jains in Hong Kong and their temple is situated in an apartment[citation needed]. Apart from offering religious instructions, many major religious bodies have established schools and provided social welfare facilities.