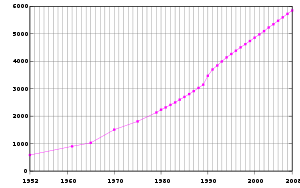 The population of Jordan since 1952.

While native Jordanians are mostly descended from people of villagers and Bedouin descent originating in the Arabian Peninsula,[3] more than half of the population originally descended from Palestine, which they immigrated from in the 1948 and 1967 wars. In addition, there's Jordanian minorities like the Circassians, Chechens, and Armenians. However, there are a number of other ethnicities present, including communities of Kurds, Assyrians, and Mandeans of which some are refugees from the 2003 Iraqi war. According to UNRWA, there are 1,951,603 Palestinian refugees in Jordan as of June 2008, 31.5% of Jordan's population.[4] There are also approximately one million Iraqis currently residing in the country. Also, hundreds of thousands of guest workers from Egypt, Syria, Indonesia, and South Asia work as domestic and construction employees. Also, there are a few thousand residents of Lebanese origin who came to Jordan when civil strife and war broke out in their native country. They primarily reside in Amman. The official language is Arabic, but English is used widely in commerce and government. About 70% of Jordan's population is urban; less than 6% of the rural population is nomadic or semi-nomadic. Most people live where the rainfall supports agriculture.

The territory of Jordan can be defined by the history of its creation after the end of World War I, the League of Nations and redrawing of the borders of the Eastern Mediterranean littoral. The ensuing decisions, most notably the Sykes–Picot Agreement, which created the British Mandate of Palestine. In September 1922, Transjordan was formally identified as a subdivision of the Mandate Palestine after the League of Nations approved the British Transjordan memorandum which stated that the Mandate territories east of the River Jordan would be excluded from all the provisions dealing with Jewish settlement west of the Jordan River.[5] Two other events in the history of Jordan affected its demographics, the outcomes of the 1948 and the 1967 conflicts with Israel.

Most of the Arabic citizens in Jordan are villagers. The nature of their traditional nomadic culture reflected the population distribution in that although there were some 56,000 Bedouin Arabs at the turn of the 20th century on the plain east of Jordan, even after the First World War Amman was only a village of a few thousand residents,[6] many recent immigrants from the coastal areas of the Ottoman Syria where most of the fighting took place. By 1956 of the 1.5 million population, 200,000 were residing in Amman.[6] Following the 1948 war, and seizure of what later came to be known as the "West Bank" the citizens of Transjordan numbered about 1,185,000: 375,000 Transjordanians, 460,000 former residents of Mandate Palestine and 350,000 refugees from other former Mandate Palestine areas.[7] Of the 100,000 estimated Transjordanians on the west bank about half had migrated elsewhere by early 1950s.[8] In 2004 ethnic Arabs represented 93% of the population.

Jordan's population includes at least one significant minority, and several that have resided in the country even before its creation.

There is an Assyrian population in Jordan. Many Assyrians have arrived in Jordan since the invasion of Iraq, making up a large part of the Iraqi refuguees.

Armenians in Jordan are ethnic Armenians living within the current Kingdom of Jordan. There were an estimated 5,000 Armenians living within the country in 2009,.[9] An estimated 4,500 of these are members of the Armenian Apostolic Church,[9] and predominantly speak the Western dialect[10] of the Armenian language. This population makes up the majority of non-Arab Christians in the country.[11]

Circassians obtained Ottoman citizenships since 1887, immigrated to Jordan and they selected Amman despite it being a small village and a pile of ruins due to having been destroyed by several earthquakes.[12] They settled in several villages such as Jerash and Zarqa, and established their own villages Wadi Al Seer, Naour, and Suweleh.

The Adyghes Circassians played a major role in the history of Transjordan era, and are famous for their loyalty to Abdullah I of Jordan and his family, obtaining the Transjordan citizenship before many other Jordanian tribes in the law of citizenship that was issued in 1928,[13] while other tribes obtained their citizenship in 1930 or later[14]

Over the years various Adyghes have served in distinguished roles in the Kingdom of Jordan, including a prime minister (Sa`id al-Mufti), ministers (commonly at least one minister should represent the Circassians in each cabinet), high ranking officers, etc. Due to their important role in the history of Jordan, Adyghe form the Hashemites Honor guard at the Royal palaces, and represented Jordan in the Royal Edinburgh Military Tattoo in 2010, joining other Honor guards such as the The Airborne Ceremonial Unit.[15][16] The Circassians are Sunni Muslims estimated to number 120,000 persons, or 2% of Jordanian population, while accounting for 5% of Amman's residents.

Until recently most Mandaeans were Iraqi, but this religious minority fled the country in the face of this violence, and the Mandaean community in Iraq faces extinction.[17] Out of the over 60,000 Mandaeans in Iraq in the early 1990s, only about 5,000 to 7,000 remain there; as of early 2007, over 80% of Iraqi Mandaeans were refugees in Syria and Jordan as a result of the Iraq War.

There are about 10,000 Chechens estimated to reside in Jordan.

Jordan's population is estimated to be 95% Sunni Muslims.

The era of King Hussein saw increased school enrollment rates, which resulted in a rapid rise in the literacy rate in Jordan. At the beginning of his reign in 1952 the literacy rate was 33% and grew to 85% in 1996; according to the 2009 estimate, it is now 92.8% of the total population.[18]

Arabic is the official language of Jordan with only two other languages in use, Circassian and Syriac.[citation needed] English is widely understood among the educated and the upper and middle classes.

Initial integration of former residents of Mandate Palestine, and granting them citizenship, was revoked following violence against PLO in 1970. Most Iraqi refugees are not granted citizenship.