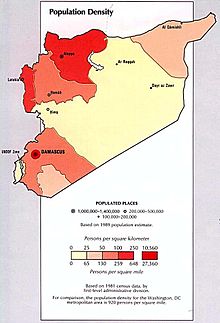 Syrians today are an overall indigenous Levantine people. While modern-day Syrians are commonly described as Arabs by virtue of their modern-day language and bonds to Arab culture and history. They are, in fact, largely a blend of the various Aramaic speaking groups indigenous to the region who were Arabized when Muslim Arabs from the Arabian Peninsula arrived and settled following the Arab expansion. During colonial years, the region had a fairly large minority of French settlers. Many of them stepped out after the recognition of Syrian independence, but their influence is still evident on fluency of French by the educated class in Syria. Syria's population is 74% Sunni Muslim, and 16% other Muslim groups, including the Alawi, Shi'a, and Druze, and 10% Christian, with a very small Syrian Jewish community.

1,500 people of Greek descent live in Syria. The majority of them are Syrian citizens.[1]

Arabic is the official, and most widely spoken, language. Arabic speakers, including some 400,000 Palestinians, make up 85% of the population. Many educated Syrians also speak English or French, but English is more widely understood. The Kurds, many of whom speak Kurdish, make up 9% [2] of the population and live mostly in the northeast corner of Syria, though sizable Kurdish communities live in most major Syrian cities as well. Armenian and Turkmen are spoken among the small Armenian and Turkmen populations respectively. Neo-Aramaic is still used by Assyrians and in some villages in the Anti-Lebanon mountains.

Most people live in the city of Aleppo, the Euphrates valley or along the coastal plain; a fertile strip between the coastal mountains and the desert. Overall population density is about 118.3/km² (306.5 per sq. mi.) Education is free and compulsory from ages 6 to 11. Schooling consists of 6 years of primary education followed by a 3-year general or vocational training period and a 3-year academic or vocational program. The second 3-year period of academic training is required for university admission. Total enrollment at post-secondary schools is over 150,000. The literacy rate of Syrians aged 15 and older is 86.0% for males and 73.6% for females.[3]

Ancient Syria's cultural and artistic achievements and contributions are many. Archaeologists have discovered extensive writings and evidence of a brilliant culture rivaling those of Mesopotamia and Egypt in and around the ancient city of Ebla. Later Syrian scholars and artists contributed to Hellenistic and Roman thought and culture. Zeno of Sidon founded the Epicurean school; Cicero was a pupil of Antiochus of Ascalon at Athens; and the writings of Posidonius of Apamea influenced Livy and Plutarch. Syrians have contributed to Arabic literature and music and have a proud tradition of oral and written poetry. Although declining, the handicraft industry still employs thousands.

Demographics of Syria, Data of FAO, year 2007 ; Number of inhabitants in thousands.

The following demographic statistics are from the CIA World Factbook, unless otherwise indicated.[4]

Arabs 90%, other ethnic groups such as Kurds, Assyrians/Syriacs, Armenians, Circassians, and Syrian Turkmen[2]