Ottoman Syria is a European reference to the area that during European Renaissance from the late 15th to early 18th century was called the Levant within the early period of the Ottoman Empire[2], the Orient until the early 19th century, and Greater Syria until 1918. Territory of the Greater Syria under the Ottoman rule in its final historical period included modern Syria, Lebanon, Israel, the West Bank, Gaza Strip, Jordan, and parts of Turkey and Iraq.

Before 1516, historical or Greater Syria was part of the Mamluk Empire centered in Egypt. The Ottoman Sultan Selim I conquered Syria in 1516 after defeating the Mamlukes at the Battle of Marj Dabiq near Aleppo in northern Syria. Selim carried on his victorious campaign against the Mamlukes and conquered Egypt in 1517 following the Battle of Ridanieh, bringing an end to the Mamluk Sultanate.

When he first seized Syria in 1516, Selim I kept the administrative subdivisions of the Mamluk period unchanged. After he came back from Egypt in July 1517, he reorganized Syria into one large province or eyalet named Şam (Arabic/Turkish for "Syria"). The eyalet was subdivided into several districts or sanjaks.

The Principality of Lebanon was awarded to Prince Fakhr al-Din I of the Maan dynasty after aiding the Sultan defeat the Mamluks at the Battle of Marj Dabiq. The principality consisted mainly of today's Lebanon with the exception of the cities of Tripoli and Saida. It was a Constitutional Monarchy ruled by a prince first from the Maan Dynasty followed by the Chihabs. The Principality remained as a semi-independent entity within the Ottoman Empire until 1860 when it was replaced by another semi-independent regime known as the Mutasarrifate.

In 1549, Syria was reorganized into two eyalets. The northern Sanjak of Aleppo became the center of the new Eyalet of Aleppo. At this time, the two Syrian Eyalets were subdivided as follows:

In 1579, the Eyalet of Tripoli was established under the name of Tripoli of Syria (Turkish:Trablusşam) (Arabic: طرابلس الشام). At this time, the eyalets became as follows:

The Eyalet of Aleppo included the Sanjaks of Aleppo, Adana, Marash, Aintab, and Urfa.

The Eyalet of Tripoli included the Sanjaks of Tripoli, Latakia, Hama and Homs. 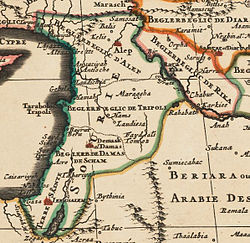 Following the massacre of thousands of Christian civilians during the 1860 Lebanon conflict, and under a growing European pressure, mainly from France, an Ottoman edict issued in 1861 transformed "Al Kaimaqumyateen," the former regime based on religious rule that led to civil war, into the Mutesarrifiyyet governed by a Mutasarrıf who according to law had to be a non-Lebanese Christian .

As part of the Tanzimat reforms, an Ottoman law passed in 1864 provided for a standard provincial administration throughout the empire with the Eyalets becoming smaller Vilayets governed by a Wali or governor still appointed by the Porte but with new provincial assemblies participating in administration.

In 1874, Jerusalem became a Mutesarrifiyyet gaining a special administrative status. 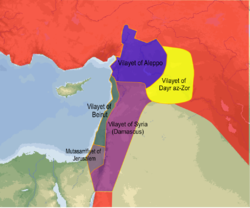 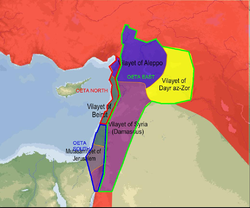