Decline of the Ottoman Empire

After Mahmud II was enthroned he had to deal with multiple issues. The clouds that hung over the reign of Mahmud II became long lasting issues inherited from generations. The Eastern Question with Russia, England, and France. Military problems arose from mutinous Janissaries, and factious Ulemas. He also faced numerous internal conflicts with Egyptians, Wahabbis, Serbians, Albanians, Greeks and Syrians, and had administrative problems from rebellious pashas, who would fain have founded new kingdoms on the ruins of the House of Osman.

He could understand the growing problems of a state, and the approaching overthrow of a monarchy, but rest content with the calculation, that the means and appliances of pomp and indulgence were safe for his life at least, and that after him might come the deluge. The problems that Mahmud saw around him were gigantic, and he gave up the repose of his seraglio to grapple with them. He closed the Court of Confiscations, and took away much of the power of the pashas.

In 1839, the Hatt-i Sharif that launched the Tanzimat (reform and reorganization) period. Previous to the first of the Firmans the property of all persons banished or condemned to death was forfeited to the crown; and a sordid motive for acts of cruelty was thus kept in perpetual operation, besides the encouragement of a host of vile Delators. The second firman removed the ancient rights of Turkish governors to doom men to instant death by their will; the Paşas, the Ağas, and other officers, were enjoined that "they should not presume to inflict, themselves, the punishment of death on any man, whether Raya or Turk, unless authorized by a legal sentence pronounced by the Kadi, and regularly signed by the judge." Mahmud also created an appeal system by a criminal to one of the Kazaskers of Asia or Europe, and finally to the Sultan himself, if the criminal chose to persist in his appeal.

About the same time that Mahmud II ordained these changes, he personally set an example of reform by regularly attending the Divan, or state council, instead of secluding himself from the labors of state. The practice of the Sultan avoiding the Divan had been introduced as long ago as the reign of Suleiman I, and was considered as one of the causes of the decline of the Empire by a Turkish historian nearly two centuries before Mahmud II's time.

Mahmud II also addressed some of the worst abuses connected with the Vakifs, by placing their revenues under state administration. However, he did not venture to apply this vast mass of property to the general purposes of the government.

In his time the financial situation of the Empire was troubling, and certain social classes had long been oppressed under difficult taxes. In dealing with the complicated questions that therefore arose, Mahmud II is considered to have demonstrated the best spirit of the best of the Köprülüs. A Firman of February 22, 1834 abolished the vexatious charges which public functionaries, when traversing the provinces, had long been accustomed to take from the inhabitants. By the same edict all collection of money, except for the two regular half-yearly periods, was denounced as abuses. "No one is ignorant," said Sultan Mahmud II in this document, "that I am bound to afford support to all my subjects against vexatious proceedings; to endeavour unceasingly to lighten, instead of increasing their burdens, and to ensure peace and tranquility. Therefore, those acts of oppression are at once contrary to the will of God, and to my imperial orders."

The haraç, or capitation-tax, though moderate and exempting those who paid it from military service, had long been made an engine of gross tyranny through the insolence and misconduct of the government collectors. The Firman of 1834 abolished the old mode of levying it, and ordained that it should be raised by a commission composed of the Kadı, the Muslim governors, and the Ayans, or municipal chiefs of Rayas in each district. Many other financial improvements were effected. By another important series of measures, the administrative government was simplified and strengthened, and a large number of sinecure offices were abolished. Sultan Mahmud II provided a valuable personal example of good sense, and economy, organising the imperial household, suppressing all titles without duties, and all salaried officials without functions.

One of Mahmud II's most notable achievements was the abolition of the Janissary corps in 1826, the establishment of a modern Ottoman Army, and the preparation of the Tanzimat reforms in 1839, which marked the beginning of the modernization of Turkey, and had immediate effects, such as introducing European-style clothing, architecture, legislation, institutional organization and land reform.

Later in his reign, Mahmud became involved in disputes with the Wāli of Egypt and Sudan, Muhammad Ali, who was technically Mahmud's vassal. The Sultan had asked for Muhammad Ali's help in suppressing a rebellion in Greece, but had not paid the promised price for his services. In 1831, the Muhammad Ali declared war, and managed to take control of Syria, and Arabia by the war's end in 1833. In 1839, Mahmud resumed the war, hoping to recover his losses, but at the very time he died, the news was on its way to Constantinople that the Empire's army had been signally defeated at Nezib by an Egyptian army led by Muhammad Ali's son, Ibrahim Pasha.

See also: Rise of nationalism under the Ottoman Empire 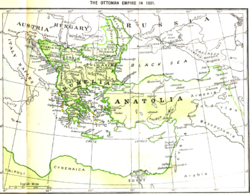 The Crimean War was fought between the Russian Empire on one side and an alliance of France, the United Kingdom, the Kingdom of Sardinia (which would be absorbed into Italy in 1861), and the Ottoman Empire on the other. The war was part of a long-running contest between the major European powers for influence over territories of the declining Ottoman Empire. Most of the conflict took place on the Crimean Peninsula, with additional actions occurring in western Turkey and the Baltic Sea region.

See: for the Sultan info Sultan Abd-ul-Aziz of the Ottoman Empire

The rise of national awakening of Bulgaria led to the Bulgarian revival movement. Unlike Greece and Serbia, the nationalist movement in Bulgaria did not concentrate initially on armed resistance against the Ottoman Empire. After the establishment of the Bulgarian Exarchate on February 28, 1870 a large-scale armed struggle movement started to develop as late as the beginning of the 1870s with the establishment of the Internal Revolutionary Organisation and the Bulgarian Revolutionary Central Committee, as well as the active involvement of Vasil Levski in both organisations. The struggle reached its peak with the April Uprising which broke out in April, 1876 in several Bulgarian districts in Moesia, Thrace and Macedonia. The barbaric suppression of the uprising and the atrocities committed by Ottoman soldiers (around 15,000 civilians murdered)[1] against the civilian population increased the Bulgarian desire for independence. 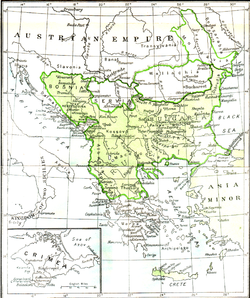 The First Constitutional Era of the Ottoman Empire was the period of constitutional monarchy from the promulgation of the Kanûn-ı Esâsî (meaning "Basic Law" in Ottoman Turkish), written by members of the Young Ottomans, on 23 November 1876 until 13 February 1878. The era ended with the suspension of the Ottoman parliament by Abdülhamid II.

The Russo-Turkish War of 1877–1878 had its origins in a rise in nationalism in the Balkans as well as in the Russian goal of recovering territorial losses it had suffered during the Crimean War, reestablishing itself in the Black Sea and following the political movement attempting to free Balkan nations from the Ottoman Empire. As a result of the war, the principalities of Romania, Serbia and Montenegro, each of which had de facto sovereignty for some time, formally proclaimed independence from the Ottoman Empire. After almost half a millennium of Ottoman domination (1396-1878), the Bulgarian state was reestablished as the Principality of Bulgaria, covering the land between the Danube River and the Balkan Mountains (except Northern Dobrudja which was given to Romania) and the region of Sofia, which became the new state's capital. The Congress of Berlin also allowed Austria-Hungary to occupy Bosnia and Herzegovina and Great Britain to take over Cyprus, while the Russian Empire annexed Southern Bessarabia and the Kars region. 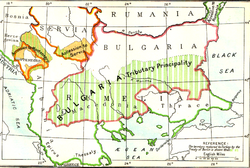 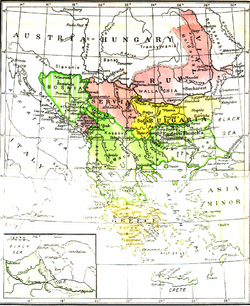