The Music of Hong Kong is an eclectic mixture of traditional and popular genres. Cantopop is one of the more prominent genres of music produced in Hong Kong. The Hong Kong Philharmonic Orchestra and the Hong Kong Sinfonietta regularly perform western classical music in the city. There is also a long tradition of Cantonese opera within Hong Kong.

In colonial Hong Kong, pipa was one of the instruments played by the Chinese,[1] and was mainly used for ceremonial purposes. Western classical music was, on the other hand, the principal focus amongst British Hong Kongers with the Sino-British Orchestra being established in 1895. In the beginning of 20th century, Western pop music became popular. Mandarin pop songs in the 1920s were called Si Doi Kuk (時代曲). They are considered the prototype of Chinese pop songs.[2]

In 1949 the People's Republic of China was established by the communist party. One of the first actions taken by the government was to denounce popular music as pornography.[3] Beginning in the 1950s massive waves of immigrants fled from Shanghai to Hong Kong.[4] Along with it was the Pathé Records (Hong Kong) record company, which ended up becoming one of the most significant popular record companies in Hong Kong.

The 1960s was marked by the rise of Hong Kong English pop which peaked until the mid-1970s among both British and Upper Middle/Upper class ethnic Chinese Hong Kongers. After the Chinese language had become an official language in 1974, Cantopop's popularity increased sharply due to the improved status of the language and the large Cantonese Chinese population in the city. Traditional Chinese Huangmei opera, on the other hand, had peaked in the 1960s amongst the general Chinese population.

Prior to the development of popular music in the 1960s, Hong Kong's musical output was dominated by Cantonese opera and English pop. Prominent singers included Tang Kee-chan (鄧寄塵), Cheng Kuan-min (鄭君綿). The godfather of Cantopop Roman Tam (羅文) made significant strides in the industry. The youth began to gravitate towards Cantonese pop in the 70s.

Around 1971, Sandra Lang (仙度拉) was invited to sing the first Cantonese TV theme song, "The Yuanfen of a Wedding that Cries and Laughs" (啼笑姻緣). This song was the creation of the legendary songwriter Joseph Koo (顧嘉輝) and the songwriter Yip Siu-dak (葉紹德). The genre was launched to unprecedented levels with virtually every TV drama using localised cantopop songs. Another big name singer was Paula Tsui.

While TV theme songs are still an important part of Hong Kong music, the arrival of the Four Heavenly Kings (四大天王) took Cantopop a stage higher. Today, Cantopop is the dominant form of music with strong associations to pop culture. Record companies have had a majority stake in the segment, and Hong Kong is considered the central hub of Cantopop in the world.[5]

Mandarin on the other hand dominated the language of cinematography until the emergence of Cantonese counterparts in the mid-1970s. Many singers from Taiwan came to Hong Kong creating a spectrum of Mandarin pop. The period ended in its height with Teresa Teng. Her songs were popular even in mainland China. Mandarin pop will likely continue to gain in popularity, especially after the 1997 handover which made Mandarin one of the standard languages under Basic Law. One of the TV series that emulate the 60s/70s mandopop club scene in Hong Kong is the TVB series Glittering Days. 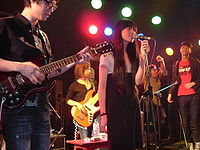 The term English pop in Hong Kong does not mean pop music from England, but western style pop songs sung in the English language. In the 1950s, popular music of Hong Kong was largely dominated by pop songs in the English language until the Cantopop's emergence in the mid-1970s. Many well-known Cantopop singers of today, like Sam Hui and Alan Tam, began their early careers singing in English. Western culture at the time was specifically a mark of education and sophistication.[6] Inspired and influenced by imported popular music from the West such as Elvis Presley, Johnny Mathis and The Beatles,[3] Hong Kong artistes started to produce English language pop music in the 1960s.

The art form is one of the first organised forms of entertainment in Hong Kong. The art form still exists today in its traditional format despite the changing trends in other industries. There is a debate about the origin(s) of Cantonese opera, but it is universally accepted that the predecessors of Cantonese opera originated from the northern part of China and slowly migrated to the southern province of Guangdong in late 13th century, during the late Southern Song Dynasty. Beginning in the 1950s, massive waves of immigrants fled Shanghai to destinations like North Point,[4] boosting its fanbase.