Islam is the official religion of the Islamic Republic of Pakistan, which has a population of about 174,578,558.[1] The overwhelming majority (95-97%) of the Pakistani people are Muslims while the remaining 3-5% are Christian, Hindu, and others.[2][3] Pakistan has the second largest Muslim population in the world after Indonesia.[4] Sunnis are the majority while the Shias make up between 5-20%[5][6][3][7][2] of the total Muslim population of the country. Pakistan has the second largest number of Shias after Iran, which numbers between 17 million to as high as 30 million according to Vali Nasr.[8]

Umayyad invasion of Sindh and the arrival of Islam

The Badshahi Masjid, literally the 'Royal Mosque', was built in 1674 by Aurangzeb. It is one of Lahore's best known landmarks, and epitomizes the beauty and grandeur of the Mughal era.

Islam arrived in the area of modern Pakistan in 711 CE, when the Umayyad dynasty sent a Muslim Arab army led by Muhammad bin Qasim against the ruler of Sindh, Raja Dahir. Muhammad Bin Qasim's army was defeated in his first three attempts. The Muslim army conquered the northwestern part of Indus Valley from Kashmir to the Arabian Sea. The arrival of the Arab Muslims to the provinces of Sindh and Punjab, along with subsequent Muslim dynasties, set the stage for the religious boundaries of South Asia that would lead to the development of the modern state of Pakistan as well as forming the foundation for Islamic rule which quickly spread across much of South Asia. Following the rule of various Islamic empires, including the Ghaznavid Empire, the Ghorid kingdom, and the Delhi Sultanate, the Mughals controlled the region from 1526 until 1739. Muslim technocrats, bureaucrats, soldiers, traders, scientists, architects, teachers, theologians and Sufis flocked from the rest of the Muslim world to Islamic Sultanate and Mughal Empire in South Asia and in the land that became Pakistan.

Islam and the Pakistan Movement

The Muslim poet-philosopher Sir Allama Muhammad Iqbal first proposed the idea of a Muslim state in northwestern South Asia in his address to the Muslim League at Allahabad in 1930. His proposal referred to the four provinces of Punjab, Sindh, Balochistan, and the NorthWest Frontier -- essentially what would became Pakistan. Iqbal's idea gave concrete form to two distinct nations in the South Asia based on religion (Islam and Hinduism) and with different historical backgrounds, social customs, cultures, and social mores.

Islam was thus the basis for the creation and the unification of a separate state. Allama Muhammad Iqbal in 1937, in a letter to Jinnah wrote, After a long and careful study of Islamic Law I have come to the conclusion that if this system of Law is properly understood and applied, at last the right to subsistence is secured to every body. But the enforcement and development of the Shariat of Islam is impossible in this country without a free Muslim state or states. This has been my honest conviction for many years and I still believe this to be the only way to solve the problem of bread for Muslims as well as to secure a peaceful India.[9] But just three days before the creation of Pakistan, Mohammad Ali Jinnah made a different commitment. A commitment to secularism in Pakistan. In his inaugural address he said, You will find that in the course of time Hindus would cease to be Hindus and Muslims would cease to be Muslims, not in the religious sense, because that is the personal faith of each individual, but in the political sense as citizens of the State. This statement of Jinnah is an object of great controversy since then and this vision of a Pakistan in which Islamic law would not be applied, contrary to Iqbal's perception, was questioned shortly after independence. 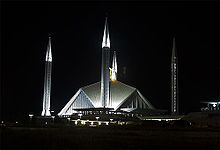 Faisal Mosque in Islamabad, which is the largest mosque of Pakistan and is also one of the largest in the world, was built by King Faisal of Saudi Arabia.

From the outset, politics and religion have been intertwined both conceptually and practically in Islam. Because Prophet Muhammad established a government in Medina, precedents of governance and taxation exist. Through the history of Islam, from the Ummayyad (661-750) and Abbasid empires (750-1258) to the Mughals (1526- 1858), Safavis (1501–1722) and the Ottomans (1300-1923), religion and statehood have been treated as one. Indeed, one of the beliefs of Islam is that the purpose of the state is to provide an environment where Muslims can properly practice their religion. If a leader fails in this, the people have a right to depose him.

In March 1949, the first constituent assembly passed Objectives Resolution, which declared that the state of Pakistan will be submitted to the sovereignty of God. In 1950, thirty one Ulema passed a demand draft, called Twenty Two Points of Ulema. This drafted demanded preparation of constitution according to Objectives Resolution. It also demanded changes in the law according to Shariah.

In 1977, the government of Zulfiqar Ali Bhutto outlawed alcohol and drugs and changed the weekend from Sunday to Friday, but no substantive Islamic reform program was implemented prior to General Zia-ul-Haq's Islamization program. Starting in February 1979, new penal measures based on Islamic principles of justice went into effect. These carried considerably greater implications for women than for men. A welfare and taxation system based on Zakat and a profit-and-loss banking system were also established in accordance with Islamic prohibitions against usury but were inadequate. 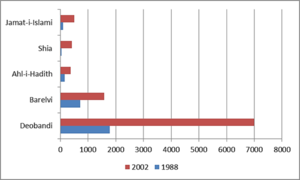 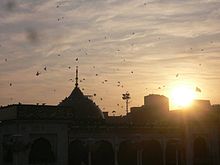 The famed Data Durbar shrine of Sufi saint Hazrat Ali Hujweiri in Lahore, is a famous for devotees from over the world.

According to the CIA World Factbook and Oxford Centre for Islamic Studies, 95-97% of the total population of Pakistan is Muslim.[3] The majority of the Pakistani Muslims belong to the Sunni Hanafi Madhhab (school of jurisprudence[11]), while Shia Ithna 'ashariyah are estimated 10-20%.[12][6][3][7][2] .

The two subsects of Sunnis in Pakistan, the Barelvis and Deobandis, have their own Masjids. According to the conservative think tank The Heritage Foundation the majority of Sunni in Pakistan follows Barelvi traditions.[13] Another source (Global Security) estimates that 50% of Pakistanis Muslims are Barelvi, 20% Deobandi, 18% Shi'a, 4% Ahl al-Hadith, 2% Ismaili, 2% Ahmadiyyah and other 2%.[14]

The Shi'a Ithna 'ashariyah school has its own Masjids and Hussainias (Imambargahs). Mustaali Dawoodi Bohra and Sulaimani Bohra also have their own Masjids, while the Nizari Ismailis have Jama'at Khanas. Although the vast majority of Pakistani Shi'a Muslims belong to Ithna 'ashariyah school, there are significant minorities: Nizari Ismailis (Agha Khanis) and the smaller Mustaali Dawoodi Bohra and Sulaimani Bohra branches. The Salafi school is represented by the Ahle Hadith movement in Pakistan.

Many people on the Makran coast of Balochistan follow the heterodox Zikri sect of Islam. Zikri sect developed within Sunni Hanafis during the 18th century Mahdi movement as a reaction to decline of the Muslim rule and encroaching British colonialism in South Asia. Zikris are now gravitating back towards orthodox Sunni Hanafi beliefs.

Sufism has a strong tradition in Pakistan. The Muslim Sufi missionaries played a pivotal role in converting the millions of native people to Islam. As in other areas where Sufis introduced it, Islam to some extent syncretized with pre-Islamic influences, resulting in a religion with some traditions distinct from other parts of the Muslim world. The Naqshbandiya, Qadiriya, Chishtiya and Suhrawardiyya silsas (Muslim Orders) have a a large following in Pakistan. Sufis whose shrines receive much national attention are Data Ganj Baksh (Ali Hajweri) in Lahore (ca. 11th century), Baha-ud-din Zakariya in Multan and Shahbaz Qalander in Sehwan (ca. 12th century) and Shah Abdul Latif Bhitai in Bhit, Sindh and Rehman Baba in Khyber Pakhtunkhwa Province.

The Ahmadiyya community, a minority group is also present. In 1974, the government of Pakistan amended the Constitution of Pakistan to define a Muslim "as a person who believes in finality of Prophet Muhammad".[15] Ahmadis believe in Muhammad as the best and the last law bearing prophet and Mirza Ghulam Ahmad as the Christ of Muslims. Consequently they were declared non-Muslims by a parliamentary tribunal. According to the last Pakistan census, Ahmadis made 0.25% of the population.

There is no law in Pakistan enforcing hijab and wearing of Hijab by Pakistani women is fairly uncommon. However, the practice of wearing Hijab among younger women in urban centers is slowly growing due to media influence from the Middle East and Persian Gulf countries.

The episodes of sectarian violence have significantly decreased in frequency over the years due to the conflictual engagement of the Islamic militant organizations with the state's armed forces and intelligence agencies.

Media and pilgrimages has influenced Pakistani Muslims to learn more about Islam as a result the local folk beliefs and practices are progressively being replaced with orthodox beliefs from Quran and Sunnah. The inexpensive travel, simpler visa rules and direct air travel to Saudi Arabia has resulted in large number Pakistani Muslims going to Medina and Mecca for Haj and Umrah. This has helped to increase Pan-Islamic identity of Pakistani Muslims. The Muslim print media has always existed in Pakistan which included newspapers, books and magazines. The Muslim satellite channels are widely available and are watched by Pakistani population.

The Islamiat, study of Islam, as a subject is compulsory for all Muslim students up to Matriculation (O'levels, Tenth grade) in all schools in Pakistan. Islamic education to the masses is also propagated mainly by Islamic schools and literature. Islamic schools (or Madrassas) mostly cater to the youth from impoverished social backgrounds and those learning to be Islamic clerics. More casual and even research oriented material is available in the form of books. While the most prominent of these schools are supervised, the latter are being 'moderated' by both the government and some of the scholars, thereby also removing in the process the various material present in it that is used by anti-Muslim writers. Oldest and universally accepted titles such as the Sahih Bukhari have been revised into 'summarised' editions and some of the old, complete titles, translated to Urdu, the national language, are not available for purchase now. These changes are also a herald to new outbreaks of religious controversy in the region.