Islam in the United Kingdom

Islam in the United Kingdom 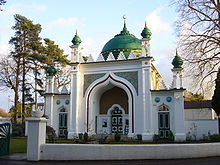 Shah Jahan Mosque, one of the oldest mosques in UK

Islam has been present in the United Kingdom since its formation in 1707,[1] though it was not legally recognised until the Trinitarian Act in 1812. Today it is the second largest religion in the country with estimates suggesting that by 2010 the total Muslim population had reached 2.869 million.[2][3]

The growing number of Muslims has resulted in the establishment of more than 1,500 mosques.[4] The majority of mosques are Sunni; in 2010, the affiliation of the mosques was, 65% Deobandi, 20% Barelvi, 6% Salafi, 3% Maudoodi-inspired; of the remainder many were part of other Sunni traditions or unaffiliated, while 66 were Shi'a (4%). The majority of mosque managers are of Pakistani and Bangladeshi origin, with many Gujarati, and fewer Arab, Turkish and Somali managed entities.[5]

A 2009 survey of the attitudes of British Muslims found them to identify more strongly with the UK than the rest of the population, with a much higher regard for the country's institutions, and to be more tolerant towards people of other religions.[7] However, the vast majority of them have strongly conservative views on moral issues such as homosexuality and extra-marital sex, both differing dramatically from those held by the rest of the British population.[7]

The emergence of the right wing English Defence League has resulted in demonstrations in British cities with large muslim populations.[12][13][14][15][16]