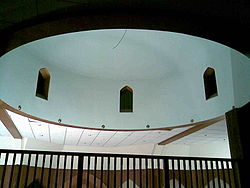 The interior of the dome inside the North London Central Mosque

North London Central Mosque in Finsbury Park, London was built in the 1990s to serve the large Muslim population in the area. It has a capacity of 1,800 people.[citation needed]

Until 2005 it was known as Finsbury Park Mosque. The mosque was riven with leadership disputes in the 1990s, allowing extremist Islamist preachers (many of whom were refugees from the Algerian Civil War) to take it over. In 1996 they installed Abu Hamza al-Masri as imam of the mosque, which subsequently developed a reputation as a centre of radical Islamism in London.[1]

The main building was opened in 1994 in a ceremony attended by Prince Charles. The Mosque is located opposite Finsbury Park station, close to Arsenal Football Club's Emirates Stadium.[2]

Al Qaeda operatives including "shoebomber" Richard Reid and Zacarias Moussaoui attended the Mosque.[3] In 2002, The Guardian reported that weapons training had taken place inside the building.[4]

On 3 October 2004, The Observer revealed that 46-year-old Kamel Rabat Bouralha attended the mosque. Bouralha, with UK citizens Osman Larussi and Yacine Benalia, was loyal to Chechen warlord Shamil Basayev. Basayev has boasted of training the men who took control of the school in Beslan, Russia and wired it with explosives. Investigators believe that the three men, all Algerian-born, travelled to Chechnya from London to take part in fighting there in 2001. Like Bouralha, they are believed to have attended Finsbury Park mosque and to have joined the network of groups loyal to Basayev on arrival in Chechnya.

In 2003, over one hundred armed police raided the building as part of the investigation into the alleged Wood Green ricin plot.[5] Abu Hamza al-Masri was eventually jailed for seven years in 2006 after being convicted of inciting murder and race hate.[6]

Following the 2003 raid the Mosque was reclaimed by mainstream Muslims[clarification needed], including representatives pf the Muslim Association of Britain, who installed a new board of trustees and imam.[7] The Mosque now offers courses open to the general public, and weekly attendance has tripled.[citation needed] It is open for public visits, awareness weeks, community open days and it aims to promote Islam as a religion of tolerance and co-operation.[8]