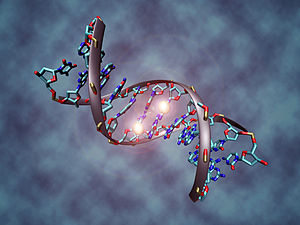 Illustration of a DNA molecule that is methylated at the two center cytosines. DNA methylation plays an important role for epigenetic gene regulation in development and disease.

DNA methylation is a biochemical process that is important for normal development in higher organisms. It involves the addition of a methyl group to the 5 position of the cytosine pyrimidine ring or the number 6 nitrogen of the adenine purine ring (cytosine and adenine are two of the four bases of DNA). This modification can be inherited through cell division.

DNA methylation is a crucial part of normal organismal development and cellular differentiation in higher organisms. DNA methylation stably alters the gene expression pattern in cells such that cells can "remember where they have been" or decrease gene expression; for example, cells programmed to be pancreatic islets during embryonic development remain pancreatic islets throughout the life of the organism without continuing signals telling them that they need to remain islets. DNA methylation is typically removed during zygote formation and re-established through successive cell divisions during development. However, the latest research shows that hydroxylation of methyl group occurs rather than complete removal of methyl groups in zygote.[1] Some methylation modifications that regulate gene expression are inheritable and are referred to as epigenetic regulation.

In addition, DNA methylation suppresses the expression of viral genes and other deleterious elements that have been incorporated into the genome of the host over time. DNA methylation also forms the basis of chromatin structure, which enables cells to form the myriad characteristics necessary for multicellular life from a single immutable sequence of DNA. DNA methylation also plays a crucial role in the development of nearly all types of cancer.[2]

DNA methylation at the 5 position of cytosine has the specific effect of reducing gene expression and has been found in every vertebrate examined. In adult somatic tissues, DNA methylation typically occurs in a CpG dinucleotide context; non-CpG methylation is prevalent in embryonic stem cells.[3][4][5]

DNA methylation is essential for normal development and is associated with a number of key processes including genomic imprinting, X-chromosome inactivation, suppression of repetitive elements, and carcinogenesis.

Between 60% and 90% of all CpGs are methylated in mammals.[6][7] Methylated C residues spontaneously deaminate to form T residues over evolutionary time; hence CpG dinucleotides steadily mutate to TpG dinucleotides, which is evidenced by the under-representation of CpG dinucleotides in the human genome (they occur at only 21% of the expected frequency).[8] (On the other hand, spontaneous deamination of unmethylated C residues gives rise to U residues, a mutation that is quickly recognized and repaired by the cell.)

Unmethylated CpGs are often grouped in clusters called CpG islands, which are present in the 5' regulatory regions of many genes. In many disease processes, such as cancer, gene promoter CpG islands acquire abnormal hypermethylation, which results in transcriptional silencing that can be inherited by daughter cells following cell division. Alterations of DNA methylation have been recognized as an important component of cancer development. Hypomethylation, in general, arises earlier and is linked to chromosomal instability and loss of imprinting, whereas hypermethylation is associated with promoters and can arise secondary to gene (oncogene suppressor) silencing, but might be a target for epigenetic therapy.[9]

DNA methylation may affect the transcription of genes in two ways. First, the methylation of DNA itself may physically impede the binding of transcriptional proteins to the gene, and second, and likely more important, methylated DNA may be bound by proteins known as methyl-CpG-binding domain proteins (MBDs). MBD proteins then recruit additional proteins to the locus, such as histone deacetylases and other chromatin remodeling proteins that can modify histones, thereby forming compact, inactive chromatin, termed heterochromatin. This link between DNA methylation and chromatin structure is very important. In particular, loss of methyl-CpG-binding protein 2 (MeCP2) has been implicated in Rett syndrome; and methyl-CpG-binding domain protein 2 (MBD2) mediates the transcriptional silencing of hypermethylated genes in cancer.

Research has suggested that long-term memory storage in humans may be regulated by DNA methylation.[10][11]

In mammalian cells, DNA methylation occurs mainly at the C5 position of CpG dinucleotides and is carried out by two general classes of enzymatic activities – maintenance methylation and de novo methylation.[citation needed]

Maintenance methylation activity is necessary to preserve DNA methylation after every cellular DNA replication cycle. Without the DNA methyltransferase (DNMT), the replication machinery itself would produce daughter strands that are unmethylated and, over time, would lead to passive demethylation. DNMT1 is the proposed maintenance methyltransferase that is responsible for copying DNA methylation patterns to the daughter strands during DNA replication. Mouse models with both copies of DNMT1 deleted are embryonic lethal at approximately day 9, due to the requirement of DNMT1 activity for development in mammalian cells.

Since many tumor suppressor genes are silenced by DNA methylation during carcinogenesis, there have been attempts to re-express these genes by inhibiting the DNMTs. 5-Aza-2'-deoxycytidine (decitabine) is a nucleoside analog that inhibits DNMTs by trapping them in a covalent complex on DNA by preventing the β-elimination step of catalysis, thus resulting in the enzymes' degradation. However, for decitabine to be active, it must be incorporated into the genome of the cell, which can cause mutations in the daughter cells if the cell does not die. In addition, decitabine is toxic to the bone marrow, which limits the size of its therapeutic window. These pitfalls have led to the development of antisense RNA therapies that target the DNMTs by degrading their mRNAs and preventing their translation. However, it is currently unclear whether targeting DNMT1 alone is sufficient to reactivate tumor suppressor genes silenced by DNA methylation.

It is not clear how the cell determines the locations of de novo DNA methylation, but evidence suggests that, for many (though not all) locations, RNA-directed DNA methylation (RdDM) is involved. In RdDM, specific RNA transcripts are produced from a genomic DNA template, and this RNA forms secondary structures called double-stranded RNA molecules.[15] The double-stranded RNAs, through either the small interfering RNA (siRNA) or microRNA (miRNA) pathways direct de-novo DNA methylation of the original genomic location that produced the RNA.[15] This sort of mechanism is thought to be important in cellular defense against RNA viruses and/or transposons, both of which often form a double-stranded RNA that can be mutagenic to the host genome. By methylating their genomic locations, through an as yet poorly-understood mechanism, they are shut off and are no longer active in the cell, protecting the genome from their mutagenic effect.

It can be seen that many fungi have low levels (0.1 to 0.5%) of cytosine methylation, whereas other fungi have as much as 5% of the genome methylated.[16]

This value seems to vary both among species and among isolates of the same species.[17] There is also evidence that DNA methylation may be involved in state-specific control of gene expression in fungi.[citation needed]

Adenine or cytosine methylation is part of the restriction modification system of many bacteria, in which specific DNA sequences are methylated periodically throughout the genome. A methylase is the enzyme that recognizes a specific sequence and methylates one of the bases in or near that sequence. Foreign DNAs (which are not methylated in this manner) that are introduced into the cell are degraded by sequence-specific restriction enzymes and cleaved. Bacterial genomic DNA is not recognized by these restriction enzymes. The methylation of native DNA acts as a sort of primitive immune system, allowing the bacteria to protect themselves from infection by bacteriophage.

E. coli DNA adenine methyltransferase (Dam) is an enzyme of ~32 kDa that does not belong to a restriction/modification system. The target recognition sequence for E. coli Dam is GATC, as the methylation occurs at the N6 position of the adenine in this sequence (G meATC). The three base pairs flanking each side of this site also influence DNA–Dam binding. Dam plays several key roles in bacterial processes, including mismatch repair, the timing of DNA replication, and gene expression. As a result of DNA replication, the status of GATC sites in the E. coli genome changes from fully methylated to hemimethylated. This is because adenine introduced into the new DNA strand is unmethylated. Re-methylation occurs within two to four seconds, during which time replication errors in the new strand are repaired. Methylation, or its absence, is the marker that allows the repair apparatus of the cell to differentiate between the template and nascent strands. It has been shown that altering Dam activity in bacteria results in increased spontaneous mutation rate. Bacterial viability is compromised in dam mutants that also lack certain other DNA repair enzymes, providing further evidence for the role of Dam in DNA repair.

Expression of certain genes, for example those coding for pilus expression in E. coli, is regulated by the methylation of GATC sites in the promoter region of the gene operon. The cells' environmental conditions just after DNA replication determine whether Dam is blocked from methylating a region proximal to or distal from the promoter region. Once the pattern of methylation has been created, the pilus gene transcription is locked in the on or off position until the DNA is again replicated. In E. coli, these pilus operons have important roles in virulence in urinary tract infections. It has been proposed[by whom?] that inhibitors of Dam may function as antibiotics.

On the other hand, DNA cytosine methylase targets CCAGG and CCTGG sites to methylate cytosine at the C5 position (C meC(A/T)GG). The other methylase enzyme, EcoKI, causes mehtylation of adenine in the sequences AAC(N6A)GTGC and GCAC(N6A)GTT.

Most strains used by molecular biologists are derivatives of K-12, and possess both Dam and Dcm, but there are commercially available strains that possess dam-/dcm- activity. In fact, it is possible to unmethylate the DNA extracted from dam+/dcm+ strains by transforming into dam-/dcm- strains. This would help digest sequences that are not being recognized by methylation-sensitive restriction enzymes.[19][20]

DNA methylation can be detected by the following assays currently used in scientific research: