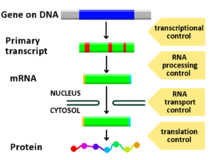 Regulation of gene expression (or gene regulation) includes the processes that cells and viruses use to regulate the way that the information in genes is turned into gene products. Although a functional gene product can be an RNA, the majority of known mechanisms regulate protein coding genes. Any step of the gene's expression may be modulated, from DNA-RNA transcription to the post-translational modification of a protein.

Gene regulation is essential for viruses, prokaryotes and eukaryotes as it increases the versatility and adaptability of an organism by allowing the cell to express protein when needed. Although in 1951, Barbara McClintock showed interaction between two genetic loci, Activator (Ac) and Dissociator (Ds), the first discovery of a gene regulation system is widely considered to be the identification in 1961 of the lac operon, discovered by Jacques Monod, in which protein involved in lactose metabolism are expressed by E. coli only in the presence of lactose and absence of glucose.

Furthermore, gene regulation drives the processes of cellular differentiation and morphogenesis, leading to the creation of different cell types in multicellular organisms where the different types of cells may possess different gene expression profiles though they all possess the same genome sequence.

Any step of gene expression may be modulated, from the DNA-RNA transcription step to post-translational modification of a protein. The following is a list of stages where gene expression is regulated, the most extensively utilised point is Transcription Initiation:

Methylation of DNA is a common method of gene silencing. DNA is typically methylated by methyltransferase enzymes on cytosine nucleotides in a CpG dinucleotide sequence (also called "CpG islands" when densely clustered). Analysis of the pattern of methylation in a given region of DNA (which can be a promoter) can be achieved through a method called bisulfite mapping. Methylated cytosine residues are unchanged by the treatment, whereas unmethylated ones are changed to uracil. The differences are analyzed by DNA sequencing or by methods developed to quantify SNPs, such as Pyrosequencing (Biotage) or MassArray (Sequenom), measuring the relative amounts of C/T at the CG dinucleotide. Abnormal methylation patterns are thought to be involved in oncogenesis.[citation needed]

Transcription of DNA is dictated by its structure. In general, the density of its packing is indicative of the frequency of transcription. Octameric protein complexes called nucleosomes are responsible for the amount of supercoiling of DNA, and these complexes can be temporarily modified by processes such as phosphorylation or more permanently modified by processes such as methylation. Such modifications are considered to be responsible for more or less permanent changes in gene expression levels.[citation needed]

Histone acetylation is also an important process in transcription. Histone acetyltransferase enzymes (HATs) such as CREB-binding protein also dissociate the DNA from the histone complex, allowing transcription to proceed. Often, DNA methylation and histone deacetylation work together in gene silencing. The combination of the two seems to be a signal for DNA to be packed more densely, lowering gene expression.[citation needed]

After the DNA is transcribed and mRNA is formed, there must be some sort of regulation on how much the mRNA is translated into proteins. Cells do this by modulating the capping, splicing, addition of a Poly(A) Tail, the sequence-specific nuclear export rates, and, in several contexts, sequestration of the RNA transcript. These processes occur in eukaryotes but not in prokaryotes. This modulation is a result of a protein or transcript that, in turn, is regulated and may have an affinity for certain sequences.

The translation of mRNA can also be controlled by a number of mechanisms, mostly at the level of initiation. Recruitment of the small ribosomal subunit can indeed be modulated by mRNA secondary structure, antisense RNA binding, or protein binding. In both prokaryotes and eukaryotes, a large number of RNA binding proteins exist, which often are directed to their target sequence by the secondary structure of the transcript, which may change depending on certain conditions, such as temperature or presence of a ligand (aptamer). Some transcripts act as ribozymes and self-regulate their expression.

A large number of studied regulatory systems come from developmental biology. Examples include:

Gene Regulation can be summarized by the response of the respective system:

In general, most experiments investigating differential expression used whole cell extracts of RNA, called steady-state levels, to determine which genes changed and by how much they did. These are, however, not informative of where the regulation has occurred and may actually mask conflicting regulatory processess (see post-transcriptional regulation), but it is still the most commonly analysed (QPCR and DNA microarray).

When studying gene expression, there are several methods to look at the various stages. In eukaryotes these include: