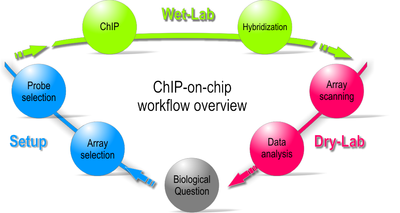 Workflow overview of a ChIP-on-chip experiment.

ChIP-on-chip (also known as ChIP-chip) is a technique that combines chromatin immunoprecipitation ("ChIP") with microarray technology ("chip"). Like regular ChIP, ChIP-on-chip is used to investigate interactions between proteins and DNA in vivo. Specifically, it allows the identification of the cistrome, sum of binding sites, for DNA-binding proteins on a genome-wide basis.[1] Whole-genome analysis can be performed to determine the locations of binding sites for almost any protein of interest.[1] As the name of the technique suggests, such proteins are generally those operating in the context of chromatin. The most prominent representatives of this class are transcription factors, replication-related proteins, like ORC, histones, their variants, and histone modifications. The goal of ChIP-on-chip is to localize protein binding sites that may help identify functional elements in the genome. For example, in the case of a transcription factor as a protein of interest, one can determine its transcription factor binding sites throughout the genome. Other proteins allow the identification of promoter regions, enhancers, repressors and silencing elements, insulators, boundary elements, and sequences that control DNA replication.[2] If histones are subject of interest, it is believed that the distribution of modifications and their localizations may offer new insights into the mechanisms of regulation. One of the long-term goals ChIP-on-chip was designed for is to establish a catalogue of (selected) organisms that lists all protein-DNA interactions under various physiological conditions. This knowledge would ultimately help in the understanding of the machinery behind gene regulation, cell proliferation, and disease progression. Hence, ChIP-on-chip offers not only huge potential to complement our knowledge about the orchestration of the genome on the nucleotide level, but also on higher levels of information and regulation as it is propagated by research on epigenetics.

The technical platforms to conduct ChIP-on-chip experiments are DNA microarrays, or "chips". They can be classified and distinguished according to various characteristics:

Besides the actual microarray, other hard- and software equipment is necessary to run ChIP-on-chip experiments. It is generally the case that one company’s microarrays can not be analyzed by another company’s processing hardware. Hence, buying an array requires also buying the associated workflow equipment. The most important elements are, among others, hybridization ovens, chip scanners, and software packages for subsequent numerical analysis of the raw data.

Workflow of a ChIP-on-chip experiment

Starting with a biological question, a ChIP-on-chip experiment can be divided into three major steps: The first is to set up and design the experiment by selecting the appropriate array and probe type. Second, the actual experiment is performed in the wet-lab. Last, during the dry-lab portion of the cycle, gathered data are analyzed to either answer the initial question or lead to new questions so that the cycle can start again.

Wet-lab portion of the workflow 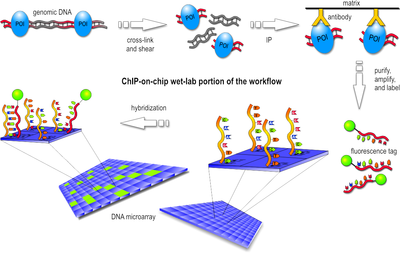 Workflow overview of the wet-lab portion of a ChIP-on-chip experiment.

Dry-lab portion of the workflow

Workflow overview of the dry-lab portion of a ChIP-on-chip experiment.

Using tiled arrays, ChIP-on-chip allows for high resolution of genome-wide maps. These maps can determine the binding sites of many DNA-binding proteins like transcription factors and also chromatin modifications.

Although ChIP-on-chip can be a powerful technique in the area of genomics, it is very expensive. Most published studies using ChIP-on-chip repeat their experiments at least three times to ensure biologically meaningful maps. The cost of the DNA microarrays is often a limiting factor to whether a laboratory should proceed with a ChIP-on-chip experiment. Another limitation is the size of DNA fragments that can be achieved. Most ChIP-on-chip protocols utilize sonication as a method of breaking up DNA into small pieces. However, sonication is limited to a minimal fragment size of 200 bp. For higher resolution maps, this limitation should be overcome to achieve smaller fragments, preferably to single nucleosome resolution. As mentioned previously, the statistical analysis of the huge amount of data generated from arrays is a challenge and normalization procedures should aim to minimize artifacts and determine what is really biologically significant. So far, application to mammalian genomes has been a major limitation, for example, due to a significant percentage of the genome that is occupied by repeats. However, as ChIP-on-chip technology advances, high resolution whole mammalian genome maps should become achievable.

Antibodies used for ChIP-on-chip can be an important limiting factor. ChIP-on-chip requires highly specific antibodies that must recognize its epitope in free solution and also under fixed conditions. If it is demonstrated to successfully immunoprecipitate cross-linked chromatin, it is termed "ChIP-grade". Companies that provide ChIP-grade antibodies include Abcam, Cell Signaling Technology, Santa Cruz, and Upstate. To overcome the problem of specificity, the protein of interest can be fused to a tag like FLAG or HA that are recognized by antibodies. An alternative to ChIP-on-chip that does not require antibodies is DamID.

A study demonstrating the non-specific nature of DNA binding proteins has been published in PLoS Biology. This indicates that alternate confirmation of functional relevancy is a necessary step in any ChIP-chip experiment.[5]

A first ChIP-on-chip experiment was performed in 1999 to analyze the distribution of cohesin along budding yeast chromosome III.[6] Although the genome was not completely represented, the protocol in this study remains equivalent as those used in later studies. The ChIP-on-chip technique using all of the ORFs of the genome (that nevertheless remains incomplete, missing intergenic regions) was then applied successfully in three papers published in 2000 and 2001.[7][8][9] The authors identified binding sites for individual transcription factors in the budding yeast Saccharomyces cerevisiae. In 2002, Richard Young’s group [10] determined the genome-wide positions of 106 transcription factors using a c-Myc tagging system in yeast. Other applications for ChIP-on-chip include DNA replication, recombination, and chromatin structure. Since then, ChIP-on-chip has become a powerful tool in determining genome-wide maps of histone modifications and many more transcription factors. ChIP-on-chip in mammalian systems has been difficult due to the large and repetitive genomes. Thus, many studies in mammalian cells have focused on select promoter regions that are predicted to bind transcription factors and have not analyzed the entire genome. However, whole mammalian genome arrays have recently become commercially available from companies like Nimblegen. In the future, as ChIP-on-chip arrays become more and more advanced, high resolution whole genome maps of DNA-binding proteins and chromatin components for mammals will be analyzed in more detail.

Chip-Sequencing is a recently developed technology that still uses chromatin immunoprecipitation to crosslink the proteins of interest to the DNA but then instead of using a micro-array, it uses the more accurate, higher throughput method of sequencing to localize interaction points.

DamID is an alternative method that does not require antibodies.