Drake University is a private, co-educational university located in Des Moines, Iowa, USA. The institution offers a number of undergraduate and graduate programs, as well as professional programs in law and pharmacy. Today, Drake is one of the twenty-five oldest law schools in the country. Distinguished alumni include Dwight D. Opperman, former CEO of West Publishing Company, after whom Drake's law library was named; Neal Smith, who served in the United States House of Representatives from 1959 until 1995. The University approved a new Master building plan on June 25, 2005, calling for extensive renovations of existing facilities and the construction of several large buildings, including a new first year student residence hall, science building, fine arts building, and multi-purpose learning center.

The institution was founded in 1881, when most of the staff of Oskaloosa College left that college to establish what would become Drake University, founded by Francis Marion Drake, a resident of Centerville, Iowa and Governor of Iowa (1896–1898). From its founding in 1881, Drake University maintained affiliation with the Christian Church (Disciples of Christ) although no religious affiliation is officially recognized today.

The university's law school, the oldest law school in the country west of the Mississippi River, was established in 1865 by Chester C. Cole [1], who served on the Iowa Supreme Court from 1864 to 1876. In 1969 Drake's basketball team went to the Final Four under coach Maurice John, but were defeated by the UCLA Bruins by three points. Drake did defeat the University of North Carolina by 20 points in the third place game.

On September 17, 1969 the Drake student newspaper, The Times-Delphic[2], published what appears to be the first documented account of the famous Paul is dead hoax, written by Tim Harper. No articles published prior to this piece about the supposed death of Paul McCartney are known, although fellow Times-Delphic reporter and musician Dartanyan Brown, one of the sources for the article, recalled hearing about the hoax from other musicians and reading about it in some underground newspapers.

"Institutions of learning must come under this rule: By their fruits ye shall know them. A practical education is that which gives the mind the most power and adaptability. The credentials that your young and hopeful alma mater will soon confer upon each of you can only give you an introduction to the world of letters and of actual life. They can serve you no further. In whatever of the varied vocations of life you may engage, as well as in general society, you must work out your own destiny." - Drake Founder George Carpenter at Drake University's third commencement in 1884

The University is made up of the following colleges:

More than 3,500 full-time undergraduate students from 50 states and 56 countries. (Total for university)

270 full, associate and assistant professors and instructors. 94 percent hold the highest degree in their fields. (Total for university)

Accrediting Council on Education in Journalism and Mass Communication. Drake is among 109 accredited programs nationwide. To win accreditation, schools meet 12 standards, which address such issues as class size to diversity within the faculty and curriculum. Accreditation reviews occur every six years. Drake's program has been continuously accredited, most recently in 2010.

Almost 95 percent (94.9) of 2006 Drake journalism graduates reported being employed in the field or in graduate school, according to a recent survey by the university. Of these, 89.5percent reported having had an internship while in school.

The SJMC's magazine program has achieved national prominence. The Accrediting Council on Education in Journalism and Mass Communication (ACEJMC) team that visited in 1999 called the SJMC a “real standout” and termed Drake's Magazines program the strongest undergraduate sequence in the country. Drake student magazines THiNK and 515 won 2007 Pacemaker awards in Washington, D.C.

The School of Journalism and Mass Communication is also home to 94.1 The Dog, which operates under the call letters KDRA-LP FM. The station launched in August 2006 after having existed as an internet station, KDCS Bulldog Radio. 94.1 The Dog is broadcast at 80 watts from a tower atop Meredith Hall, the home of Drake's SJMC. An agreement with the Federal Communications Commission (FCC) allows Drake to utilize the frequency from 4 p.m. to 4 a.m. weekdays and all day Saturday, while Grand View University controls the frequency the rest of the week under the call letters KGVC-LP. Drake students schedule 24 hours of programming under "The Dog," broadcasting online and on channel 12 on closed-circuit television on campus even when not broadcasting on the frequency. 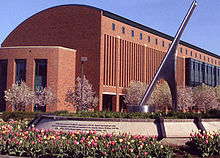 Drake's law school is one of the twenty-five oldest law schools in the nation, tracing its history to 1865. It is a charter member of the Association of American Law Schools, has been accredited since 1923 when accreditation first began, and is one of only seventy-five ABA-approved law schools to have a Chapter of Order of the Coif. Drake University Law School is home to the American Judicature Society, the archives of the National Bar Association, the nation's oldest and largest national association of predominately African-American lawyers and judges, and the Drake Constitutional Law Center, which is one of only four constitutional law programs established by the U.S. Congress and funded by the federal government. The Center's mission is to foster in-depth study of the United States Constitution. A significant aspect of the Center's activities is the Dwight D. Opperman Lecture series, an annual event of national importance in constitutional law. Several Supreme Court Justices have visited campus to deliver lectures on American jurisprudence. Numerous current and former United States Supreme Court Justices have delivered the Opperman Lecture, including Justice Clarence Thomas, Justice Antonin Scalia, Justice Ruth Bader Ginsburg, Justice Stephen Breyer, Justice Sandra Day O'Connor, Justice Anthony M. Kennedy, Justice Samuel Alito, Chief Justice John G. Roberts, and late Justices Harry A. Blackmun, Lewis F. Powell and William H. Rehnquist. The 2007 graduate schools edition of U.S. News ranks the law school as Tier 3.

College of Pharmacy and Health Sciences

The 2008 edition of U.S. News and World Report best graduate programs ranks Drake's College of Pharmacy the #51 of all fully accredited pharmacy schools meeting the in the United States (tying for 5th among private institutions).[2] In 2005, Former Walgreens Chairman and CEO Dan Jorndt, donated $10 million to his alma mater.
Majors offered: Doctor of Pharmacy (PharmD.), Bachelor of Science in Pharmaceutical sciences (BSPS), and Bachelor of Science in Health Sciences (BSHS).

Students are required to live on campus for their first two years at Drake. This excludes non-traditional students who take time off between high school and matriculation. Most students choose to live off campus during their final two years.

Drake West Village is not a residence hall and is not owned by Drake University. This also applies to the Old Main apartments.

Drake University and Hubbell Realty leaders announced plans on July 20, 2006 for a $34-million housing and retail development at 30th Street and Carpenter Avenue. The development will create 7,000 feet of retail space for street-level neighborhood businesses and upper floors for state-of-the-art student suites. The buildings will house up to 500 students. Current design calls for a mix of one-, two- and four-bedroom units, where each student has a private bedroom and shares a common living and kitchen space. The housing will be targeted primarily at junior and senior undergraduate students and graduate students in the pharmacy program or the Drake Law School.

Drake features over 160 student organizations in which to participate, which include: 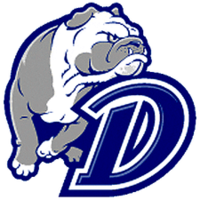 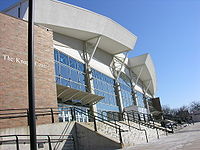 The Knapp Center is a 7,002 seat multi-purpose arena at Drake. Its main purpose is to host Drake athletic events, but is also used for, among other things, concerts, Bucksbaum Lectures, and commencement. It was built in 1992, and is the home of the Drake Bulldogs. Prior to the Knapp Center, Drake's basketball teams played their games at Veterans Memorial Auditorium in downtown Des Moines. Other sports previously used the fieldhouse which is about a block west of the Knapp Center. The first Drake basketball game in the Knapp Center was played on December 5, 1992.

Drake University also hosts the Drake Relays during April. This track and field event has been held since 1910, and is the second-largest collegiate track and field event in the United States. Participants come from all over the world to compete in this three-day event, which also helps to draw large crowds of spectators to Des Moines. Many Olympic athletes can be found participating in these events, which commonly break national and world records. Des Moines police units are in heavy presence for the event, though most students claim many of the city's laws and ordinances, especially those regarding underage alcohol cosumption, are suspended for the event.

Students kick-off the Relays in the annual tradition of Street Painting, in which student organizations colorfully decorate areas of Carpenter Avenue near the center of campus under a common theme. The theme in 2007 was "The Legacy Lives On"—referencing the $15 million renovation of Drake Stadium. Other themes have included 2009's "Running Strong a Century Long", in honor of the 100th running of the Relays, and 2010's "History to you, Tradition to us". The theme for 2011 is "Come for the race, stay for the [blank]".Streaking the street painting was an annual occurrence for a period in the mid-1990s and has occasionally occurred in a few years following.

The fight song for Drake University is The "D" Song. The lyrics are:

Drake University advanced to seventh in the "Great Schools, Great Prices" rankings and gained sole possession of third place in the overall rankings of 142 Midwest Universities - Master's category published by U.S. News and World Report magazine in the 2010 edition of "America's Best Colleges."

Last year Drake ranked eighth in the "Great Schools, Great Prices" category. The rankings are based on a formula that relates a school's academic quality, as indicated by its U.S. News ranking, to the net cost of attendance for a student who receives the average level of need-based financial aid. "The higher the quality of the program and the lower the cost, the better the deal," according to the magazine.

Drake continues to be ranked No. 2 in reputation for academic quality (peer assessment). It has the highest ranking in its category of any Iowa college or university in the U.S. News Master's category. Drake improved in several areas this year, including student/faculty ratio, average freshmen retention rate and freshmen in the top 25 percent of their high school class.[3]