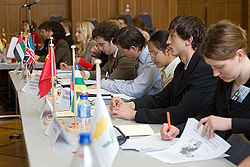 A Model United Nations Conference in Stuttgart, Germany in action.

The participants role-play as diplomats representing a nation or NGO in a simulated session of an organ (committee) of the United Nations, such as the Security Council or the General Assembly. Participants research a country, take on roles as diplomats, investigate international issues, debate, deliberate, consult, and then develop solutions to world problems. More recently, simulation of other deliberative bodies, such as the United States National Security Council, has been included in Model United Nations, even if they are completely unrelated to the UN or international affairs as a whole. 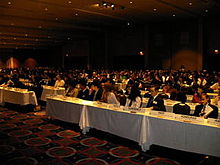 During a conference, participants must employ a variety of communication and critical thinking skills in order to represent the policies of their country. These skills include public speaking, group communication, research, policy analysis, active listening, negotiating, conflict resolution, note taking, and technical writing. However, school delegation formats vary from region to region.

Most Model UNs are simulations of a body in the United Nations system, such as:

Many conferences simulate other IGOs including: 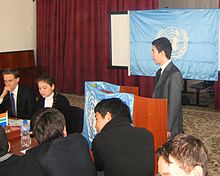 In addition, solely national organizations such as the United States National Security Council are often role played, with delegates role-playing specific people (e.g. the Secretary of State or the Secretary of Defense) rather than representing countries. This may be taken one step further, having the delegate represent merely the interests of his or her office, or role-play a specific holder of the office (e.g. Hillary Clinton). Such committees are typically "crisis committees;" that is to say, they do not begin with a fixed topic but rather are forced to deal with issues as they come up. A team of conference organizers (known as a crisis staff) develops a simulated event which acts as a catalyst for a crisis. The staff continually inform the committees of changing events on the ground, to which the committee must respond; in addition, individual delegates are typically allowed to take certain actions on their own, without committee approval, subject to the interpretation and agreement of the crisis staff. However, the correspondence between single-country and crisis committees are not perfect; for instance, the UN Security Council and some NATO bodies are typically run as crisis committees, and some national cabinets are fixed-topic committees.

More unusual committees abound at the collegiate level; for instance, a college conference may simulate the Greco-Persian Wars via a committee of the Greek poleis,[1] have a committee simulating the National Football League's annual owners meeting, as held at George Mason University MUN in 2009, or even have a committee simulating President David Palmer's cabinet from the TV show 24, simulated by the University of Pennsylvania Model UN Conference in 2007.[2]

Many conferences also run crisis simulations in which hypothetical real world factors are included in the simulation, including representatives from various groups such as member states thattopics for a crisis which can span all the committees of the conference.

Model UNs are often run using basic parliamentary procedure. This allows all delegates to be active participants. Common activities in MUN involve giving speeches to the committee and writing resolutions concerning a given topic. Additionally, at the end of longer conferences, awards are commonly given to either individual delegates, delegations, or both. The judging of this varies. For example, American conferences on the West Coast, such as BMUN, give delegates points for every action they perform, which are added. At the end of the conference, awards are given to the highest point scorer. On the other hand, conferences on the East Coast such as the Harvard National Model United Nations, delegates are judged in a more holistic manner, but perhaps to the detriment of objectivity and transparency. Giving awards is less common at smaller conferences. In addition, many larger conferences do not give awards at all, feeling that competition detracts from the simulation experience. Model U.N Conferences are also held in countries like India where the scope and participation has expanded.

In the early days of Model United Nations, participants were mostly students at select colleges in the United States of America. Today, Model United Nations has greatly matured and expanded. It is now practiced all over the world in classes, clubs, and conferences. Model United Nation participants are elementary, secondary, undergraduate, graduate and doctoral students. Recently even university alumni and professionals have taken part. Participants come from public and private schools and universities, and they live in city, suburban and rural areas.

Some simulations are small, including members of only a single class. For example, 20 students can do a one-hour simulation of the (15-member) United Nations Security Council in their classroom. Other simulations can be very large, involving many committees and taking place over the span of several days. The majority of conferences generally involve anywhere from 50 to several hundred delegates, with most students living around that one region. The largest conferences can have thousands of participants from many different countries. Each simulation and conference varies greatly in number of participants and their involvement.

The concept of Model United Nations has grown substantially all across the world, with various third-world and traditionally non-English speaking nations joining in. One example of this is Pakistan where a number of universities have a Model UN program.

The Dominican Republic is the only country to have incorporated the concept of Model UN into its official high-school curriculum. This is in large part due to the efforts of the United Nations Association of the Dominican Republic, which has harbored substantial support from the government despite being completely apolitical.

A position paper (sometimes known as a Policy Statement) is an essay that is written by participants of some models. It describes the detailed position of a certain country on a topic or issue that the writer will debate in his or her committee. Position papers are not always required, but certain conferences mandate that each delegate send his own before the opening. It is also known as the (Foreign) Policy Statement or (F)PS.[6]

Conferences have different format and styles for position papers. Nevertheless, UNA-USA established a format that has been adopted widely throughout the Model UN community. However, in Latin America the alternative TINK format, developed by of Argentina, is used. in Either way, most position papers consist of a heading with committee, topic, country and delegate information and body which explains in detail the position of the author's country. The position paper usually includes several pages outlining:

Position papers should explain an issue from their country's point of view. It is also good practice that they include statistics about the issue that would support the cause they defend. The paper would also try to convince the other countries of the committee to their view of the issue. It would have ways to solve the situation.[7]

Many conferences require delegates to submit a copy of their position paper, as a means to ensure that the delegates research important topics and construct strong and well-informed positions on those subjects, yet presentation is still a valuable component.

Additionally, the National Model United Nations Conference held in New York City is the most revered conference for the Organization. During this conference, delegates in the General Assembly Plenary committees vote on their legislation inside the UN Headquarters in New York, which is intended to give conference participants a real-life feel for how policies are voted on within the United Nations system.

In Europe there are many MUN conferences organized at different level. One of the biggest ones (in terms of participants) is the Rome Model United Nations, held each March in Rome for college-level students (www.romemun.org)

Model UN is supported by many organizations, private groups, non-governmental organizations, inter-governmental organizations and national governments. United Nations Associations around the world and its international organization the World Federation of United Nations Associations (WFUNA) have supported MUNs for decades. WFUNA organized the first collegiate MUN in China and works with MUNs all over the world. In the USA the main support is given by UNA-USA's Global Classrooms program.[10] Global Classrooms offers professional development workshops for educators and four curricula on peacekeeping, human rights, sustainable development, and the Economics of Globalization. UNA-Dominican Republic introduced MUN to the DR and now it is a part of the national education curriculum. In Europe the main support is from THIMUN, which has affiliate conferences throughout Europe and around the world. MUN International has just created a new global membership association to help "expand and increase MUN activities", the MUN International Network and has aided conferences in Asia, Latin America, the Caribbean, Europe, Africa and the US. Rotary International chapters around the world support many MUNs, e.g. the first international MUN in Hong Kong was organized and funded by three local Rotary Chapters.

The Organization of American States has been involved from the very beginning in the support to international civic simulations. North Atlantic Treaty Organization annually supports the Model NATO conference in Washington, DC, USA, with speakers, consultations and advisers. Other IGOs provide research assistance to simulations, conferences and students. Additionally, many UN Missions and Embassies support Model United Nations activities. Many mission and embassy websites have recently added sections created specifically for Model United Nations. Embassies and Consulates will often invite groups to discuss country positions or send a speaker out to speak to Model United Nations clubs, classes, or conferences. The overall support of simulation education activities by the international community is increasing rapidly every year.

Additionally, national governments support or sponsor MUN programs. The US Department of State has been working in Washington, DC public schools for over 15 years as well as providing speakers to MUN conferences around the world. In the Dominican Republic MUN is part of the national education curriculum. Embassies and UN Missions around the world have been providing consultation, speakers, research documents for over 40 years. Many have even reviewed student's MUN resolutions for policy accuracy.