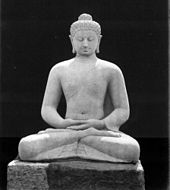 Gandhāran Mahīśāsakas are associated with the Pure Land teachings of Amitābha

Mahīśāsaka (Sanskrit; traditional Chinese: 化地部; pinyin: huàdì-bù) is one of the early Buddhist schools according to some records. Its origins may go back to the dispute in the Second Buddhist Council. The Dharmaguptaka sect is thought to have branched out from Mahīśāsaka sect toward the end of the 2nd or the beginning of the 1st century BCE.

The Mahīśāsaka sect is thought to have first originated in the Avanti region of India.[3] Their founder was a monk named Purāṇa, who is venerated at length in the Mahīśāsaka vinaya, which is preserved in the Chinese Buddhist canon.[4]

From the writings of Xuanzang, the Mahīśāsaka are known to have been active in Kashmir in the 4th century CE. Xuanzang records that Asaṅga, an important Yogācāra master and the elder brother of Vasubandhu, received ordination into the Mahīśāsaka sect.[5]

Between 148 and 170 CE, the Parthian monk An Shigao came to China and translated a work which describes the color of monastic robes (Skt. kāṣāya) utitized in five major Indian Buddhist sects, called Dà Bǐqiū Sānqiān Wēiyí (Ch. 大比丘三千威儀).[7] Another text translated at a later date, the Śariputraparipṛcchā, contains a very similar passage corroborating this information.[8] In both sources, members of the Mahīśāsaka sect are described as wearing blue robes.[9] The relevant portion of the Mahāsāṃghika Śariputraparipṛcchā reads, "The Mahīśāsaka school practice dhyāna, and penetrate deeply. They wear blue robes."[10]

According to the Mahīśāsakas, the Four Noble Truths were to be meditated on simultaneously.[11] The earlier Mahīśāsakas appear to have not held the doctrine of an intermediate state between death and rebirth, but later Mahīśāsakas accepted this doctrine.[12]

It is believed that the Mahāyāna Longer Sukhāvatīvyūha Sūtra was compiled in the age of the Kuṣāṇa Dynasty, in the 1st and 2nd centuries CE, by an order of Mahīśāsaka bhikṣus, which flourished in the Gandhāra region.[13][14] It is likely that the longer Sukhāvatīvyūha owed greatly to the Lokottaravāda sect as well for its compilation, and in this sūtra there are many elements in common with the Mahāvastu.[15] The earliest of these translations show traces of having been translated from the Gāndhārī language, a prakrit used in the Northwest.[16] It is also known that manuscripts in the Kharoṣṭhī script existed in China during this period.[17]

The Mahīśāsaka sect believed that it was not possible for women to become buddhas.[21] In the Nāgadatta Sūtra, the Mahīśāsaka view is criticized in a narrative about a bhikṣuṇī named Nāgadatta. Here, the demon Māra takes the form of her father, and tries to convince her to work toward the lower stage of an arhat, rather than that of a fully enlightened buddha (Skt. samyaksaṃbuddha).[22]

Māra therefore took the disguise of Nāgadatta's father and said thus to Nāgadatta: "Your thought is too serious. Buddhahood is too difficult to attain. It takes a hundred thousand nayutas of kotis of kalpas to become a Buddha. Since few people attain Buddhahood in this world, why don't you attain Arhatship? For the experience of Arhatship is the same as that of nirvāṇa; moreover, it is easy to attain Arhatship...."

In her reply, Nāgadatta rejects arhatship as a lower path, saying, "A Buddha's wisdom is like empty space of the ten quarters, which can enlighten innumerable people. But an Arhat's wisdom is inferior."[23]

The Mahīśāsaka sect held that there were five obstacles that were laid before women. These are that they may not become a cakravartin king, mara king, sakra king, brahma king, or a buddha. This Mahīśāsaka view is ascribed to Māra in the Nāgadatta Sūtra of the Sarvāstivādins:[24]

Māra said, "I have not even heard that a woman can be reborn as a cakravartin; how can you be reborn as a Buddha? It takes too long to attain Buddhahood, why not seek for Arhatship and attain nirvāṇa soon?" Nāgadatta replied, "I also have heard that a woman cannot be reborn as a cakravartin, a Sakra, a Brahma, and a Buddha, and yet I shell make the right effort to transform a woman's body into a man's. For I have heard that those Noble Ones, by the practice of bodhisattvacarya for a hundred thousand nayutas of kotis of kalpas diligently attain Buddhahood."

The Mahīśāsakas believed that women essentially could not change the nature of their minds or physical bodies, and would cause the teachings of Buddhism to decline.[25] Of this, David Kalupahana writes, "The Mahīśāsaka prejudice against women is based upon the traditional view of women. Like some of the other early Buddhist practitioners, they did not trust women, even nuns. This explains why they restricted nuns' social and religious activities in the sangha. Sometimes they liken the nuns' existence to hail which damages a good harvest."[26]