Columbia Business School is known for its close ties to Wall Street and the seminal work completed in the field of Finance by professors Benjamin Graham and David Dodd. It is affiliated with 13 winners of the Nobel Prize in Economics including current professors Robert Mundell, Joseph Stiglitz and Edmund Phelps.[3] The school has an international emphasis, and many alumni have achieved distinction in the public as well as the private sector.

Logo introduced in the 1950s

A. Barton Hepburn, then president of Chase Manhattan Bank, founded the School in 1916 with 11 full-time faculty members and an opening class of 61 students, including 8 women. The School expanded rapidly, enrolling 420 students by 1920 and in 1924, added a PhD program to the existing BS and MS degree programs.[4]

In 1945, Columbia Business School authorized the awarding of the MBA degree. Shortly thereafter, in the 1950s, the School adopted the Hermes emblem as its symbol, reflecting the entrepreneurial nature of the Greek god Hermes and his association with business, commerce and communication.[5]

Logo introduced in the 1990s

On July 1, 2004, R. Glenn Hubbard became Columbia Business School's eleventh dean. Hubbard, the former chair of President Bush's Council of Economic Advisers, has worked at the intersection of the private, government and nonprofit sectors and played an active role in shaping national and international economic policy, including the deregulation policy leading up Wall Street bank failures in 2008. In Charles Ferguson's 2010 documentary, Inside Job, when prompted, Hubbard strongly maintains that his political and financial connections to government and Wall Street firms do not create any potential academic conflict of interest. 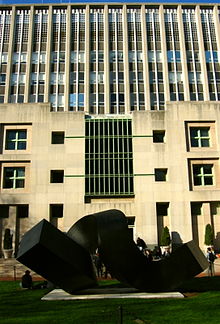 Today, Columbia Business School is primarily housed in Uris Hall, a recently renovated 1960s structure at the center of Columbia's Morningside Heights campus. An auxiliary space, Warren Hall, is situated on Amsterdam Avenue and is shared with the law school. By 2015, the school will be moved to a new, more spacious facility at Columbia's planned new campus on 125th Street in Manhattanville.[6] 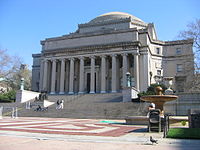 In October 2010, Columbia Business School announced that alumnus Henry Kravis, the billionaire co-founder of private-equity firm Kohlberg Kravis Roberts (KKR & Co.), pledged $100 million to fund expansion of Columbia Business School, the largest gift in its history. The donation will go toward construction of the business school’s new site in the Manhattanville section of New York City, where Columbia University is extending its campus. One of the school’s two new buildings will be named for Kravis.[7] The buildings will be designed by Diller Scofidio + Renfro.[8]

The Columbia MBA Program is designed to prepare its students for the challenges they will face as emerging leaders in a rapidly changing business world. The admission process is highly competitive with an admission rate of 15% in 2009.[9] The student body is highly accomplished and diverse. Students in the class that entered in 2009 come from 61 countries and speak more than 50 languages.[10]

The revised core curriculum, launched in the fall of 2008, represents about 40% of the degree requirement.[11] It consists of 2 full courses and 12 half-term courses including Corporate Finance, Financial Accounting, Managerial Statistics, Managerial Economics, Leadership, Operations Management, and Marketing Strategy.[12] While the first year of the program is usually devoted to completing the requirements of the core curriculum, the second year provides students with the opportunity to choose from the more than 130 elective courses available at the School and supplement them with more than 4,000 graduate-level classes from the University's other graduate and professional schools.[13] Among the most popular electives at Columbia Business School are the Economics of Strategic Behavior, Financial Statement Analysis and Earnings Quality, Launching New Ventures, Modern Political Economy, and the Seminar in Value Investing.[13]

Columbia Business School has a firm grade non-disclosure policy, stating that students refrain from disclosing specific class grades, GPAs, or transcripts until they accept full-time, post graduation positions.[14] Students enter Columbia's MBA program in two tracks. The traditional fall term is approximately 550 students, while the January term "J-Term" is approximately 200 students. Students entering in the fall are divided into eight clusters of approximately 65 students that take all first year core classes together. J-Term students are broken into three clusters. The J-Term is aimed at students who want an accelerated 18 month program who usually plan to return to their previous job, are company sponsored, and will not pursue a summer internship because they take classes during the summer.

The recently launched Columbia CaseWorks program utilizes the faculty’s research and industry experience and brings that perspective into the classroom through the development of new cases and teaching materials.[15] Beginning in orientation and continuing through core classes and electives, students are immersed in cases that use faculty research to address real-world business issues. Columbia CaseWorks challenges students to debate corporate decision making and to develop appropriate recommendations and solutions. During their first year, students study and discuss an integrated case that focuses on a single company and is incorporated into several core courses. This encourages students to think about a company holistically, analyzing it from the perspective of various disciplines.[16]

In 2009, the median starting base salary was $100,000 with a median $20,000 signing bonus and a median $24,000 of other guaranteed compensation.[17] According to Forbes magazine, 90% of billionaires with MBAs who derived their fortunes from finance obtained their master's degree from one of three schools: Harvard Business School, Columbia Business School, or The Wharton School at the University of Pennsylvania.[18]

Many students choose to focus on a particular area in order to gain deeper knowledge in a specific discipline. Columbia Business School offers the following areas of focus:[19]

Held each year on the first Monday in May, the Annual Dinner is a highlight of the Columbia Business School calendar and brings together more than 1,000 business leaders, faculty members, students, alumni and friends for an evening of support for the School's many programs and initiatives.[40] The event provides critical resources for curriculum development, student financial aid, faculty research and the day-to-day operations of the School.

The Columbia Business School Follies is a student club that works throughout each semester to put together a production in which students write, choreograph, and perform comedy skits. It achieved notoriety in 2006[42][43][44] for Every Breath Bernanke Takes, its video parody of the Police song "Every Breath You Take". It purports to be from Glenn Hubbard, Dean of the Business School, in response to Hubbard's being a runner-up to the Fed Chairmanship assumed by Ben Bernanke. In 2008, the Follies team released a sequel to this video called[45] The Market Crashed On Me, a parody of the Boyz II Men song "On Bended Knee". The Follies' other notable video parodies include Damn It Feels Good To Be A Banka, B-School Guy vs. Law School Guy, Baby Got WACC, and MRS.

The Executive MBA (EMBA) Friday/Saturday Program is a 20-month graduate program designed for individuals that are looking to enhance their education without interrupting their careers. The EMBA program is taught on campus at Columbia University by full-time faculty. The first year of classes consists of the same core curriculum as the Full-Time MBA program. Executive education is the focus of the second year. This Friday/Saturday program is targeted at individuals with approximately 10 years of work experience.[46]

The Executive MBA (EMBA) Saturday Program is a 24 month graduate degree program designed for individuals that are looking to enhance their education, but cannot take any time away from work. This program is the same as the Friday/Saturday program, with the exception that classes only meet on Saturdays over a longer period of time.

In addition to the New York–based EMBA Program, Columbia offers three partner programs to meet the differing needs and geographical distribution of prospective students.[47] Because students in the partner EMBA programs must satisfy the separate requirements of each school, they earn an MBA degree from each participating university. Likewise, they become alumni of each university and business school and may avail themselves of all programs and privileges afforded to alumni.

The degree of Doctor of Philosophy (PhD) is offered by the Graduate School of Arts and Sciences and is administered by the Business School. Admission is highly competitive with 894 applicants in 2010 for positions in an entering class of 18 students (2%).[54] A PhD in Management or Business is a common precursor to an academic career in business schools.

Throughout the program, students become familiar with research methods and the literature of their major fields through research projects and directed reading.[55] Doctoral candidates begin the program mastering basic research tools by studying subjects such as economics, behavioral science and quantitative methods, in addition to completing course work and examinations in the major field of study. The completion of course work and qualifying examinations normally requires two to three years.

The research phase begins as early as the first year, when students serve as research assistants, and continues throughout their time at the School.[55] Students gradually become more involved in the design and execution of research and, by the end of the second year, have typically produced at least one paper suitable for publication, often as coauthor with a faculty member. The later years of the program are dedicated to original research and the creation of the dissertation.

The School's faculty are divided into five academic units:[60]

] teaches Investment Banking and is the CEO of a boutique investment bank by the same name. Frederic Mishkin, member of the Board of Governors of the Federal Reserve System, returned to teach at CBS starting fall 2008.[63] 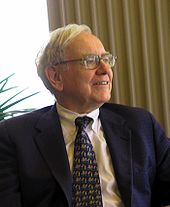 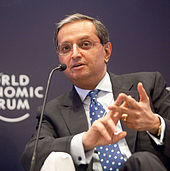