Minoru Yamasaki (山崎 實, Yamasaki Minoru?, December 1, 1912 – February 7, 1986) was a Japanese-American architect, best known for his design of the twin towers of the World Trade Center, buildings 1 and 2.[1] Yamasaki was one of the most prominent architects of the 20th century. He and fellow architect Edward Durell Stone are generally considered to be the two master practitioners of "New Formalism."[2] 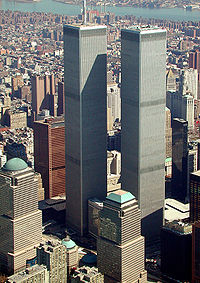 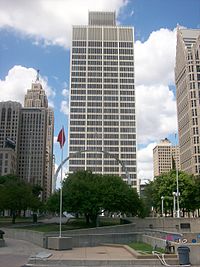 One Woodward Avenue in Detroit 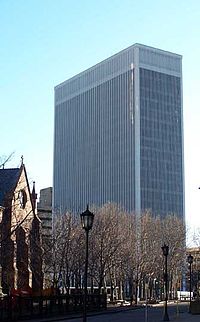 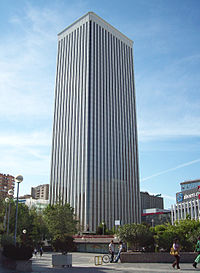 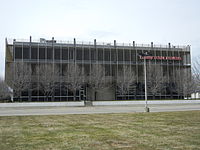 The Conservatory of Music at Oberlin College, designed by Yamasaki in 1963. The distinctive style is similar to Yamasaki's design of the World Trade Center.

Yamasaki was born in Seattle, Washington, a second-generation Japanese American, son of John Tsunejiro Yamasaki and Hana Yamasaki.[3] He grew up in Auburn, Washington and attended Auburn Senior High School.[4] He enrolled in the University of Washington program in architecture in 1929, and graduated with a Bachelor of Architecture (B.Arch.) in 1934.[5] During his college years, he was strongly encouraged by faculty member Lionel Pries. He earned money to pay for his tuition by working at an Alaskan salmon cannery.[6]

After moving to New York City in the 1930s, he enrolled at New York University for a master's degree in architecture and got a job with the architecture firm Shreve, Lamb and Harmon, designers of the Empire State Building. In 1945, Yamasaki moved to Detroit, where he was hired by Smith, Hinchman, and Grylls.[7] The firm helped Yamasaki avoid internment as a Japanese-American during World War II, and he himself sheltered his parents in New York City.[8] Yamasaki left the firm in 1949, and started his own partnership.[7] One of the first projects he designed at his own firm was Ruhl's Bakery at 7 Mile Rd. and Monica St.[9] In 1964 Yamasaki received a D.F.A. from Bates College.

His first significant project was the Pruitt–Igoe housing project in St. Louis, Missouri, 1955. Despite his love of Japanese traditional design, this was a stark, modernist concrete structure. The housing project experienced so many problems that it was demolished in 1972, less than twenty years after its completion. Its destruction is considered by some to be the beginning of postmodern architecture. [11]

He also designed several "sleek" international airport buildings and was responsible for the innovative design of the 1,360 foot (415 m) towers of the World Trade Center, for which design began in 1965, and construction in 1972. Many of his buildings feature superficial details inspired by the pointed arches of Gothic architecture, and make use of extremely narrow vertical windows. This narrow-windowed style arose from his own personal fear of heights.[12]

Yamasaki was an original member of the Pennsylvania Avenue Commission, which was tasked with restoring the grand avenue in Washington, D.C., but resigned after disagreements and disillusionment with the design by committee approach.[13]

After teaming up with Emery Roth and Sons on the design of the World Trade Center, they teamed up again on other projects including new defense buildings at Bolling Air Force Base in Washington, D.C.[14]