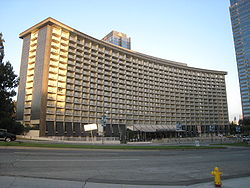 The Hyatt Regency Century Plaza Hotel in Los Angeles is a landmark 19-story luxury hotel forming a sweeping crescent design fronting the spectacular fountains on Avenue of the Stars adjacent to the twin Century Plaza Towers and the CAA building. 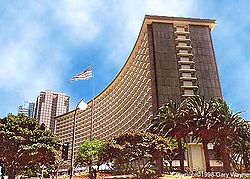 1990s postcard of the Century Plaza Hotel, showing the now demolished tower wing behind it.

The Century Plaza Hotel opened its doors on June 1, 1966 in the Los Angeles district of Century City on a former backlot of 20th Century Fox Studios. Fox still has its backlot in the district as well as its headquarters, Fox Plaza. Century City, known as the City of the Century (20th), was dominated for much of its early history by the Century Plaza Hotel, as it was the highest building on the hill, where the Presidential Suite looked all the way to the Pacific Ocean.

In 1961, developer William Zeckendorf and Alcoa bought about 180 acres (0.73 km2) from 20th Century Fox after the studio had suffered a string of expensive flops, culminating in the box-office disaster Cleopatra. The new owners conceived Century City as "a city within a city" with the arc-shaped, 19-story, 726-room Minoru Yamasaki-designed Century Plaza as the centerpiece of the new city.[1]

When the Century Plaza began operating in 1966, its doormen wore red Beefeater costumes. The hotel's ballrooms became the center for numerous high-profile events, including an opening charity gala in 1966 emceed by Bob Hope, who with singer Andy Williams entertained the likes of Ronald and Nancy Reagan and Walt and Lillian Disney. In 1967, 1300 club-swinging police clashed with about 10,000 Vietnam War demonstrators as President Johnson spoke at a Democratic fundraiser at the hotel.

The Tower at Century Plaza

In 1984, the hotel added a 297-room tower on the north portion of the property, adjacent to Olympic Boulevard. The Tower was marketed as a luxury wing of the hotel and increased capacity to 1046 rooms. Ronald Reagan by arrangement signed in as the first guest of the just completed Tower, while then Century Plaza Vice-President and Managing Director William Quinn greeted him on December 27, 1984. In 1999 the hotel rededicated its penthouse suite, the entire 32nd floor the Ronald Reagan Suite, attendees including Nancy Reagan. While Reagan was in office, he stayed in the Tower so frequently the media dubbed it his Western White House. President Reagan had recently celebrated his re-election to a second term as President on the stage of the Los Angeles Ballroom in the original Century Plaza Hotel on November 6, 1984. In 2000, soon after Westin was acquired by Starwood, the Tower was converted into a separate hotel under a more luxurious Starwood brand, The St. Regis Los Angeles. That hotel was then sold by the owners of the Century Plaza in 2005 to developers who closed it for conversion to residential use. With its 1980s ceilings too low to meet modern residential demands, the relatively new building was razed to make way for The Century, a high-rise condominium completed in fall 2009.[1]

The Century Plaza has played host to various celebrities, foreign dignitaries, and Presidents. Among them, Marshal Josip Broz Tito, Moshe Dayan, Prince Phillip, and David Ben-Gurion. The hotel was the venue for the 1970 and 1971 Grammy Awards. It was also the venue for the 2009 and 2010 Visual Effects Society's prestigious annual awards ceremony.

For its entire history, the Century Plaza had been managed by Western International Hotel, which became Westin hotels. However, in 2006, the property was taken over by the Hyatt brand and is currently a Hyatt Regency. However, the hotel has an iconic value that surpasses whichever hotel chain is managing the property, and the sign above the main entrance still reads Century Plaza Hotel.

On June 1, 2008, Next Century Associates bought the Century Plaza Hotel from Sunstone Hotel Investors Inc. for $366.5 million. The sale price of $505,000 per room is one of the highest-paid for a hotel in California. Sunstone bought the Century Plaza for $293 million in 2005 and then spent $22 million upgrading the guest rooms and common areas.[1]

On December 18, 2008, the new owners announced plans to demolish the hotel and build a pair of fifty-story towers in its place.[2] On April 28, 2009, The Century Plaza Hotel was added to The National Trust for Historic Preservation's list of the 11 most endangered historic places in America. In February 2010, the developer announced that it would renovate the hotel and convert some of the floors to condominiums, rather than demolishing and replacing the building as previously proposed.[3]