The Amiga CD32, styled "CD32" (code-named "Spellbound"), was the first 32-bit CD-ROM based video game console released in western Europe, Australia, Canada and Brazil. It was first announced at the Science Museum in London, United Kingdom on 16 July 1993, and was released in September of the same year. The CD32 is based on Commodore's Advanced Graphics Architecture chipset, and is of similar specification to the Amiga 1200 computer. Using 3rd-party devices, it is possible to upgrade the CD32 with keyboard, floppy drive, hard drive and mouse, turning it into a personal computer. A hardware MPEG decompression module for playing Video CD was also available. The CD32 managed to secure over 38% of the CD-ROM market in the UK [2].

The CD32 was released in Canada and was planned for release in the United States. However, a deadline was reached for Commodore to pay a patent royalty to Cad Track for their use of their XOR patent.[3] A federal judge ordered an injunction against Commodore preventing them from importing anything into the United States. Commodore had built up CD32 inventory in their Philippine manufacturing facility for the United States launch, but, being unable to sell the consoles, they remained in the Philippines until the debts owed to the owners of the facility were settled. Commodore declared bankruptcy shortly afterwards, and the CD32 was never officially sold in the United States.[3] However, imported models did come over the border from Canada, and many stores in the United States (primarily mail-order stores) imported units for domestic sale. During the long bankruptcy proceedings, Commodore UK also provided some hardware components and software for the American market, including production of the MPEG Video Module that was not officially released by Commodore International.

On its release, the CD32 was marketed by Commodore as 'the world's first 32-bit CD games console'. Although it was indeed the first such machine released in Europe and North America, the FM Towns Marty, a console released exclusively in Japan, beat it to market by seven months. However, the CD32's 68EC020 processor had a 32-bit data bus both internally and externally, while the 386SX in the FM Towns Marty has a 16-bit data bus externally.

Ultimately, Commodore was not able to meet demand for new units because of component supply problems. Sales of the CD32 in Europe were not enough to save Commodore, and the bankruptcy of Commodore International in April 1994 caused the CD32 to be discontinued only months after its debut.[4] During the brief Amiga CD32 presence in the market, approximately 100,000 units of it were sold in Europe alone.[1] 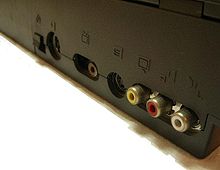 Ports located on the back of the Amiga CD32

The CD32 can be enhanced using these devices: ProModule, Paravision SX-1 and DCE SX-32 (which optionally includes 68030 CPU).

Those devices extend the capability of Amiga CD32, allowing it to utilize hardware such as an external 3.5" floppy disk drive, hard disk and IBM PC keyboard. An Amiga CD32 can be turned into a de facto Amiga 1200 via the addition of third-party packages. The SX-1 appears to have been designed around Commodore's mechanical specs and not the actual production units – it did not fit very well and requires an internal 'modification' to fit properly. Consequently, the SX-1 can be jarred loose if the console is not handled gently. The upgraded SX-32 expansion pack (which included a 68030 25 MHz processor) solves these problems.

Not wishing to repeat its earlier mistake of offering a way to turn a CD32 into an enhanced A1200 as it did with the A500-based CDTV, Commodore itself made no hardware available for that purpose. One of its last hardware designs, however, was an external CD-ROM drive for the A1200 that featured the CD32's Akiko chip, thus turning any A1200 into a CD32-compatible system.

In addition to its own special controllers, the Amiga CD32 is also compatible with most 9-pin D-Sub controllers from the 80s and 90s, including the SEGA Mega Drive/Genesis controllers, SEGA Master System controllers, and all Amiga/C64 joysticks as well as Amiga mice and paddles.

CDs created for the CD32 conform to ISO 9660 level2, mode1; although the Rock Ridge and Joliet extensions are not compatible.

If the system is turned on without a CD, a splash screen with scrolling colours will appear and a tune will play. After this tune ends, the user can press the blue button on the game pad to enter a language selection menu. The user can also press the red button to access a menu where they can view the contents of the internal Flash ROM. Unlike most game consoles, this menu does not allow the user to delete items. Instead, the system will automatically overwrite the oldest entries when memory runs out. The menu allows the user to "lock" files to prevent overwriting.

At launch, the CD32 was bundled with two games, Diggers, a new game from Millennium Interactive, and Oscar from Flair Software. A later pack included the one-on-one fighting game Dangerous Streets, a move by Commodore that was met with derision by the press. Many reviewers had given Dangerous Streets terrible scores (Amiga Power rating it just 3%) and were surprised that with a slew of powerful rival consoles about to hit the market, Commodore would choose to show off the abilities of its machine with a poor game.

The CD32 was capable of running most of the titles developed for the Amiga CDTV multimedia device (differences in CPU speed and Kickstart version prevented some of the earlier CDTV titles from running). Many of the games released for the CD32 were simply ports of games that were already available for Amiga computers. One benefit of this is that, when appropriate, many games retain the ability to use an Amiga mouse (in port 2) or Amiga keyboard (plugged into the AUX port).

Like all later Amiga computers, the CD32 has a hidden boot menu that can be accessed by plugging an Amiga mouse into port 2 and holding both buttons down while turning the system on. Most of the options in this menu are not useful on a CD32, but from this menu you can choose to boot in either NTSC or PAL mode. This is important, as there are some games that will refuse to work if the system is in the wrong mode, since most games don't advertise what video mode they were developed for. It should also be pointed out that despite the naming, the menu really only allows a choice of 60 Hz or 50 Hz video output; a PAL system booted in NTSC mode will still output a video signal using PAL color encoding, which will usually result in a black-and-white picture when connected to an NTSC television.

While the console was fairly successful during its lifespan and managed to be the best-selling CD format console in 1993, it was not able to sustain its growth, with Commodore filing for Chapter 11 just a year after its release after not being able to secure additional CD32 shipments for the holiday season. It was speculated that the holiday season could have kept Commodore afloat for another six months. Another problem was the lack of original games, which had also plagued the CDTV before it.

The CD32 arrived at a time when new, technically demanding genres such as the first person shooter were becoming popular. The console was not capable of handling some or all of these new types of genres (the hardware is far less powerful than Atari Jaguar or 3DO), games developers saw more profit in shovelware — taking an older game and either adding an FMV intro or even (in some cases) just directly transferring the floppy game onto CD. A few pieces of original software did appear and some were well received but by and large the CD32 found itself with a software library mainly containing titles that were up to five years old and which much of the machine's target audience already owned. Given that, along with the fact that 'hot' games like Doom and Virtua Fighter were planned for release on the CD32's competitors, many observers blamed shovelware for the machine's relative failure.

However, a large fan base carried over from the success of other Amiga computers, and several notable titles, such as Microcosm, Liberation: Captive 2, Simon the Sorcerer, Super Stardust and Zool 2 prevented the console from sliding into total obscurity.

In 1993, 109 CD32s were installed to run the interactive exhibits at the London Transport Museum, Covent Garden.[5] They provided information, animations, pictures, sound and text available in several languages, as well as a London Underground simulator. The systems were produced by the Odiham, Hampshire-based company Index Information, utilising their CD32x interface units.[6]

In 1995, an Italian company named CD Express used the CD32 as a basis for an arcade machine called "CUBO CD32".[7] Inside these machines, stock CD32s were hooked up to an external circuit board which essentially acted as a converter to route all the input and output into a standard JAMMA connector for use in an arcade cabinet. The software was provided on CD-ROM. Nine games are known to exist, all of which are original games created by CD Express.

In the mid to late 1990s, some vehicle registries in Canada utilized CD32 systems for interactive multimedia testing for drivers license applications.

In the late 1990s to early 2000s, slot machine manufacturer StarGames utilized a stripped down CD32 motherboard in many of their slot machines. Machines confirmed to be operating on CD32 hardware are Hawaiian Delight, Leprechaun Luck, and Mister Magic.