The PC-FX uses CD-ROMs as its storage medium, following on from the expansion released for its predecessor, which originally used HuCards. The game controller resembles that of the Mega Drive in shape, only with more buttons and it is virtually identical to a DUO-RX controller except for the fact that the rapid fire switches have been changed into mode A/B switches.

The PC-FX's computer-like design was unusual for consoles at the time. It stands upright like a tower computer while other contemporary consoles lay flat. Another interesting feature is its three expansion ports, as expansion ports are relatively underused in consoles and therefore their inclusion increased the price without offering a great deal to the end user. However it was one of the first consoles to feature an optional mouse which made strategy games like Farland Story FX and Power Dolls FX more accessible to play on TV.

Unlike nearly any other console (except for the 3DO), the PC-FX was also available as an internal PC card for NEC PC-98 and AT/IBM PC compatibles. This PC card came with two CDs of software to help the user program games for the PC-FX. However, compatibility issues prevented games developed with this software from actually running on the console.

The PC-FX was designed based on a new 32-bit development kit by NEC called "Iron Man". Iron Man was designed in 1992, while the PC Engine was still quite popular in Japan. It was around the time of the first running demonstration units in mid 1992 that NEC started discussing an imminent release of an Iron Man based system with its many third party developers. Many PC Engine developers seemed upset and uninterested since the PC Engine market was still growing, and as a result NEC halted work on the Iron Man and continued making modifications to the PC Engine. By 1993 the 32-bit 3DO platform was released with much developer interest and Sega and Sony let it be known that the Sega Saturn and PlayStation would be ready for the Japanese marketplace in late 1994, and Bandai was also readying the release of their Playdia system. Now in a rush to keep the large development base that made the PC Engine so successful, NEC had to make a decision. Rather than spending the time to develop a new, more powerful platform capable of standing up to their competitors, they decided to utilize the now dated 32-bit Iron Man architecture in the PC-FX. The result was that NEC wound up with a severely underpowered system that impressed neither developers nor consumers, failed to release the 3D expansion, and ultimately led to its demise.

The shining quality of the PC-FX however was the ability to decompress 30 JPEG pictures per second while playing digitally recorded audio (essentially a form of Motion JPEG). This resulted in the PC-FX having superior FMV quality over all other fifth generation consoles.

As the PC-FX struggled, NEC became far more liberal than most companies with regard to the titles that it allowed to be released for the platform in an attempt to get whatever development support they could. As a result, the PC-FX has gained quite a reputation for its abundance of gal games and dating simulation titles. It also had a handful of standard action games, RPGs, and strategy games.

There were 62 games released for the system. The launch titles were Graduation 2: Neo Generation FX, Battle Heat and Team Innocent on December 23, 1994 and the final game released was First Kiss Story on April 24, 1998. The system and all titles were only released in Japan. A number of demo discs were also released with publications which allowed the user to play the disc in a CD equipped PC-Engine or the PC-FX.

There was no copy protection on any of the PC-FX games, because at the time the system was released, the high price of CD-R burners and blank CDs made piracy expensive.

The PC-FX was discontinued in early 1998. At the time of the console's discontinuation, according to NEC the PC-FX had sold just under 100,000 units.[citation needed]

Below is a list of PC-FX emulators for various platforms. 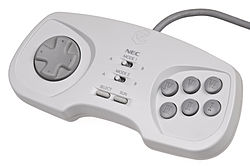