A game controller is a device used with games or entertainment systems used to control a playable character or object, or otherwise provide input in a computer game. A controller is typically connected to a game console or computer by means of a wire, cord or nowadays, by means of wireless connection. Controllers which have been classified as game controllers are keyboards, mice, game pads, joysticks, etc. Special purpose devices, such as steering wheels for driving games and light guns for shooting games, are also game controllers. Devices such as mice and keyboards can be emulated with a game pad through the use of programs such as 'JoyToKey'.

The main function of a game controller is to govern the movement/actions of a playable body/object or otherwise influence the events in a video or computer game. The type of controller used in a game depends on the genre of the game being played (i.e. Steering Wheel controllers for driving games, yoke like for flying, etc.).

A gamepad, also known as a joypad, is the most common kind of game controller. They are held in both hands with thumbs and fingers used to provide input. Gamepads can have a number of action buttons combined with one or more omnidirectional control sticks or buttons. Action buttons are generally handled with the digits on the right hand, and the directional input handled with the left. Gamepads are the primary means of input on nearly all modern video game consoles. Due to the ease of use and precision of gamepads, they have spread from their origin on traditional consoles to computers, where a variety of games and emulators support their input.

Most modern game controllers are a variation of a standard gamepad. Common additions include shoulder buttons placed along the edges of the pad, centrally placed buttons labeled start, select, and mode, and an internal motor to provide haptic feedback.

A paddle is a controller that features a round wheel and one or more fire buttons. The wheel is typically used to control movement of the player or of an object along one axis of the video screen. Paddle controllers were the first analog controllers and they lost popularity when "paddle and ball" type games fell out of favor. A variation on the Paddle, the Atari driving controller appeared on the Atari 2600. Designed specifically for the game Indy 500, it functioned almost identically in operation and design to the regular paddle controller. The exceptions were that its wheel can be continuously rotated in either direction, and it was missing the extra paddle included on the previous model. Unlike a spinner, friction prevented the wheel from gaining momentum.

A trackball is basically an upside-down mouse that is manipulated with the palm of one's hand. It has the advantage of not requiring a lot of desktop space, and that it is as fast as one can roll the ball on it. This is faster than one can move a mouse due to space not being an issue.

Notable uses of a Trackball as a gaming controller would be games such as Centipede, Marble Madness, Golden Tee and Sonic Arcade.

This joystick is a peripheral that consists of a handheld stick that can be tilted around either of two axes and (sometimes) twisted around a third. The joystick is often used for flight simulators. HOTAS controllers, composed of a joystick and throttle quadrant (see below) are a popular combination for flight simulation among its most fanatic devotees. Most joysticks are designed to be operated with the user's primary hand (e.g. with the right hand of a right-handed person), with the base either held in the opposite hand or mounted on a desk. 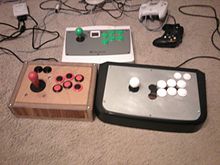 This device can also be a home version of the kind used in the arcade, or for use on emulators. It features a shaft that has a ball or drop-shaped handle, and one or more buttons for in game actions. Generally the layout has the joystick on the left, and the buttons on the right, although there are instances when this is reversed.

A throttle quadrant, as the name indicates, is a set of one or more levers that are most often used to simulate throttles or other similar controls in a real vehicle, particularly an aircraft. Throttle quadrants are most popular in conjunction with joysticks or yokes used in flight simulation.

The steering wheel, essentially a larger version of a paddle, is used in most racing arcade games as well as more recent racing simulators such as Live for Speed, Grand Prix Legends, GTR2, and Richard Burns Rally. While most arcade racing games have been using steering wheels since Speed Race in 1974,[1] the first steering wheels for home systems appeared on fifth-generation consoles such as the PlayStation and Nintendo 64.[citation needed]

Many are force feedback (see Force Feedback Wheel), designed to give the same feedback as would be experienced when driving a real car, but the realism of this depends on the game. They usually come with pedals to control the gas and brake. Shifting is taken care of with in various ways including paddle shifting systems, simple stick shifters which are moved forward or back to change gears or more complex shifters which mimic those of real vehicles, which may also use a clutch. Most wheels turn only 200 to 270 degrees lock-to-lock but some models, such as the Logitech Driving Force Pro, Logitech G25 and Logitech G27 can turn 900 degrees, or 2.5 turns, lock-to-lock.

The Namco Jogcon paddle was available for the PlayStation game R4: Ridge Racer Type 4. Unlike "real" video game steering wheels, the Jogcon was designed to fit in the player's hand. Its much smaller wheel (diameter roughly similar to a soda can's) resembles the jog-and-shuttle control wheel used on some VCRs.

The game Mario Kart Wii is bundled with the Wii Wheel, a steering wheel-shaped shell that the Wii Remote is placed inside thus using the Wii Remote's motion sensing capabilities to control the game.

A yoke is very similar to a steering wheel except that it resembles the control yoke found on many aircraft and has two axes of movement: not only rotational movement about the shaft of the yoke, but also a forward-and-backward axis equivalent to that of pitch control on the yoke of an aircraft. Some yokes have additional controls attached directly to the yoke for simulation of aircraft functions such as radio push-to-talk buttons. Yokes, like throttle quadrants and pedals, are popular with serious flight-simulation enthusiasts. 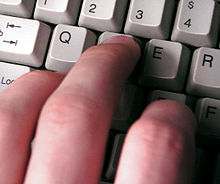 The keyboard and mouse are typical input devices for a personal computer and are currently the main game controllers for computer games. The mouse is often used with a mousepad to achieve greater speed, comfort, accuracy and smoother movement for the gamer. Some video game consoles also have the ability to function with a keyboard and a mouse. The computer keyboard is modeled after the typewriter keyboard and was designed for the input of written text. A mouse is a handheld pointing device used in addition to the keyboard. For games, the keyboard typically controls movement of the character while the mouse is used to control the game camera or used for aiming.

While originally designed for general computer input, there are several keyboard and mouse peripherals available which are designed specifically for gaming, often with gaming-specific functions built-in. Examples include peripherals by Razer, the "Zboard" range of keyboards and Logitech's 'G' series.

The numeric keypad found on the keyboard is also used as a game controller and can be found on a number of separate devices, most notably early consoles, usually attached to a joystick or a paddle. The keypad is a small grid of keys with at least the digits 0-9.

There are a few specialized controllers that are specifically used for FPSs, RTSs and some arcade type games. These controllers can be programmed to allow the emulation of keys, and macros in some cases. These generally resemble a small part of a keyboard but may also feature other inputs such as analog sticks. They were developed because some of these games require a keyboard to play, and some players find this to be awkward for such a task. 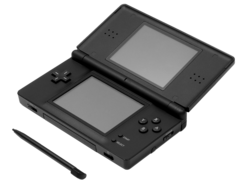 A touch screen is an input device that allows the user to interact with the computer by touching the display screen. The first attempt at a handheld game console with touchscreen controls was Sega's intended successor to the Game Gear, though the device was ultimately shelved and never released due to the expensive cost of touchscreen technology in the early 1990s.[2] The first released console to use a touchscreen was the Tiger game.com in 1997. Nintendo popularized it for use in video games with the Nintendo DS; other systems including the Tapwave Zodiac as well as the vast majority of PDAs have also included this feature. Nintendo's upcoming Wii U console will feature a controller with an embedded touchscreen.

Modern touch screens use a thin, durable, transparent plastic sheet overlayed onto the glass screen. The location of a touch is calculated from the capacitance for the X and Y axes, which varies based upon where the sheet is touched.

In 1993, the Sega Activator, based on the Light Harp invented by Assaf Gurner,[3] was released for the Mega Drive (Genesis). It could read the player's physical movements and was the first controller to allow full-body motion sensing. However, it was a commercial failure due to its "unwieldiness and inaccuracy".[4]

Nintendo's Wii system utilizes a new kind of controller, called the Wii Remote. It uses accelerometers to detect its approximate orientation and acceleration and an image sensor,[5] so it can be used as a pointing device. The Sixaxis, DualShock 3, and Move controllers for Sony's PlayStation 3 system have similar motion sensing capabilities. As of 2010, Microsoft has also released the Kinect, similar to Sony's Eyetoy, both of which use cameras to detect the player's motions and translate them into inputs for the game.

A light gun is a peripheral used to "shoot" targets on a screen. They usually roughly resemble firearms or ray guns. Their use is normally limited to rail shooters, or shooting gallery games like those that came with the Shooting Gallery light gun. A rare example is Taito's 1992 arcade game Gun Buster, a first-person shooter that used a joystick to move and a light gun to aim.[6]

Though light guns have been used in earlier arcade games such as Sega's Periscope in 1966[7] and Missile in 1969,[8] the first home console light gun was released for the Magnavox Odyssey in 1972; later on, Nintendo would include one standard on their Famicom and NES, called the NES Zapper. Nintendo has also released a "shell" in the style of a light gun for the more recent Wii Remote called the Wii Zapper which comes bundled with Link's Crossbow Training.

Since the controller is the most common way of interacting with a game, it has to be ergonomically designed to feel comfortable to most of their potential userbase to avoid injuries such as the ones in the RSI group or CTS. Most modern controllers are designed with the relaxed position of the hands in mind, which gave origin to the "pronged" design that reduced soreness and cramps after extended use with older pads such as the NES or the Sega Master System.

Also, Nintendo thumbs was a term coined in the early 90s after video game players had their thumbs badly burnt and even developed blisters due to the hardness of the buttons. A more common, less dangerous phenomenon sometimes known as a Nintendo cramp means the strain felt on the thumbs and the palm below. This tends to occur mostly when using particularly small controllers. The latter may in fact occur on any finger or the hand if it is kept in a prepared "arched" position for a long time, and is much less dangerous than Nintendo Fingers.

Currently, there are controller gloves available for the Wii Remote, Xbox 360 controllers, and Dualshock 3 controllers in stores to comfort players' hands.