The Science Museum is one of the three major museums on Exhibition Road, South Kensington, London in the Royal Borough of Kensington and Chelsea. It is part of the National Museum of Science and Industry. The museum is a major London tourist attraction.

Like other publicly funded national museums in the United Kingdom, the Science Museum does not levy an admission charge. Temporary exhibitions, however, do usually incur an admission fee.

A museum was founded in 1857 under Bennet Woodcroft from the collection of the Royal Society of Arts and surplus items from the Great Exhibition as part of the South Kensington Museum, together with what is now the Victoria and Albert Museum. It included a collection of machinery which became the Museum of Patents in 1858, and the Patent Office Museum in 1863. This collection contained many of the most famous exhibits of what is now the Science Museum. In 1883, the contents of the Patent Office Museum were transferred to the South Kensington Museum. In 1885, the Science Collections were renamed the Science Museum and in 1893 a separate director was appointed.[2] The Art Collections were renamed the Art Museum, which eventually became the Victoria and Albert Museum.

When Queen Victoria laid the foundation stone for the new building for the Art Museum, she stipulated that the museum be renamed after herself and her late husband. This was initially applied to the whole museum, but when that new building finally opened ten years later, the title was confined to the Art Collections and the Science Collections had to be divorced from it.[3] On June 26, 1909 the Science Museum, as an independent entity, came into existence.[3] The Science Museum’s present quarters, designed by Sir Richard Allison, were opened to the public in stages over the period 1919–28.[4] This building was known as the East Block, construction of which began in 1913 and temporarily halted by World War I. As the name suggests it was intended to be the first building of a much larger project, which was never realised.[5] 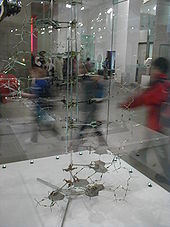 DNA reconstruction model built by Crick and Watson in 1953. 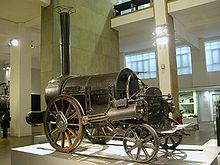 The Science Museum now holds a collection of over 300,000 items, including such famous items as Stephenson's Rocket, Puffing Billy (the oldest surviving steam locomotive), the first jet engine, a reconstruction of Francis Crick and James Watson's model of DNA, some of the earliest remaining steam engines, a working example of Charles Babbage's Difference engine (and the latter, preserved half brain), the first prototype of the 10,000-year Clock of the Long Now, and documentation of the first typewriter. It also contains hundreds of interactive exhibits. A recent addition is the IMAX 3D Cinema showing science and nature documentaries, most of them in 3-D, and the Wellcome Wing which focuses on digital technology.[6] Entrance has been free since 1 December 2001.

The museum houses some of the many objects collected by Henry Wellcome around a medical theme. The fourth floor exhibit is called "Glimpses of Medical History", with reconstructions and dioramas of the history of practiced medicine. The fifth floor gallery is called "Science and the Art of Medicine", with exhibits of medical instruments and practices from ancient days and from many countries. The collection is strong in clinical medicine, biosciences and public health. The museum is a member of the London Museums of Health & Medicine.

The Science Museum has a dedicated library, and until the 1960s was Britain's National Library for Science, Medicine and Technology. It holds runs of periodicals, early books and manuscripts, and is used by scholars worldwide. It has for a number of years been run in conjunction with the Library of Imperial College, but in 2007 the Library was divided over two sites. Histories of science and biographies of scientists are still kept at the Imperial College in London. The rest of the collection which includes original scientific works and archives are now located in Wroughton, Wiltshire.[7]

The Science Museum's medical collections have a global scope and coverage probably not bettered in the world. Strengths include Clinical Medicine, Biosciences and Public Health. The new Wellcome Wing, with its focus on Bioscience, makes the Museum the world's leading centre for the presentation of contemporary science to the public.

Some 170,000 items which are not on current display are stored at Blythe House in West Kensington. Blythe House also houses facilities including a conservation laboratory, a photographic studio, and a quarantine area where newly-arrived items are examined. [8]

In November 2003, the Science Museum opened the Dana Centre. The centre is an urban bar and café annexed to the museum. It was designed by MJP Architects.[9]

In October 2007 the Science Museum cancelled a talk by the co-discoverer of the structure of DNA, James D. Watson, because he claimed that IQ test results showed blacks to have lower intelligence than whites. The decision was criticised by some scientists, including Richard Dawkins,[10] as well as supported by other scientists, including Steven Rose.[11]

The Science Museum also organises "Science Night", "all night extravaganza with a scientific twist". Up to 380 children aged between 8 and 11, accompanied by adults, are invited to spend an evening performing fun "science based" activities and then spend the night sleeping in the museum galleries amongst the exhibits. In the morning, they're woken to breakfast and more science, watching an IMAX film before the end of the event. [12]

Video of a Corliss steam engine in the Power Gallery in motion.

The East Hall is the first area that most visitors see as they enter the building, stretching up through three floors. On the ground, the area is mostly filled with iconic steam engines of various sorts, including the oldest surviving James Watt beam engine, which together tell the story of the British industrial revolution. Up in the air, suspended from the ceiling is a giant metallic ring, the inside of which is covered in white LEDs which form patterns and display messages typed into kiosks by visitors in the Energy gallery. From 30 April 2008 until 1 November 2010 the hall houses Dan Dare & the Birth of Hi-tech Britain, an exhibition which "explores the role played by technology in creating post-war Britain."[13]

Exploring Space is a historical gallery, filled with rockets and exhibits that tell the story of human space exploration and the benefits that space exploration has brought us (particularly in the world of telecommunications). 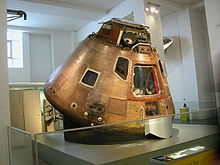 Making the Modern World is a relatively new gallery, in which some of the museum's most iconic objects, including Stephenson's Rocket and an Apollo spacecraft, are imaginatively displayed along a timeline chronicling man's technological achievements.

Flight is another longstanding gallery, up towards the western end of the third floor. Contained in the gallery are several full sized aeroplanes and helicopters, including Alcock and Brown's transatlantic Vickers Vimy (1919), Spitfire and Hurricane fighters, as well as numerous aero-engines and a cross-section of a Boeing 747.

One of the most popular galleries in the museum is the interactive Launchpad gallery. Redesigned and reopened in November 2007, the new look gallery houses over 50 interactive exhibits illustrating many different concepts in physical science. The gallery is staffed by Explainers who are available to demonstrate how exhibits work, conduct live experiments and perform shows to schools and the visiting public.

In 2008, The Science of Survival exhibition opened to the public and allowed visitors to explore what the world might be like in 2050 and how humankind will meet the challenges of climate change and energy shortages.

The museum is adjacent to the Natural History Museum and used to be connected to it by a public corridor, which is now closed. The closest London Underground station is South Kensington; a subway connects the museums to the station.

At the front of the museum to the east is Exhibition Road. Immediately to the south is Museum Lane and the Natural History Museum. To the rear is Queen's Gate and to the north is Imperial College.

The Science Museum underwent a series of refurbishments as part of a vision to update the museum. The East Hall has been finished and the renovated museum shop opened in October 2005.

The Science Museum's website has a variety of features, including collections information and the award-winning Launchball game.[citation needed]

Centennial volume: Science for the Nation

Directors of the Science Museum

Making the Modern World gallery from above.

The Directors of the South Kensington Museum were:

The Directors of the Science Museum have been:

The following have been Head/Director of the Science Museum in London, not including its satellite museums:

The following have been Directors of the National Museum of Science and Industry, which oversees the Science Museum and other related museums, from 2002: