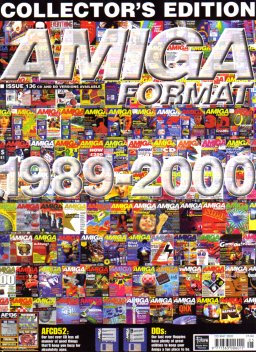 "Amiga Format" was a British for computers, published by . The magazine lasted 136 issues from 1989 to 2000. The magazine was formed when, in the wake of selling "ACE" to , Future split the dual-format title "" into two separate publications (the other being ""). At the height of its success the magazines sold over 170,000 copies per month, topping 200,000 with its most successful ever issue.

"Amiga Format" can be thought of the "mother" or "big sister" magazine of the more infamous magazine "", which it both predated and outlived. Whereas "Amiga Power" was strictly games-only, "Amiga Format" covered all aspects of Amiga computers, both hardware and software, both and gaming uses. A further spin-off was "", which dealt purely with the hardware and "serious" software side of the Amiga scene.

The magazine offered various multi-issue tutorials on different productivity software, such as C programming or graphics rendering. The last tutorial was cut short in the middle because of the cancellation of the magazine.

"Amiga Format" pioneered the concept of putting complete productivity software on a magazine coverdisk as a response to a moratorium on complete games titles being cover-mounted.

In one issue a competition was run to find the best game developed by a reader using a previously covermounted version of Blitz BASIC. A game called "Total Wormage" was entered by Andy Davidson but did not win &ndash; this game was later further developed and published by as the successful game, "Worms". Although this story has become popular part of the Worms mythology, nobody who was judging the games actually remembers seeing Worms at all...

While the continuing uncertainty about the Amiga platform's future slowed software development, there was an increase in the interest surrounding emulation software. long time contributor Simon Goodwin contributed one of the longest running series to the magazine, which broke down emulators by target platform and went through the mechanics of getting them working

Introduced in issue 129 and continuing until the final issue, "Just the FAQs" consisted of a single page each month containing an interview with a prominent figure in the Amiga community, with the exception of the January 2000 issue (published in December 1999), which instead explained the limited effects the would have on the Amiga. [Olaf Barthel, "Just the FAQs", "Amiga Format", January 2000 (issue 132), 86]

"Backstage" was a four page sent to s with each issue. The tone of the newsletter was less formal than that of the magazine, and it would often provide behind-the-scenes information on the activities of prominent members of the "Amiga Format" staff. "Backstage" also gave details of the contents of the Subscribers' Superdisk (an extra sent to subscribers, whose contents were also stored in a password-protected archive on the cover CD), and featured s for subscribers.