State Route 7 is a north–south state highway in the southern and eastern portions of the U.S. state of Ohio. At just over 292 miles (470 km) in length, it is the longest state route in Ohio.[1] Its southern terminus is an interchange with U.S. Route 52 just west of Chesapeake. Its northern terminus also serves as the eastern terminus of State Route 531 in Conneaut. The path of State Route 7 stays within five miles (8 km) of the Ohio River (Ohio's border with West Virginia) for the southern portion, with the river being visible from much of the route. The road also remains within ten miles (16 km) of the Pennsylvania state line for the northern portion.

Historical map of the Chesapeake Bypass

In 1961, the U.S. Route 52 expressway opened from Chesapeake westward towards Sheridan. The original eastern terminus of the four-lane divided highway was at the current Chesapeake northbound-only exit ramp east of Tallow Ridge Road [7]. U.S. Route 52 originally crossed at the present-day Robert C. Byrd Bridge that connects Chesapeake to Huntington, West Virginia. In 1979, the U.S. Route 52 designation moved to the Nick Joe Rahall II Bridge as tolls on that span were removed that year; the segment east of the Rahall Bridge to the Chesapeake interchange was renumbered to State Route 7.

Ten years later, the four-lane expressway was extended eastward to an incomplete trumpet interchange just east of Big Branch Road [8]. A four-lane connector route from the partially complete interchange to the foot of the Robert C. Byrd Bridge at State Route 527 was completed. At the same time, the two-lane Chesapeake interchange ramp just east of Tallow Ridge Road was converted to a northbound-only exit ramp. The abrupt terminus at Chesapeake was envisioned to connect to Proctorville.

On May 31, 2002, [5] ground was broken for Phase 1-A of the Proctorville bypass. [6] Phase 1-A entailed a two-lane connector road from the East Huntington Bridge to Irene Road, with the original loop ramp from the bridge to State Route 7 being modified into an access road. Phase 1-B was designated from Irene Road to State Route 7 near Fairland East Elementary in Rome. Phase 2 was envisioned from Irene Road west to Chesapeake. The total cost was originally estimated to be at $165 million [5].

On June 3, 2003, bids were opened for Phase 1-B from Irene Road to State Route 7 near Fairland East Elementary. [8] The projected cost of the 4.5-mile (7.2 km) segment was originally $27 million, however, when the bids were let, the cost had decreased to $24.3 million. The lowest bid, which was also accepted, came in at $22.1 million. [9] The road was designed as a two-lane limited-access facility on a four-lane right-of-way. Construction began on August 4 [10], with an original estimated completion date of June 30, 2005. 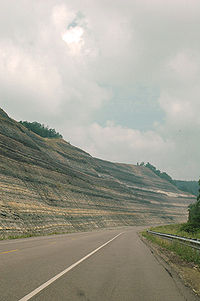 An unusual amount of rain, blamed on two hurricanes, caused major delays. [11] More than one-dozen major slips along Phase 1-B required an additional $30 million in repairs and the purchase of additional land for highwall excavations. Another change was the design of the roadway; originally projected to be widened in the future when higher traffic counts warrant the expansion, it was designed on wide right-of-way with no grade separation between the opposing lanes. During the repair of the slips, a terraced roadway was constructed to separate the future southbound lanes from the northbound by a highwall when the roadway is expanded to four lanes.

Other cost overruns had pushed the cost of construction to $62 million total, which included Phases 1-A and 1-B, up from the original estimates of $32 million. The primary cause was rapidly increasing land values and "unchecked zoning" along the project's projected right-of-way along with geo-technical problems with rocky soil. [8] Property values along the projected route, for instance, increased 91.5% from 1992 to 2001 alone. 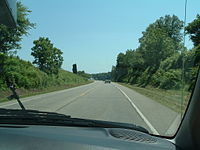 The highway somewhere between Marietta and Pomeroy

Phase 2 of the bypass, from the Chesapeake bypass to Irene Road at Proctorville, has not been funded. Funding which had been previously promised by the Ohio Department of Transportation was later denied. [4] Phase 2 is estimated to cost $76 million to complete [8]. Also due to the construction delays (slips) on the bypass from SR 775 to Fairland East Elementary School (Phase 1-B), the design of Phase 2 may be realigned to prevent slips during construction.

The Pomeroy bypass from Middleport east to U.S. Route 33 was completed in 1968. At the time of completion, the bypass was two lanes but was upgraded to four lanes, divided, in 1976 from State Route 143 to U.S. Route 33 near Rock Springs. The bypass was extended east in 2000 from Rock Springs to a partial diamond interchange with State Route 7 as a four-lane divided expressway. It was initially signed just State Route 7. The diamond interchange was later completed with all connections, and the highway was extended eastward to Ravenswood, West Virginia as U.S. Route 33.

The entire route is in Bridgeport, Belmont County.

Route 7T is a 0.36-mile (0.58 km)-long[13] temporary route beginning at US 62 in Youngstown. Route 7T dead ends but it is unclear from the straight line diagrams where Route 7T begins and ends.