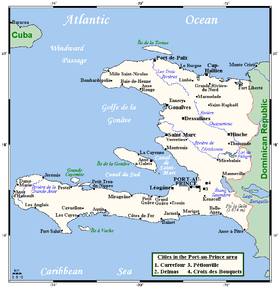 Natural hazards
Lies in the middle of the hurricane belt and subject to severe storms from June to October; occasional flooding and earthquakes; periodic droughts
Environment—current issues
Extensive deforestation (much of the remaining forested land is being cleared for agriculture and used as fuel); soil erosion; inadequate supplies of potable water
Environment—international agreements

Haiti is a very mountainous country with more than 3/4ths of the territory above 600 feet (183 m). Its climate is tropical and semiarid. Fertile valleys are interspersed between the mountain ranges forming vast areas of contrast between elevations in many areas throughout the territory. The country (and Hispaniola) is separated from Cuba by way of the Windward Passage, a 45 nmi (83 km; 52 mi) wide strait that passes between the two countries. Haiti's lowest elevation is reported by one source to be sea level (the Caribbean Sea[1]), by another source to be below sea level (Gheskio clinic, Port-au-Prince[2] or in Gonaïves, <-1m[3]), while its highest point is Pic la Selle at 2,680 m (8,793 ft).

Numerous smaller islands make up a part of Haiti's total territory. The most notable islands are:

Haiti also harbors several lakes. The largest lake of Haiti, and the second largest lake of Ile d'Haiti and the West Indies, is Lake Azuei. It is located in the Cul-de-Sac Depression with an area of 170 km². It is a saline lake with a higher concentration of salt than the sea water and harbors numerous fauna such as American Crocodiles and American Flamingos.

Lake Peligre is an artificial lake created by the construction of the Peligre Hydroelectric Dam.

Trou Caïman is a saltwater lake with a total area of 16.2 km². Lake Miragoâne is one of the largest natural freshwater lakes in the Caribbean, with an area of 25 km².

The climate is tropical, with some variation depending on altitude. Port-au-Prince ranges in January from an average minimum of 23 °C (73.4 °F) to an average maximum of 31 °C (87.8 °F); in July, from 25–35 °C (77–95 °F). The rainfall pattern is varied, with rain heavier in some of the lowlands and on the northern and eastern slopes of the mountains. Port-au-Prince receives an average annual rainfall of 1,370 mm (53.9 in). There are two rainy seasons, April–June and October–November. Haiti is subject to periodic droughts and floods, made more severe by deforestation. Hurricanes are also a menace.