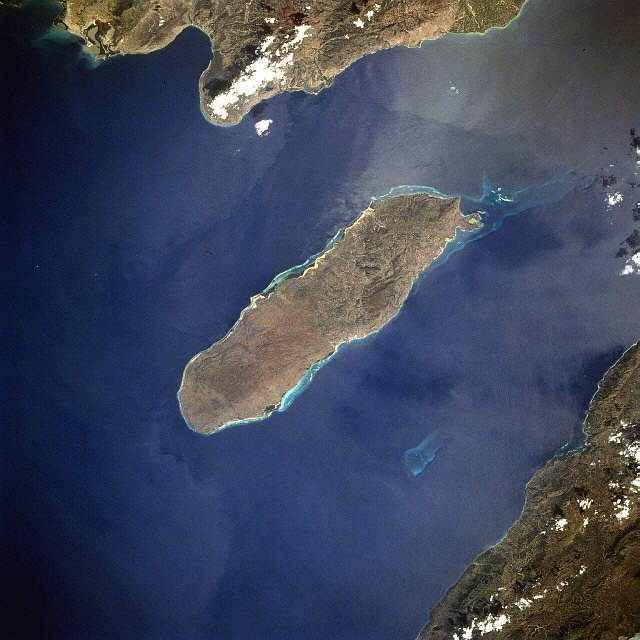 Gonâve Island ( _fr. Île de la Gonâve) is an island of located to the west-northwest of in the . It is the largest of the islands in terms of size located off the Hispaniolan mainland. The island is an in the and includes the communes of and . Made up of mostly , the reef-fringed island of Gonâve is 60 km (37 miles) long and 15 km (9 miles) wide and covers an area of 743 km² (287 sq. miles). The island is mostly barren and hilly with the highest point reaching 778 meters (2,552 ft). The island gets anywhere from 800 mm to 1600 mm of rain a year, higher areas representing the latter figure. Issues of overgrazing and water resource overexploitation affect the island's approximately 100,000 residents. The island was once used as a base for . [ [http://eol.jsc.nasa.gov/sseop/EFS/photoinfo.pl?PHOTO=STS060-84-56 National Aeronautics and Space Administration] ]

La Gonâve is referred to as one of the most water scarce locations in the world. Residents on the western side of the island are known to walk 12-15 kilometers roundtrip to collect their water that is often brackish.

In 2005 following a particularly drastic drought, the Mayor of Anse Gallets formed the Water Platform, composed of service groups working on the island. Current participants include the Mayors of Anse Gallets and Pointes a Racquette, the Deputy, Justice of the Peace, World Vision, Concern WorldWide, Sevis Kretyen, the Matenwa Learning Center, the Alleghany Weslyen Church, the Methodist Church, [http://www.haitioutreach.org Haiti Outreach] and many others. The Water Platform acts as a focal point for activities on the island, providing a coordination point for the multitude of groups working on La Gonâve.

As of 2007, there are two non-profit groups actively drilling water wells on the island [http://www.haitioutreach.org Haiti Outreach] and [http://www.gutschurch.com Guts Church] .

The [http://www.tougherthanhell.com Tougher Than Hell Motorcycle Rally] , organized by [http://www.gutschurch.com Guts Church] in has sponsored 8 water wells drilled on the island.

[http://www.haitioutreach.org Haiti Outreach] has financed and drilled water wells in 10 communities designated by the Water Platform.

The drilling of more wells on the island has been planned for the near future.