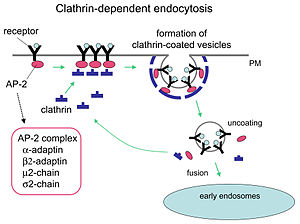 Receptor-mediated endocytosis (RME), also called clathrin-dependent endocytosis, is a process by which cells internalize molecules (endocytosis) by the inward budding of plasma membrane vesicles containing proteins with receptor sites specific to the molecules being internalized.

After the binding of a ligand to plasma membrane-spanning receptors, a signal is sent through the membrane, leading to membrane coating, and formation of a membrane invagination. The receptor and its ligand are then opsonized in clathrin-coated vesicles. Once opsonized, the clathrin-coated vesicle uncoats (a pre-requisite for the vesicle to fuse with other membranes) and individual vesicles fuse to form the early endosome. Since the receptor is internalized with the ligand, the system is saturable and uptake will decline until receptors are recycled to the surface. Common for biology.

The function of receptor-mediated endocytosis is diverse. It is widely used for the specific uptake of certain substances required by the cell (examples include LDL via the LDL receptor or iron via transferrin). The role of receptor-mediated endocytosis is also well recognized in the downregulation of transmembrane signal transduction. The activated receptor becomes internalised and is transported to late endosomes and lysosomes for degradation. However, receptor-mediated endocytosis is also actively implicated in transducing signals from the cell periphery to the nucleus. This became apparent when it was found that the association and formation of specific signaling complexes is required for the effective signaling of hormones (e.g. EGF). Additionally it has been proposed that the directed transport of active signaling complexes to the nucleus might be required to enable signaling as random diffusion is too slow[1] and mechanisms permanently downregulating incoming signals are strong enough to shutdown signaling completely without additional signals transducing mechanisms.[2]

Since the process is non-specific, the ligand can be a carrier for larger molecules. If the target cell has a known specific pinocytotic receptor drugs can be attached and will be internalized.