New Harmony is a historic town on the Wabash River in Harmony Township, Posey County, Indiana, United States. It lies 15 miles (24 km) north of Mount Vernon, the county seat. The population was 916 at the 2000 census. It is part of the Evansville metropolitan area. Many of the old Harmonist buildings still stand and have been restored. The New Harmony State Memorial is located here. Just to the south of town on State Road 69 is Harmonie State Park.

New Harmony, formerly named Harmony, was founded by the Harmony Society, headed by German immigrant George Rapp (actually Johann Georg Rapp) in 1814. This was the second of three towns built by the pietist, communal German religious group, known as Harmonists, Harmonites or Rappites; they settled in Indiana after leaving Harmony, Pennsylvania, and after leaving Indiana, they founded the community of Economy, Pennsylvania, now called Ambridge. When the society decided to move back to Pennsylvania around 1824, they sold the 30,000 acres (120 km2) of land and buildings to Robert Owen, the Welsh utopian thinker and social reformer, and to William Maclure for $150,000, who then changed the name from "Harmony" to "New Harmony." Owen recruited residents to his model community, but a number of factors led to an early breakup of the socialist community. 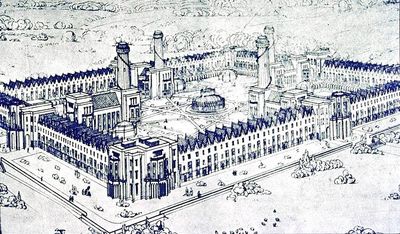 New Harmony as envisioned by Owen

The figure shown here as "New Harmony as envisioned by Owen" was captioned by the architect who drew the figure, Stedman Whitwell, as "Design for a Community of 2000 Person founded upon a principle Commended by Plato, Lord Bacon and Sir Thomas More." Whitwell (1784–1840) lived in New Harmony during 1825.[3] In Edward Royle's Robert Owen and the Commencement of the Millennium, (Manchester University Press, 1998), Whitwell's figure is presented in a chapter on Harmony, the name of Owen's community in Hampshire, England, dating from 1841, although the figure was published in 1830 and almost certainly existed as early as 1825.

The experiment was established in 1825 and dissolved in 1829 due to constant quarrels. The town banned money and other commodities. Individualist anarchist Josiah Warren, who was one of the original participants in the New Harmony Society, asserted that the community was doomed to failure due to a lack of individual sovereignty and private property. He wrote of the community: "It seemed that the difference of opinion, tastes and purposes increased just in proportion to the demand for conformity. Two years were worn out in this way; at the end of which, I believe that not more than three persons had the least hope of success. Most of the experimenters left in despair of all reforms, and conservatism felt itself confirmed. We had tried every conceivable form of organization and government. We had a world in miniature. --we had enacted the French revolution over again with despairing hearts instead of corpses as a result. ...It appeared that it was nature's own inherent law of diversity that had conquered us ...our 'united interests' were directly at war with the individualities of persons and circumstances and the instinct of self-preservation... and it was evident that just in proportion to the contact of persons or interests, so are concessions and compromises indispensable." (Periodical Letter II 1856).

Although Owen's vision of New Harmony as an advance in social reform was not realized, the town did become a scientific center of national significance. As President of the Academy of Natural Sciences of Philadelphia, William Maclure brought naturalists Thomas Say and Charles-Alexandre Lesueur to New Harmony from Philadelphia. Say has been called the father of American entomology and the father of American conchology. Many species were first described by both Say and Leseuer, and many have been named in their honor. Say died in New Harmony in 1834, and Leseuer returned to his native France in 1837.

The Church of the Harmonists; sketch by Charles Alexandre Lesueur. From the collection of the Academy of Natural Sciences of Philadelphia, one of many sketches preserved in the Lesueur Collection at the Academy. Shown here by courtesy of the Academy.

In 1837, David Dale Owen, a son of Robert Owen, finished his formal education as a medical doctor. However, returning to New Harmony, and having been much influenced by Robert Maclure and Gerhard Troost, Owen became a geologist. With headquarters in New Harmony, Owen conducted the first official geological survey of Indiana (1837–39), and he led federal surveys in 1839-40 and 1847-51. Owen was the first state geologist of three states: Indiana, Kentucky, and Arkansas. His museum in New Harmony was known as the largest museum west of the Alleghenies. At the time of his death in 1860, the museum included some 85,000 items. Of Owen's many publications, perhaps the most significant is his 638-page Report of a Geological Survey of Wisconsin, Iowa, and Minnesota and Incidentally of a Portion of Nebraska Territory, including colored maps and drawings of fossils, published in Philadelphia in 1852.

One of David Dale Owen's colleagues and co-authors, also a medical doctor, was Joseph Granville Norwood. Dr. Norwood was the first state geologist of Illinois (1851–1858). From 1851 to 1854, the Illinois State Geological Survey was headquartered in New Harmony.

In 1838, William Maclure established The Working Men's Institute in New Harmony. It includes the oldest continuously operating library in the state of Indiana, as well as a small museum. The vault in the library contains many historic manuscripts, letters, and documents pertaining to the history of New Harmony.

The eldest son of Robert Owen was Robert Dale Owen (several of Robert Owen's children were given the middle name Dale in honor of Owen's father-in-law, David Dale), a social reformer and intellectual of national importance. As a member of the U. S. House of Representatives from 1843 to 1847, he introduced the bill establishing the Smithsonian Institution, and he served as chairman of the Smithsonian Building Committee. He arranged for his brother David Dale Owen to sample a large number of possible building stones for the Smithsonian Castle.[7] D. D. Owen selected the distinctive Seneca Creek Sandstone of which that building is constructed.[8]

Later, R. D. Owen held the diplomatic position of charge d'affairs (1853–1858) in Naples, Italy. In the 1850s, he began studying spiritualism, and in 1860, his book Footfalls on the Boundary of Another World aroused something of a literary sensation. Among his hecklers in the Boston Investigator and at home in the New Harmony Advertiser were John and Margaret Chappellsmith, he formerly an artist for David Dale Owen's geological publications, and she a former Owenite lecturer.

The history of education at New Harmony involves several teachers who, already well-established in their fields, moved to New Harmony, largely through the efforts of William Maclure. These Pestalozzian educators included Marie Duclos Fretageot, Joseph Neef, Lucy Sistaire Say, and Cornelius Tiebout. Fretageot had managed a Pestalozzian school in Philadelphia and in New Harmony became Maclure's administrator during his residence in Mexico. The correspondence of Maclure and Fretageot, 1820-1833 was extensive and is documented in Joesphine Mirabella Elliott's 1182-page book, Partnership for Posterity.

In 1808, Joseph Neef published the first work on educational method to be written in English in the United States, entitled Sketch of A Plan and Method of Education. Neef, following Maclure's curriculum, superintended the higher school in New Harmony, in which were enrolled up to 200 students, ranging in age from five to twelve. On March 23, 1837, two of Joseph and Luise Neef's daughters married two of Robert Owen's sons. In fact, it was a triple marriage, the partners being Richard Owen and Anne Eliza Neef, David Dale Owen and Caroline Neef, and William Owen and Mary Bolton.

Lucy Sistare had been an apprentice at Fretageot's Pestalizzioan school in Philadelphia. On her way to New Harmony she got to know Thomas Say, and they were married in Mt. Vernon, near New Harmony, on January 4, 1827. As an accomplished artist, Lucy Say made 66 of the 68 illustrations in her husband's book, American Conchology, of which Parts 1 - 6 were published in New Harmony during 1830-1834; Part 7 was published in Philadelphia in 1836.

Cornelius Tiebout was an artist and printer of considerable fame at the time he joined the New Harmony community in September, 1826. In New Harmony, he taught printing. Among Tiebout's best-known engravings are George Washington (1798), Thomas Jefferson, President of the United States (1800), Thomas Jefferson, President of the United States (1801), Constitution (USS Constitution dueling with British frigate Guerriere, War of 1812, engraved 1813). These and others are well represented on the Internet. Tiebout died in New Harmony in 1832.

There were 382 households out of which 27.0% had children under the age of 18 living with them, 46.9% were married couples living together, 9.9% had a female householder with no husband present, and 40.1% were non-families. 38.0% of all households were made up of individuals and 21.2% had someone living alone who was 65 years of age or older. The average household size was 2.12 and the average family size was 2.80. 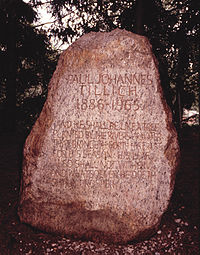 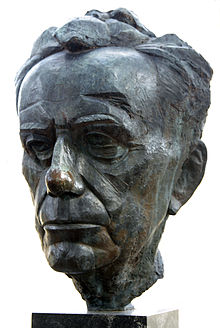 Paul Tillich Park commemorates the renowned 20th century theologian, Paul Johannes Tillich. The park was dedicated on 2 June 1963, and Tillich's ashes were interred there in 1965.

Located just across North Main Street from the Roofless Church in New Harmony, Indiana, the park consists of a stand of evergreens on elevated ground surrounding a walkway. Along the walkway there are several large stones on which are inscribed quotations from Tillich's writings. James Rosati's sculpture of Tillich's head rises at the north end of the walkway, backed by a clearing and a large pond.

Those who walk the Tillich Park Finger Labyrinth, which was created by Rev. Bill Ressl after an inspirational walk through the park, are also invited to ponder the quotations and discern Tillich's systematic theology.

The Atheneum and Richard Meier