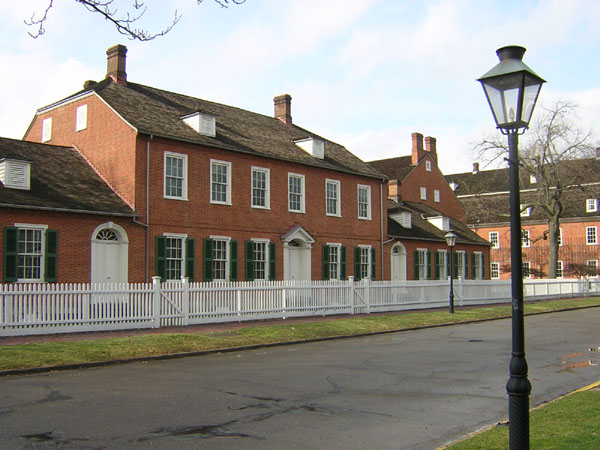 imagesize =
image_caption = The Rapp House in

The town is near the location of , the training camp for General "Mad" Anthony Wayne's . Wayne's was the first attempt to provide for regular U.S. Army recruits and Legionville was the first facility established expressly for this purpose.

The first settled the area in the early 1800s, founding the village of "Ökonomie" or Economy in 1824. Although initially successful, accumulating significant landholdings, the sect went into decline. By the end of the nineteenth century only a few Harmonists remained. The Society was dissolved and its vast real estate holdings sold, much of it to the , who subsequently enlarged the town and incorporated it as Ambridge in 1905.

American Bridge attracted thousands of immigrants who came to fulfill their dreams of work, freedom, and peace. The steel mills became the focal point of the town. Most of the employees were relatives of relatives and the small town grew, with wards separating the town into ethnic sections. The First street gang, the third ward crew, and the up towners... everyone had a nickname such as "Billy the Greek", "Luke the Cro", "Froggy", and "Scumpski".Fact|date=February 2008

With the growth of the steel mills, Ambridge became a world-wide leader in steel production.Fact|date=February 2008 The borough became known for bridge building, metal molding, and the manufacture of tubes (large iron pipes). During , numerous small vessels such as LSTs were constructed in Ambridge by the American Bridge Company. The area was also home to several other steel mills like Armco, the pipe mill who manufactured oil piping, and A.M. Byers, a major iron and tool fabricator. Eventually competition by foreign steel producers began to dwindle the share of the steel market for U.S. manufacturers. With the shift of steel production to areas overseas, the Ambridge Bridge Company ended operations in Ambridge in 1983. The legacy of American Bridge can be seen today from coast to coast, from the Golden Gate Bridge in San Francisco to the Brooklyn Bridge in New York.

Even though the steel mills no longer dominate the landscape, Ambridge remains the home of , a administered by the . The site interprets the , one of America's most successful 19th century Christian communal societies. Old Economy Village also provides public education and preservation of the Society's unique material culture. Founded by , it was the third and final location of the Harmonites. Established in 1824, Old Economy - known to the Harmonites as "Ökonomie" - was founded upon German , which called for a higher level of purity within . Soon the Harmonites were not only known for their piety, but also for their production of wool, cotton, and silk. As a pioneer in the American silk industry, Economy became known as the American silk center in the 1830s and 1840s. Today, the site maintains seventeen carefully restored structures and gardens that were built between 1824 and 1830. The buildings reflect the unusual life style of the organization, which, by the 1840s, was well renowned for its economic success in textile production. The site also portrays the community's involvement with agricultural production, railroads, and oil. The recreated gardens encompass more than two acres, providing colorful 19th century flowers. The gardens' formal pathways, stone pavilion, and seasonal flowering hedges are among the striking features. Old Economy's buildings, grounds, library, archives and 16,000 original artifacts are fused to create an interpretive facility for the Commonwealth.

Although the different ethnic groups of Ambridge have blended over time, the community continues to recognize the origins from which it came. Since 1966, Ambridge has held an annual heritage festival celebrating the borough's ethnic pride. Diversity in food, music, and entertainment continues to unite the community in remembering its origins. Organized by the Ambridge Chamber of Commerce, the three-day Nationality Days festival takes place in May and is located in the heart of the downtown Commercial District. Vendors line the center of Merchant Street as thousands of attendees – locals and tourists – enjoy Italian, Ukrainian, Greek, Polish, German, Croatian, and Slovenian cuisine. Booths are sponsored by numerous churches in Ambridge, bringing with them the recipes for their cultural dishes such as pirohy, haluski, stuffed cabbage, and borscht. Live entertainment, arts and crafts, and children's activities are also available.

With Ambridge now over 100 years old, revitalization is beginning to occur along Merchant Street in the Downtown Commercial District. Entrepreneurs and investors have begun to renovate the Victorian facades of the commercial storefronts. Antique shops are opening in the Historic District, which is also a National Historic Landmark, and a once industrial warehouse area is being converted to condominiums, shops, and parks. In 2007 Ambridge was designated as a Preserve America Community by the White House. Convenient to Pittsburgh along the Ohio River Boulevard and just across the Ohio River from the Pittsburgh Airport, Ambridge leaders hope it will benefit by its location and low cost of living.

There were 3,595 households out of which 23.2% had children under the age of 18 living with them, 32.6% were married couples living together, 16.9% had a female householder with no husband present, and 45.3% were non-families. 39.8% of all households were made up of individuals and 18.5% had someone living alone who was 65 years of age or older. The average household size was 2.14 and the average family size was 2.88.

The town is served by the [http://www.ambridge.k12.pa.us/] . The town's high school is . Students and citizens, are known by the locals as "Bridgers", which is also the name of the football team.

Ambridge is also home to , a of the .