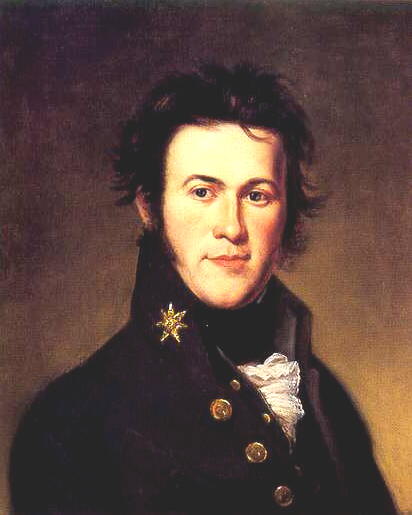 Thomas Say (, &ndash; , ) was an American naturalist, , and . He was a and is often considered to be the father of descriptive in the United States and one of the founding fathers of the (ESA). ESA maintains several series of publications and awards that are named after Say.

Thomas Say was born in into a prominent Quaker family. He was the great grandson of , and the great-nephew of , whom Say frequently visited as a boy with butterfly and beetle specimens.

Say became an apothecary in his native town, but his interests soon turned to nature and he became a self-taught naturalist. In 1812 he became a charter member and founder of the of Philadelphia (ANSP).

Say began his work on American Entomology at the Academy.He began a tradition of expeditions to collect specimens of insects. These expeditions were not without risks: Indian attacks, dangers of the frontier, hazards of traveling in wild countryside.

In 1818 Say accompanied his friend (1763-1840), president of the ANSP (1817-1840) and father of American , Gerhard Troost, a geologist, and other members of the Academy on a geological expedition to the off-shore islands of Georgia and , then a Spanish colony.

In 1819-1820, Major led an exploration to the and the tributaries of the with Thomas Say as zoologist. The official account of this expedition included the first descriptions of the , , , , , , , , and .

In 1823, Say served as chief zoologist in Long's expedition to the headwaters of the .

Thomas Say travelled on the famous "Boatload of Knowledge" to an n society experiment, the "New Harmony Settlement" in (1826-1834), a venture of . One of the passengers was Lucy Way Sistare, whom Say married secretly near New Harmony on January 4, 1827. She was an artist and illustrator of specimens (such as in the book 'American Conchology') who later became the first female member of the Academy. He was accompanied by Maclure, Lesueur, Francis Neef, an educator, and Gerhard Troost. There he later met another naturalist, (1783-1840).

In the settlement of New Harmony, Thomas Say carried on his monumental work describing insects and mollusks, leading to two classic works:
* "American Entomology, or Descriptions of the Insects of North America", 3 volumes, Philadelphia, 1824-1828.
* "American , or Descriptions of the Shells of North America Illustrated From Coloured Figures From Original Drawings Executed from Nature", Parts 1 - 6, New Harmony, 1830-1834; Part 7, Philadelphia, 1836.

During their years in New Harmony both Say and Lesueur experienced considerable difficulties. Say was a modest and unassuming man, living frugally, like a hermit, abandoning commercial activities and devoting himself to his studies.