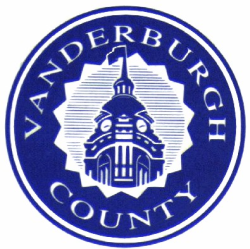 Vanderburgh County was formed in 1818 from Gibson, Posey, and Warrick Counties. It was named for Capt. , veteran and judge for the .

The county government is a constitutional body, and is granted specific powers by the , and by the .

County Council: The county council is the legislative branch of the county government and controls all the spending and revenue collection in the county. Representatives are elected from county districts. The council members serve four year terms. They are responsible for setting salaries, the annual budget, and special spending. The council also has limited authority to impose local taxes, in the form of an income and property tax that is subject to state level approval, excise taxes, and service taxes.

Court: The county maintains a that can handle some civil cases. The judge on the court is elected to a term of four years and must be a member of the Indiana Bar Association. The judge is assisted by a constable who is also elected to terms of four years. In some cases, court decisions can be appealed to the state level .

Interstate 164 is the route of choice of Interstate 69 in Vanderburgh County. Not all of I-164 will become I-69. Plans for the remainder of I-164 are currently unknown.