The London, Tilbury and Southend Railway is an English railway line linking Fenchurch Street railway station in the City of London with northeast London and the entire length of the northern Thames Gateway area of southern Essex. It is currently known as the Essex Thameside Route by Network Rail and forms part of strategic route 6.[1] It is classified as a London and South East commuter line.[2] Train services on the line are currently operated by c2c, a train operating company that is part of the National Express Group.

The main route from Fenchurch Street to Shoeburyness via Basildon is 39.5 miles (63.57 km) and the fastest timetabled journey time from Fenchurch Street to Shoeburyness is 58 minutes[3] giving an average speed of 40.7 mph, although the route can be done in 47 minutes, giving an average speed of 50 mph.[1] A loop line serving Tilbury provides an alternative connection from London to Southend; and a branch line connecting the two via Chafford Hundred forms a third route. The line currently has a maximum speed limit of 75 mph (121 km/h), although the Class 357 Electrostar trains which run on it are capable of a maximum speed of 100 mph (160 km/h).

Construction of the line was authorised by Parliament on 17 June 1852.[4] The first section, constructed by Peto and Grissell, was opened between Forest Gate junction on the Eastern Counties Railway and Tilbury, via Barking and Grays on 13 April 1854.[5] Services initially ran from Fenchurch Street and Bishopsgate stations over existing lines to Stratford and Forest Gate junction. The line was extended from Tilbury to Southend in 1856.[5] In 1858 a more direct route to Fenchurch Street was constructed through Bromley, Plaistow and East Ham,[5] connecting with the London and Blackwall Extension Railway at Bow; and the service from Bishopsgate was withdrawn. Under the management of civil engineer Arthur Lewis Stride the line was extended from Southend to Shoeburyness in 1884.[5] A more direct route from Barking to Pitsea via Upminster was constructed between 1885 and 1888, completing the current main route.[5] A single line branch was constructed between Romford and Grays via Upminster during 1892 and 1893. 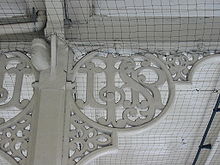 In 1902 the Whitechapel and Bow Railway was constructed as a joint venture with the Metropolitan District Railway, connecting the London, Tilbury and Southend Railway at Bow with the Metropolitan District at Whitechapel. The connection allowed through running of Metropolitan District trains from the tunnels under central London to provide local services to Upminster from 2 June 1902.[6] When the Metropolitan District and Whitechapel and Bow Railway lines were electrified, an additional pair of tracks were constructed between Bow and East Ham and the service was cut back to there on 30 September 1905.[6] The electrified tracks were extended to Barking and opened on 1 April 1908.[6] Delayed by World War I,[5] the electric tracks were extended to Upminster and District line services started on 12 September 1932.[6] The London Plan Working Party Report of 1949 envisaged as its Route G the LTSR electrified and diverted away from Fenchurch Street to the Bank and on through the Waterloo & City Line tunnels to Waterloo and its suburban lines.[7] Of course, the Waterloo & City tunnels would have had to be bored out to main line size for this "Crossrail" to happen. However, electrification went ahead from 1961 to 1962 [5] and direct passenger services from Bromley, Plaistow, Upton Park, East Ham, Becontree, Dagenham and Hornchurch to Fenchurch Street were withdrawn. In 1974 a station opened to serve the new town of Basildon and in 1995 a station was built at Chafford Hundred to serve the new community there and Lakeside Shopping Centre. Platforms were reestablished and opened at West Ham station in 1999 to provide interchange with the extended Jubilee line.

The railway was initially jointly promoted by the Eastern Counties Railway and London and Blackwall Railway and was leased for 21 years to Peto, Brassey and Betts.[8] The Midland Railway and London, Tilbury and Southend Railway jointly constructed the Tottenham and Forest Gate Railway, which enabled through running of trains between St Pancras railway station and Tilbury Docks.[5] In 1912 the London, Tilbury and Southend Railway was purchased by the Midland Railway.[5] At grouping in 1923, the line became part of the London, Midland and Scottish Railway.[5] The London, Midland and Scottish Railway was nationalised into British Railways in 1948 and in 1949 became part of the Eastern Region. In 1986 the route was transferred to the Network SouthEast sector of British Rail. On privatisation in 1996, ownership passed to Railtrack and Prism Rail took over operations; marketing the route as LTS Rail.[5] Ownership passed to Network Rail in 2002. Prism Rail were bought out by National Express Group in 2000 and in 2002 the line was rebranded as c2c.

The line was known for its use of 4-4-2 tank engines which were later displaced by 2-6-4Ts after it had been absorbed into the London, Midland and Scottish Railway (LMS) in 1923. In 1958 an accident at Dagenham East caused the loss of 10 lives. 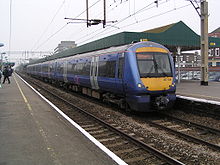 During the early 1990s proposals were put forward to convert the whole line into a guided busway, however these plans were quickly dismissed when British Rail announced a complete re-signalling of the line. Over the years the LTS had been used in an almost experimental fashion and contained a whole host of different signalling systems (e.g. geographical, WESTPAC and relay interlockings). In 1995 work got underway to replace everything from signals and point machines to whole junctions.

The main contractor for the work was GEC Alsthom who provided a Mark 3 Solid State Interlocking (SSI) system with SEMA providing the IECC element at Upminster that replaced all signal boxes on the whole line. Main line running signals mostly became 4 aspect colour lights (replacing searchlight signals amongst others), all point machines were replaced with HW2000 machines and the whole line had a complete fibre optic network installed. All level crossings were renewed with full barriers to be CCTV controlled by a designated workstation at Upminster.

The main line between Fenchurch Street and Shoeburyness was also bi-directionally signalled (with 3 aspect signalling) along most parts, with the bi-directional section alternating from one track to the other between certain stations, to provide maximum flexibility for continuing operations should disruption occur.

The line was re-signalled over the Easter weekend 1996 when all the signal boxes from Fenchurch Street to Shoeburyness (via Basildon)were switched out and control was transferred to Upminster IECC. This was later followed over the 1996 August bank holiday when Upminster took control from the remaining boxes on the Tilbury Loop. 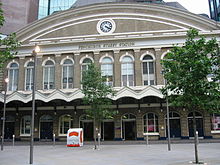 The main terminus is Fenchurch Street

When necessary, due to engineering work or other problems, trains can be diverted at Barking over the Gospel Oak to Barking Line and then the Great Eastern Main Line to call at Stratford and Liverpool Street. Trains diverted at Barking, having passed Stratford, can also rejoin the London, Tilbury and Southend line before Limehouse (avoiding West Ham) and continue to Fenchurch Street. This diversionary route is less often used and consists of a short section of single track at Bow. From May 1985[4] to May 2007, the weekday evening service after 22:30 operated from Liverpool Street. As of May 2010, most through services now start and terminate at Fenchurch Street, with a limited number of early morning and late night services operating to and from Liverpool Street.[3]

A link to the London Gateway deep water port under construction present will be linked to the line. Work of the port started in February 2010 and it is expected to handle 3.5 million TEU and be completed over the next ten to 15 years.[12]

Of the original LTS, 4-4-2T number 80 survives as a stationary exhibit at Bressingham Steam Museum in Norfolk. An ex-LT&S BR Std (80079) is preserved, currently as a stationary exhibit, on the Severn Valley Railway in Shropshire. Another ex LTS locomotive BR 42500 is the sole remaining member of the 36 3 cylinder 2-6-4 tank engines built by the LMS in the 1930s for the London Tilbury and Southend line. It is preserved in LMS livery at the National Railway Museum in York.