Boer
Not to be confused with Boyar or Jack Bauer.

For other uses, see Boer (disambiguation)

/ˈbʊər/, /ˈboʊ.ər/, or /ˈbɔər/; Afrikaans: [ˈbuːr]) is the Dutch and Afrikaans word for farmer, which came to denote the descendants of the Dutch-speaking settlers of the eastern Cape frontier[2] in Southern Africa during the 18th century, as well as those who left the Cape Colony during the 19th century to settle in the Orange Free State, Transvaal (which are together known as the Boer Republics), and to a lesser extent Natal. Their primary motivations for leaving the Cape were to escape British rule and extract themselves from the constant border wars between the British imperial government and the native tribes on the eastern frontier. 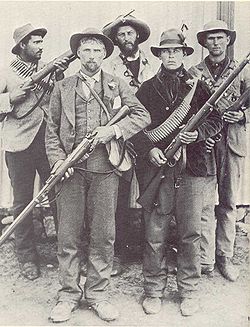 The Trekboere, as they were originally known, were mainly of Dutch origin and included Calvinists, Flemish and Frisian Calvinists, as well as French Huguenot[3] and German and British protestants who first arrived in the Cape of Good Hope during the period of its administration (1652 – 1795) by the Dutch East India Company (Verenigde Oostindische Compagnie or VOC). Lesser migrations of Scandinavians, Portuguese, Greeks, Italians, Spanish, Polish, Scots, English and Irish immigrants also contributed to this ethnic mix.

For more information on history before the Great Trek, see Afrikaner.

Those Trekboers who trekked into and occupied the eastern Cape were semi-nomadic. A significant number in the eastern Cape frontier later became Grensboere ("border farmers") who were the direct ancestors of the Voortrekkers. The Voortrekkers were those Boers (mainly from the eastern Cape) who left the Cape en masse in a series of large scale migrations later called the Great Trek beginning in 1835 as a result of British colonialism and constant border wars. When used in a historical context, the term Boer may refer to an inhabitant of the Boer Republics as well as those who were cultural Boers.

Though the Boers accepted British rule without resistance in 1877, they fought two wars in the late 19th century to defend their internationally recognized independent countries, the republics of the Transvaal (the Zuid-Afrikaansche Republiek, or ZAR) and the Orange Free State (OFS), against the threat of annexation by the British Crown. This led the key figure in organizing the resistance, Paul Kruger, into conflict with the British.[4]

After the second Anglo-Boer War, a Boer diaspora occurred. Starting in 1903, the largest group emigrated to the Patagonia region of Argentina. Another group emigrated to British-ruled Kenya, from where most returned to South Africa during the 1930s, while a third group under the leadership of General Ben Viljoen emigrated to Mexico and to New Mexico and Texas in south-western USA.

The Maritz Rebellion or the Boer Revolt or the Five Shilling Rebellion or the Third Boer War, occurred in South Africa in 1914 at the start of World War I, in which men who supported the re-creation of the old Boer republics rose up against the government of the Union of South Africa because they did not want to side with the British against Germany so soon after they had had a long bloody war with the British. Many Boers had German ancestry and many members of the government were themselves former Boer military leaders who had fought with the Maritz rebels against the British in the Second Boer War, which had ended only twelve years earlier. The rebellion was put down by Louis Botha and Jan Smuts, and the ringleaders received heavy fines and terms of imprisonment. A renowned Boer, Jopie Fourie, was executed for treason in 1914. He was convicted as a rebel when, as an officer in the Union Defence Force, he refused to take up arms with the British.

The desire to wander, known as trekgees, was a notable characteristic of the Boers. It figured prominently in the late 17th century when the Trekboers began to inhabit the northern and eastern Cape frontiers, again during the Great Trek when the Voortrekkers left the eastern Cape en masse, as well as after the major republics were established during the Thirstland Trek.[5] When one such trekker was asked why he has emigrated he explained, "a drifting spirit was in our hearts, and we ourselves could not understand it. We just sold our farms and set out north-westwards to find a new home."[5] A rustic characteristic and tradition was developed quite early on as Boer society was born on the frontiers of white settlement and on the outskirts of civilization.[2]

The Boers had cut their ties to Europe as they emerged from the Trekboer group.[6]

The Boer quest for independence manifested in a tradition of declaring republics, which predates the arrival of the British; when the British arrived, Boer republics had already been declared and were in rebellion from the VOC (Dutch East India Company).[7]

The Boers of the frontier were known for their independent spirit, resourcefulness, hardiness, and self-sufficiency, whose political notions verged on anarchy but had begun to be influenced by republicanism.[7] Most of the men were also skilled with the use of guns as they would hunt and also were able to protect their families with them.

The Boer nation is well known for their strong nationalistic characteristics. Their nationalism was born of hundreds of years of fighting against imperialism, a continuing struggle for independence battling mainly British expansion into central South Africa, as well as the harsh African climate, a strong sense of nationhood. As with any other ethnic group that has come from troubled land to troubled land, many of them see it as their duty to educate future generations on their people's past.[citation needed]

The Boer nation is mainly descended from Dutch, German and French Huguenots, who migrated to South Africa during the 17th, 18th and early 19th centuries. The Boer nation has revealed a distinct Calvinist culture and the majority of Boers today are still members of a Reformed Church. The Nederduits Hervormde Kerk was the national Church of the South African Republic (1852–1902). Also note the "Orange" in Orange Free State (1854–1902) was named after the Protestant House of Orange in the Netherlands.

The Calvinist influence remains in that some fundamental Calvinist doctrines such as unconditional predestination and divine providence remains present in much of Boer culture, who see their role in society as abiding by the national laws and accepting calamity and hardship as part of their Christian duty.[8]

A small number of Boers may also be members of Baptist, Pentecostal or Lutheran Churches.

During recent times, mainly during the apartheid reform and post-1994 eras, many more white Afrikaans-speaking people, mainly with "conservative" political views and of Trekboer and Voortrekker descent, have preferred to be called "Boers" or Boere-Afrikaners, rather than "Afrikaners".[9] They feel that there were many people of Voortrekker descent who were not co-opted or assimilated into what they see as the Cape-based Afrikaner identity which began emerging after the Second Anglo-Boer War and the subsequent establishment of the Union of South Africa in 1910. Certain Boer nationalists have asserted that they do not consider themselves a right-wing element of the political spectrum.[10]

The supporters of these views feel that the Afrikaner designation (or label) was used from the 1930s onwards as a means of unifying (politically at least) the white Afrikaans speakers of the Western Cape with those of Trekboer and Voortrekker descent (whose ancestors began migrating eastward during the late 17th century and throughout the 18th century and later northward during the Great Trek of the 1830s) in the north of South Africa, where the Boer Republics were established.[9]

Since the Anglo-Boer war the term "Boervolk" was rarely used in the 20th century by the various regimes because of this attempt to assimilate the Boervolk with the Afrikaners. A portion of those who are the descendants of the Boerevolk have reasserted this designation.[9]

The supporters of the "Boer" designation view the term "Afrikaner" as an artificial political label which usurped their history and culture, turning "Boer" achievements into "Afrikaner" achievements. They feel that the Western-Cape based Afrikaners — whose ancestors did not trek eastwards or northwards — took advantage of the republican Boers' destitution following the Anglo-Boer War and later attempted to assimilate the Boers into a new politically based cultural label as "Afrikaners".[12][13][14]

In contemporary South Africa and due to Broederbond propaganda, Boer and Afrikaner have been used interchangeably despite the fact that the Boers are the smaller segment within the Afrikaner designation as the Afrikaners of Cape Dutch origin are larger. Afrikaner directly translated means "African" and subsequently refers to all Afrikaans speaking people in Africa irrespective of colour or nationality. Boer is the specific ethnic group within the larger Afrikaans speaking population.

The BCVO ('Movement for Christian-National Education') is a federation of 47 Calvinist private schools, primarily in the Free State and the Transvaal, committed to educating Boer children from grade 0 through to 12.[15]

Some local Radio stations promote the ideals of the people identifying with Boer/Afrikaner people, like Radio Rosestad (in Bloemfontein), Overvaal Stereo and Radio Pretoria.

Two territorial areas are being developed as settlement exclusively for Boer/Afrikaners, Orania in the Northern Cape and Kleinfontein near Pretoria.

Participants in the Second Anglo-Boer War