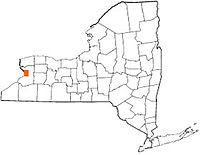 Buffalo, NY shown in red. Lackawanna is a small city, adjacent to Buffalo to the south. On the west are Lake Erie, at the mouth of the Niagara River, and the Province of Ontario, Canada.

The Buffalo Six (known primarily as Lackawanna Six, but also the Lackawanna Cell, or Buffalo Cell) is a group of six Yemeni-American childhood friends who were convicted of providing material support to al-Qaeda, based on the fact they had attended an Al Qaeda training camp in Afghanistan together in the Spring of 2001.

All six are naturalized American citizens.[1]

They traveled to Afghanistan in spring 2001, before the September 11 attacks, while the country was still ruled by the Taliban, who were then giving sanctuary to Osama bin Laden, who in turn used it as a base for al-Qaeda training.[2]

In June 2001, an anonymous two-page handwritten letter was received from an individual ostensibly living in Lackawanna who knew the Yemeni population intimately, It warned "I am very concern. I am an Arab-American... and I cannot give you my name because I fear for my life. Two terrorist [sic] came to Lackawanna... for recruiting the Yemenite youth... the terrorist group... left to Afghanistan to meet... bin Laden and stay in his camp for training", and gave the names of twelve local youths.[1]

The group visited what later became known in the American media as the "al-Farooq terrorist training camp."[3]

In the late summer of 2002, one of the members, Mukhtar al-Bakri, sent an e-mail in which he described his upcoming wedding and another in which he mentioned a "big meal" after the wedding, which is tradition in Islam. The Central Intelligence Agency (CIA), who were monitoring him, sounded the alarm and al-Bakri was arrested by Bahrainian police on the date of his wedding. They found him in his hotel room with his new wife, preparing to consummate his marriage, and stunned at the commando team that now held him at gunpoint.[1][4]

The other five were arrested in Lackawanna, New York, a suburb of Buffalo, New York in September 2002. On September 14, 2002, the Federal Bureau of Investigation (FBI) held a press conference in Buffalo to announce the arrests of five of the local al-Qaeda suspects. The FBI Special Agent in charge of the investigation, Peter Ahearn (At the time head of the FBI's Buffalo Field Office), stated that there was no specific event triggering the arrests, which followed four to eight months of investigations.[3] Later, FBI counterterrorism chief Dale Watson told The New York Times that the bureau's response was that "we are probably 99 percent sure that we can make sure these guys don't do something – if they are planning to do something." Watson paraphrased the President's response as that "under the rules that we were playing under at the time, that's not acceptable. So a conscious decision was made, 'Let's get 'em out of here'".[4]

A close associate of the Lackawanna Six, Jaber A. Elbaneh, never returned to the U.S. after his trip to Afghanistan and in September 2003, the FBI announced a $5 million reward for information leading to his arrest. He escaped from a Yemeni prison in 2006 after joining a successful group prison break and was named as one of 23 people, 12 of them Al-Qaeda members, who escaped on February 3, 2006.

On February 23, 2006 the U.S. FBI confirmed the escape, as they issued a national Press Release naming Elbaneh as one of the first new additions, since inception in 2001, to the FBI Most Wanted Terrorists list.[5]

On May 20, 2007, Elbaneh turned himself in to Yemen authorities on the condition that his prison sentence would not be extended.

Ahmed Hijazi aka Jalal aka Kamal Derwish, who was killed in a car with five others by a Hellfire targeted killing from a CIA Predator in Yemen 2002 November 3, may have been the ringleader/recruiter.[6] He was sought after largely because he could clarify how serious a threat the Buffalo Six were.[4] Hijazi held U.S. citizenship and was also a citizen of an unidentified Middle Eastern country. He was not born in the United States, but resided there for an unknown period of time. With him in the vehicle at the time of his death, was a senior al Qaeda leader, Abu Ali al-Harithi, who is suspected of masterminding the October 2000 attack on the destroyer USS Cole.[citation needed]

An anonymous voice message was being sent to households across Lackawanna, ostensibly from "BioFend", noting that "we believe that the goal of this terrorist cell was to detonate briefcase-sized dirty bombs right here in western New York". When then-Governor Eliot Spitzer had the company dissolved, it was still unclear whether the recordings were meant to lay the groundwork for a financial scam, or were an attempt to "taint the jury pool" by spreading untrue rumors suggesting there had been a violent plan in the works.[1] 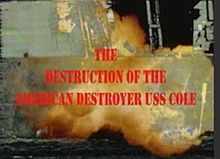 Three members of the Buffalo Six testified at Ali Hamza Al-Bahlul's Guantanamo military commission that they were shown this al-Qaeda produced video of the USS Cole bombing.

In late October 2008 three of the six men testified at Ali Hamza al Bahlul's Guantanamo military commissions.[7][8] Yassein Taher, Sahim Alwan and a third member of the group testified about being shown a two hour jihadist video that celebrated the attack on the USS Cole while they were in al Qaeda guest houses and when they attended the al Farouq training camp. Al Bahlul stands accused of producing the jihadist video. The Buffalo men testified that they were terrified and appalled by the video. According to the Miami Herald Taher and Alwan expected their testimony would be rewarded by being placed in the witness protection program, like the third man whose name was withheld from the Press.

In July 2009, it was reported that prior to sending in 130 federal and local members of the Western New York Joint Terrorism Task Force it was suggested that federal troops be used to capture the suspects.[9][10] At the time, Vice President Dick Cheney and Defense Secretary Donald Rumsfeld felt that the men should be declared enemy combatants and could have been tried by a military tribunal. President Bush rejected this proposal and the arrests proceeded without incident.[9]