The N11 road is a national primary road in Ireland, running for 140 km (87 mi) along the east side of Ireland from Dublin to Wexford.[1] It passes close to Bray, Greystones, Wicklow, Arklow and Gorey and also passes through Enniscorthy, amongst others. Beyond Wexford, the route continues to Rosslare as the N25. The road forms part of European route E01. As of 2009[update] the N11/M11 is of dual carriageway or motorway standard from Dublin as far as Rathnew in County Wicklow, with a further section of motorway bypassing Arklow and Gorey.

The road is a busy commuter route, being the only dual carriageway passing through the south eastern suburbs of Dublin, as well as close to the many commuter towns along the east coast as far south as Gorey. Summer Friday and Sunday evenings also see very heavy traffic as Dubliners decamp to, and return from, their many holiday home locations along the Co. Wicklow and Co. Wexford coastlines.

Route out of (and into) Dublin

The N11 commences where it meets the N4 on the north end of O'Connell Bridge in Dublin city centre. The route proceeds along D'Olier Street, College Street (and in the opposite direction, Westmoreland Street). The route continues around College Green and Grafton Street (and in the other direction, Suffolk Street, Church Lane and Dame Street). From here, the route continues out of the city via Nassau Street, Kildare Street, North side of St. Stephen's Green, Merrion Row, Baggot Street Lower, Pembroke Street Lower, Fitzwilliam Square West and Pembroke Street Upper. This route section in the other direction (into the city centre) runs via Leeson Street Lower (see thumbnail), East and North sides of St. Stephen's Green, and Dawson Street. The N11 runs in both directions along Leeson Street Lower after the junction with Pembroke Street. Having crossed the Grand Canal the route divides again for a portion of Leeson Street Upper, with outbound traffic proceeding via Sussex Road. The route continues via Morehampton Road and Donnybrook Road, through Donnybrook, with the route becoming dual carriageway at Donnybrook Church, which marks the beginning of the Stillorgan Road. 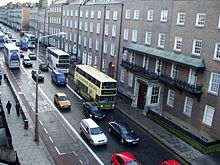 The Stillorgan Road (colloquially known as the Stillorgan dualler) brings the road past Belfield, where University College Dublin is located (and accessed from a grade-separated interchange on the dual carriageway - the first full interchange built in Ireland) and onwards past Mount Merrion towards Stillorgan village. North of Stillorgan, the N31 to Dun Laoghaire port commences, leaving the N11 to the east via Mount Merrion Avenue. Stillorgan village is bypassed to the east by the N11 dual carriageway, which proceeds southeast through Galloping Green, bypassing Leopardstown and Foxrock to the east also. Then the Cabinteely Bypass and part of the Bray Road bring the N11 via Loughlinstown and Shanganagh to north of Shankill, where the M11 motorway commences as the Bray/Shankill Bypass.

Part of the N11, from Leeson Street to the Loughlinstown roundabout, is provided with a Quality Bus Corridor (QBC) bus lane. Dublin Bus's flagship 46a route operates over this stretch of road as far as Foxrock Church. (A section of this QBC running contraflow on Leeson St can be see in the thumbnail, right). 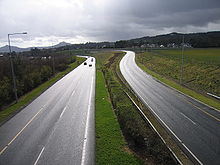 Along the Shankill Bypass, the M11 is joined by the Dublin's M50 motorway ring road, which terminates at a major junction along the M11, opened in June 2005 after many years of planning. This link allows motorists to drive on continuous motorway and dual carriageway all the way from Rathnew, Co. Wicklow to various destinations around the island via the M50 and the national roads it serves. These include Portlaoise via the N7/M7, Newry, County Down via the M1/N1/A1, north of Ashbourne, County Meath via the N2, Galway, County Galway via the M4/N4/M6, and Mullingar, County Westmeath via the N4/M4.

Traffic proceeding north on the M11 is given a choice to stay on the main carriageway (which becomes the M50), or take the exit at what is junction 17 on the M50, in order to stay on the M11, following the N11 into the city centre. Traffic on the N11 inside Dublin proper is expected to ease due to traffic being given other route options before entering the city.

Route through Wicklow and Wexford

West of Bray in County Wicklow, the motorway ends, with the N11 continuing south as dual carriageway through the Glen of the Downs. The upgrading of the road to dual carriageway through the Glen of the Downs was controversial, as the valley is a wooded area. Expanding the road resulted in the removal of some woodland. A campaign of protests, mainly by environmental activists, led to long delays in the construction of this section of road, but the work was eventually completed with a minimal disruption to the woodland. After Glen of the Downs the N11/M11 continues south to bypass Kilpedder, Newtownmountkennedy, Ashford and Rathnew. The dual carriageway/motorway ends a short distance past Rathnew. The route continues as single carriageway south towards Arklow. Arklow is bypassed by a dual-carriageway route opened in January 1999 and re-designated as motorway in August 2009. 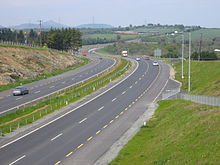 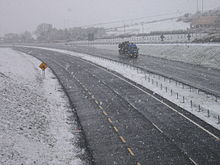 Just north of Inch, the N11 enters County Wexford. The route continues south, bypassing Gorey. This section was also re-designated as motorway from 28 August 2009. The former N11 road between Arklow and Gorey is now signposted as the R772 regional road. Clogh, Camolin, and Ferns lie along the route south towards Enniscorthy. At Ballynahallin, 5 km North of Enniscorthy, the N80 from Tullamore joins the N11. At Enniscorthy itself, the N30 from New Ross joins the N11. South of here, the N11 passes through Oilgate, County Wexford, continuing south through Ferrycarrig, and crossing the River Slaney to terminate on a bypass west of Wexford where it meets the N25 from Waterford at the Belmont roundabout.

The N11 has been gradually upgraded from single to dual carriageway standard from the 1950s to the present, with improvements taking place at an accelerated pace in recent years. The first short stretch of dual carriageway on the road, and indeed the first stretch of dual carriageway anywhere in Ireland, was built in the 1950s between the Stillorgan Road/Newtownpark Avenue junction and Foxrock Church (this stretch was substantially widened around the turn of the millennium). Subsequent short stretches of dual carriageway, at Loughlinstown, between Bray and Kilpedder, and from Donnybrook to Stillorgan were constructed during the early to mid 1970s, this phase ending with the opening of the Stillorgan bypass in October 1979. Since that time, these sections have been joined up through further improvements.

A further project is in planning to provide a 20 km dual carriageway bypass around Enniscorthy and also connecting the N11 to the N30. Currently, the passage of traffic through the town is restricted by the narrow streets and the two bridges which connect the town across the River Slaney. The village of Oilgate may yet become a bottleneck, as there is a traffic calming system in operation.

On 30 September 2008, the Department of Transport proposed that the dual carriageway sections from Ashford to south of Rathnew, and from north of Arklow to south of Gorey, be reclassified as motorway under the Roads Act 2007.[3] The Statutory Instrument for these reclassifications was passed on 2 July 2009 and came into effect on 28 August 2009. There are now three sections of M11 motorway forming part of the N11 route.

It is proposed that the Enniscorthy bypass will be a motorway.[4] Construction is expected to begin in 2011.

Initial planning is underway to bypass Oilgate by building a new N11 from the end of the Enniscorthy bypass to the N25 near Wexford Town. A new section of N25 will complete the up-grade of Euro-route 01 between the M50 and Rosslare Harbour.[5]