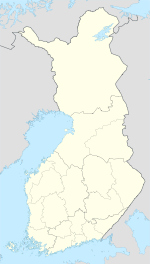 As of 2008, Finland's nuclear power program has four nuclear reactors in two power plants. The first of these came into operation in 1977. In 2007 they provided 28.4% of Finland's electricity.[1] They are among the world's most productive, with average capacity factors of 94% in the 1990s.[2] A fifth nuclear reactor is under construction, scheduled to go online in 2013.

Located in Loviisa, the plant comprises two VVER-440 pressurized water reactors built by Soviet Atomenergoexport, but fitted with Western instrumentation, containment structures and control systems. The plant is owned by Fortum. Electrical production started in 1977 and 1980, with the plants now producing 488 MWe each. On 26 July 2007 new licenses were granted to Fortum to operate the units until 2027 and 2030, conditional on safety reviews before 2015 and 2023.[3]

The third Olkiluoto reactor is the first European Pressurized Reactor (EPR). Scheduled to go on line in 2013 at fixed price of €3 billion ($4.1 billion),[4] it will have a power output of 1,600 MWe. An 800 MW undersea transmission line from near Olkiluoto to Sweden is scheduled to be completed in 2011, allowing additional power import and export.[2]

The Olkiluoto-3 reactor is at least 37 months behind schedule after 42 months of construction, and some 50% over budget.[5]

There is a small research reactor located in Otaniemi, Espoo; a TRIGA Mark II, built in 1962. Owned by the Technical Research Centre of Finland, it has a power output of 250 kW (peak power 1,000 kW) and is mainly used in boron neutron capture therapy treatment and research.

Finland's Radiation and Nuclear Safety Authority (Finnish: Säteilyturvakeskus, STUK) is responsible for regulation and inspection. It operates under the Council of State (effectively the government), which licenses major nuclear facilities. STUK is under the Ministry of Social Affairs and Health, and is assisted by an Advisory Committee on Nuclear Safety in major matters.[2]

A cabinet decision in 2002 to allow the construction of a fifth nuclear reactor was accepted in parliament. Economic, energy security and environmental grounds were given as reasons for the decision. While hydroelectricity is curtailed in dry years (range 9,455–14,865 GW·h 1990–2006), nuclear energy supplies near-constant amounts of energy, and studies showed that nuclear energy was the cheapest option for Finland.[citation needed] The vote was seen as very significant for nuclear energy policy in that it was the first decision to build a new nuclear power plant in Western Europe for more than a decade. Areva and Siemens are building the new reactor at the Olkiluoto plant.

Teollisuuden Voima (TVO) ordered the 1600 MW nuclear reactor from French Areva and German Siemens in 2003 with the fixed price of €3 billion and scheduled hand over time in the year 2009.[6] In June 2010 the major newspaper Helsingin Sanomat in Finland wrote that Olkiluoto 3 start up will take place in the beginning of 2013 and will take several months.[7]

According to World Nuclear Association 2008: ” Experience has shown that each year of additional delay in the construction of a nuclear power plants adds another estimated $1 billion to the cost”.[8] According to Greenpeace the renewable energy alternative was dropped in Finland as it was half a billion euros more expensive than the presented nuclear plant calculations. The environmental organization estimated the final nuclear power plant to be at least 2.5 billion € more expensive than the renewable alternative would have been.[9]

Siemens sold its 34% share of the shared company Areva NP to Areva in January 2009 with €2.1 billion.[10] The European Union started the cartel examination of nuclear cooperation of Areva and Siemens in June 2010. Areva NP was named previously Framatome.[11]

On 21 April 2010, the Government of Finland, notably with the Green League represented in it, decided to grant permits for construction of the sixth and seventh commercial reactors to Teollisuuden Voima and Fennovoima, a subsidiary of E.ON. A fourth reactor would be built accordingly at Olkiluoto by TVO. The application by Fortum to build a new reactor at Loviisa was declined.[12] The Finnish Parliament approved the building permits on 1 July 2010.[13][14][15]

In October 2011, Fennovoima announced that it had chosen Pyhäjoki, in northern Finland, as the site for the country's third nuclear power plant. Construction is expected to start in 2015.[16]

Spent fuel from the Loviisa Nuclear Power Plant was initially shipped to the Soviet Union for reprocessing. After news of the 1957 Kyshtym disaster at the Mayak nuclear fuel reprocessing plant was made public this option was no longer seen as politically acceptable. The Finnish Nuclear Energy Act was amended in 1994 so that all nuclear waste produced in Finland must be disposed of in Finland.[17] All spent fuel would be permanently buried in bedrock. Olkiluoto was selected in 2000 to become the site of underground disposal of all of Finland's spent nuclear fuel. 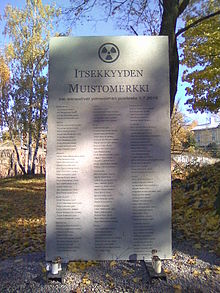 Greenpeace carved a "memorial of selfishness" listing the names of all Finnish parliamentarians who voted for the new nuclear power reactors in 2010.

The major parliamentary political parties of Finland consider support or opposition to nuclear power an issue that is left to each individual MP to decide. National Coalition, the Center Party and Social Democrats include both supporters and opponents of nuclear power. Only National Coalition has included the supportive stance in their party platform,[18] but Center Party has expressed support for building more nuclear power plants[19] and Social Democrats have not stated a party-wide view. Most small parliamentary parties have expressed opposition in their party platform: The Green League and Left Alliance explicitly oppose nuclear power, along with Swedish People's Party and True Finns. The exception are the Christian Democrats, who have not expressed a view.

The Finnish public is among the most nuclear power-friendly nations in the EU: in a 2008 survey, production of electricity by means of nuclear power was supported by 61%, clearly above the EU average of 44%.[20]