Sweden has an energy policy focused on hydroelectricity, which has been supplemented by nuclear power starting in 1965.

The country began research into nuclear energy in 1947 with the establishment of the Atomic Energy Research Organization. In 1964, the country built its first small heavy water reactor. The government decided to use hydropower and supplement it with nuclear energy to avoid falling victim to the perennial volatility in oil prices. Six nuclear reactors began commercial service in both the 1970s and 1980s, with one unit closed in 1999 and another in 2005.

Sweden currently has three operational nuclear power plants, with ten operational nuclear reactors, which produce about 45% of the country's electricity. The nation's largest power station, Ringhals Nuclear Power Plant, has four reactors and generates about a fifth of Sweden's annual electricity consumption.[1] The power plants in Forsmark and Oskarshamn each have three reactors.

Sweden formerly had a nuclear phase-out policy, aiming to end nuclear power generation in Sweden by 2010. On 5 February 2009, the Swedish Government announced an agreement allowing for the replacement of existing reactors, effectively ending the phase-out policy. 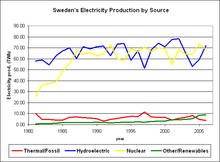 Electricity production in Sweden by type

Electricity production in Sweden is dominated by nuclear power and hydroelectricity which currently make about equal contributions to energy production, for which demand has remained fairly constant since 1990.

On 1 May 1969, a prototype nuclear cogeneration plant outside Stockholm, Ågestaverket (R3) suffered an incident in which secondary cooling water flooded through a broken valve and caused a number of electrical problems in the plant, resulting in a 4-day shutdown.[2]

R1, R3, and particularly the never finished R4 project at Marviken were heavy water reactors which could have been used to produce weapons grade plutonium for Swedish nuclear warheads. The Swedish nuclear weapons program was eventually shut down, however, and Sweden signed the nuclear non-proliferation treaty in 1968.[3]

After the partial meltdown at the Three Mile Island Nuclear Generating Station (United States) in 1979, there was a referendum in Sweden about the future of nuclear power there. As a result of this, the Swedish parliament decided in 1980 that no further nuclear power plants should be built, and that a nuclear power phase-out should be completed by 2010. Some observers have condemned the referendum as flawed because people could only vote "NO to nuclear", although three options were basically a harder or a softer "NO".[citation needed]

After the 1986 Chernobyl accident in Ukraine, the question of security of nuclear energy was again raised. In 1997[verification needed] the Riksdag, the Swedish parliament, decided to shut down one of the reactors at Barsebäck by 1 July 1998 and the second before 1 July 2001, although under the condition that their energy production would be compensated. The next conservative government tried to cancel the phase-out, but, after protests, did not cancel it but instead decided to extend the time limit to 2010. At Barsebäck, block 1 was shut down on 30 November 1999 and block 2 on 1 June 2005.

In August 2006 three of Sweden's ten nuclear reactors were shut down due to safety concerns following an incident at Forsmark Nuclear Power Plant, in which two out of four emergency power generators failed causing a power shortage. Cooling systems however worked and shutdown was successful without incident.[4] Another reactor in Forsmark and a fifth at Ringhals nuclear power plant have been offline due to planned maintenance work. With five of its ten reactors down, Sweden's power generation capacity is down by almost a fifth. wikinews:Swedish nuclear reactors shut down over safety concerns

In 2006 the Centre Party of Sweden, an opposition party that supported the phase-out, announced that it is dropping its opposition to nuclear power, at least for the time being, claiming that it is unrealistic to expect the phase-out in the short term. It said it would now support the stance of the other opposition parties in Alliance for Sweden, which were considerably more pro-nuclear than the then Social Democratic government.[5]

On 17 June 2010, the Swedish Parliament adopted a decision allowing the replacement of the existing reactors with new nuclear reactors, starting from 1 January 2011.[6]

The nuclear energy phase-out is controversial in Sweden. The energy production of the remaining nuclear power plants has been considerably increased in recent years to compensate for the Barsebäck shut-down.

In May 2005, a poll of residents living around Barsebäck found that 94% wanted it to stay. The subsequent leak of radioactive water from the nuclear waste store in Forsmark did not lead to a major change in public opinion.[7] According to a poll of January 2008, as many as 48% of the Swedes were in favour of building new nuclear reactors, 39% were opposed and 13% were undecided. However, the 2011 Fukushima Daiichi nuclear disaster in Japan reversed prior support of nuclear power, with polls showing that 64% of Swedes opposed new reactors while 27% supported them.[8]

Prior public support for nuclear power stood in contrast to the stances of the major political parties in Sweden, the only one of which in favour of building new reactors is the Liberal party.[9]

The advisory referendum on nuclear power (1980)

As a consequence of the debate following the Three Mile Island accident, an advisory referendum was held in Sweden on 23 March 1980. Swedish voters were given three choices:

"Nuclear power shall be phased out, while taking consideration of the need for electric power for the maintenance of employment and welfare. In order to, among other things, lessen the dependency on oil, and while waiting for the availability of renewable energy sources, at most 12 of the reactors shall be used, be they existing or under construction. No further expansion is to take place. The order in which the reactors will be taken out of production will be determined by security concerns."

There was no text on the reverse side of the ballot.

"Energy conservation shall be pursued vigorously and stimulated further. The weakest groups in society shall be protected. Measures shall be taken to control consumption of electricity, e.g. prohibiting direct electric heating in the construction of new permanent housing.

Research and development of renewable energy sources shall be pursued under the leadership of the community [government].

Environmental and safety improving measures are to be carried out. A special safety study is to be made at each reactor. To allow insight by the citizens a special security committee with local ties is appointed at each nuclear power plant.

Production of electricity from oil and coal is to be avoided.

The community [government] shall have the main responsibility for production and distribution of electric power. Nuclear power plants and other future installations for the production of significant electric power shall be owned by the state and by the municipalities. Excessive profits from hydroelectric power generation are reduced by taxation."

The last point was controversial and the most important reason why the Moderate Party would not consider supporting "Linje 2".

"NO to continued expansion of nuclear power.

Phasing out of the currently operating six reactors with at most ten years. A conservation plan for reduced dependency on oil is to be carried through on the basis of:

The operating reactors are subjected to heightened safety requirements. Non-fueled reactors will never be put into production.

Uranium mining is to be prohibited in our country."

The reverse side of the ballot read:

"If ongoing or future safety analyses demand it, immediate shutdown is to take place.
The work against nuclear proliferation and nuclear weapons shall be intensified. No fuel enrichment is permitted and the export of reactors and reactor technology is to cease.
Employment will increase through alternative energy production, more effective conservation of energy and refinement of raw materials."

Sweden has a well-developed nuclear waste management policy. Low-level waste is currently stored at the reactor sites or destroyed at Studsvik. The country has dedicated a ship, M/S Sigyn, to move waste from power plants to repositories. Sweden has also constructed a permanent underground repository, SFR, final repository for short-lived radioactive waste, with a capacity of 63,000 cubic meters for intermediate and low-level waste. A central interim storage facility for spent nuclear fuel , Clab, is located near Oskarshamn. The government has also identified two potential candidates for burial of additional waste (high-level), Oskarshamn and Osthammar.[11]