Inauguration Day 2009 on the west steps of the U.S. Capitol. 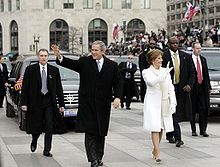 The only inauguration element mandated by the United States Constitution is that the President make an oath or affirmation before that person can "enter on the Execution" of the office of the presidency. However, over the years, various traditions have arisen that have expanded the inauguration from a simple oath-taking ceremony to a day-long event, including parades, speeches, and balls.

This day, now known as Inauguration Day, was on March 4 from 1793 until 1933. Since then, Inauguration Day has occurred on January 20 (the 1933 ratification of the Twentieth Amendment changed the start date of the term).

From the presidency of Andrew Jackson through Jimmy Carter, the primary Inauguration Day ceremony took place on the Capitol's East Portico.[1] Since the 1981 inauguration of Ronald Reagan, the ceremony has been held at the Capitol's West Front. The inaugurations of William Howard Taft in 1909 and Reagan in 1985 were moved indoors at the Capitol due to cold weather. The War of 1812 and World War II caused two inaugurations to be held at other locations in Washington, D.C..

The inauguration for the first U.S. president, George Washington, was held on April 30, 1789, at Federal Hall in New York City[2] where he was sworn in by Robert Livingston, the Chancellor of the State of New York.[3] In 1801, Thomas Jefferson became the first to be sworn in as president in Washington, D.C., which only officially became the federal capital on June 11, 1800.[4] Inauguration day was originally on March 4, four months after election day, but this was changed to noon on January 20 by the Twentieth Amendment in 1933.[4]

The inaugural celebrations usually last ten days, from five days before the inauguration to five days after. However, in 1973, the celebrations marking Richard Nixon's second inauguration were marred by the passing of former president Lyndon B. Johnson two days after the inauguration. The celebrations came to an end as Washington began preparations for the state funeral for Johnson. Because of the construction work on the center steps of the East Front, Johnson's casket was taken up the Senate wing steps of the Capitol when taken into the rotunda to lie in state.[5] When it was brought out, it came out through the House wing steps of the Capitol.[5]

Inauguration Day is a Federal holiday observed only by federal employees who work in the District of Columbia; Montgomery and Prince George's Counties in Maryland; Arlington and Fairfax Counties in Virginia, and the cities of Alexandria and Fairfax in Virginia, and who are regularly scheduled to perform non-overtime work on Inauguration Day. There is no in-lieu-of holiday for employees and students who are not regularly scheduled to work or attend school on Inauguration Day. The primary reason for the holiday is to relieve traffic congestion that occurs during this major event. 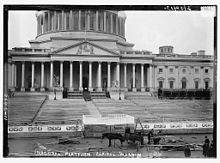 Inauguration platform under construction for Woodrow Wilson's first inauguration in 1913

Since 1901, all inaugural ceremonies at the United States Capitol have been organized by the Congressional Joint Committee on Inaugural Ceremonies.[6]

The Presidential Inaugural Committee is the legal entity which raises and distributes funds for events other than the ceremony such as the balls and parade.[7]

All but one of the inaugural ceremonies were held at the building housing the United States Congress. Washington gave his first address at Federal Hall in New York City and his second address in Congress Hall in Philadelphia. Adams also gave his in Congress Hall in Philadelphia. Jefferson gave both of his addresses at the United States Capitol in Washington, D.C. and all addresses since then have been given there, except for Franklin D. Roosevelt's fourth address, which he gave at the White House. Depending on the weather, the ceremonial swearing-in is held outside or inside of the Capitol building. 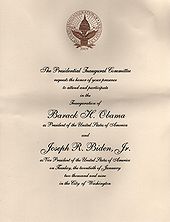 Invitation to the January 20, 2009 inauguration of President Barack Obama

Inaugural ceremonies have been held on five different calendar dates in the year: April 30, March 4, March 5, January 20, January 21. Washington gave his first address on April 30, 1789 and his second one on March 4, 1793, which was the commencement date for presidential terms. This March 4 date was changed to January 20 by the Twentieth Amendment to the United States Constitution.

From the years 1793 to 1933, the addresses were given on March 4 with only four exceptions. Because March 4 fell on a Sunday in each of their respective inaugural years, Monroe, Taylor, Hayes and Wilson each gave an address on Monday, March 5. Since 1937, addresses have been given on January 20 with only two exceptions (other than following a premature end to the Presidential term). Presidents Eisenhower and Reagan each gave an address on Monday, January 21. The next inauguration day that will fall on a Sunday is January 20, 2013.

In addition to the public, the attendees at the ceremony generally include Members of Congress, Supreme Court justices, high-ranking military officers, former presidents, living Medal of Honor recipients, and other dignitaries.

The outgoing president attends the inauguration, barring those cases where succession was due to his death. There have been four exceptions:

Gerald Ford had no inauguration, but rather a swearing-in ceremony. Richard Nixon left Washington, D.C. before his resignation took effect and did not attend the ceremony.

Main article: Oath of office of the President of the United States

Immediately after the vice-presidential oath, the United States Marine Band will perform four ruffles and flourishes, followed by Hail, Columbia.

According to Washington Irving's biography of George Washington, in the first inauguration President Washington added the words "so help me God" after accepting the oath. This is confirmed by Donald R. Kennon, Chief Historian, United States Capitol Historical Society.[9] However, the only contemporaneous source that fully reproduced Washington's oath completely lacks the religious codicil.[10] The first newspaper report that actually described the exact words used in an oath of office, Chester Arthur's in 1881,[11] repeated the "query-response" method where the words, "so help me God" were a personal prayer, not a part of the constitutional oath. The time of adoption of the current procedure, where both the Chief Justice and the President speak the oath, is unknown.

There is no requirement that any book, or in particular a book of sacred text, be used to administer the oath, and none is mentioned in the Constitution. With the use of the Bible being customary for oaths, at least in the 18th and 19th centuries, a Bible was generally used. Several Presidents were sworn in on the George Washington Inaugural Bible.[citation needed] On some occasions, the particular passage to which it was opened has been recorded, as below. Only one president, Franklin Pierce, is definitely known to have affirmed rather than sworn; there are conflicting reports concerning Herbert Hoover, but the use of a Bible is recorded and suggests that he swore in the usual fashion. Barack Obama used the Lincoln Bible for his swearing in.[12]

The presidential oath has been administered by 15 Chief Justices, one Associate Justice, and two New York state judges.

Immediately after the presidential oath, the United States Marine Band will perform four ruffles and flourishes, followed by Hail to the Chief, while simultaneously, a 21-gun salute is fired using artillery pieces from the Presidential Guns Salute Battery, 3d United States Infantry Regiment "The Old Guard" located in Taft Park, north of the Capitol. The actual gun salute begins with the first ruffle and flourish, and 'run long' (i.e. the salute concludes after Hail to the Chief has ended).

Newly sworn-in presidents usually give a speech referred to as an inaugural address. Until William McKinley's first inaugural address in 1897, the president elect traditionally gave the address before taking the oath; McKinley requested the change so that he could reiterate the words of the oath at the close of his address. Four presidents gave no address: Tyler, Fillmore, Andrew Johnson, and Arthur. In each of these cases, the incoming President was succeeding a President who had died in office, and was not elected as president in the next election. Gerald Ford addressed the nation via broadcast after taking the oath, but he characterized his speech as "Not an inaugural address, not a fireside chat, not a campaign speech—just a little straight talk among friends."[13] Fifty-four addresses have been given by thirty-seven presidents. George Washington's second address was the shortest (135 words), and William Henry Harrison delivered the longest (8,495 words).

Since 1937, the ceremony has incorporated two or more prayers. Musical works and poetry readings have been included on occasion.[14]

Since 1953, the president and vice president have been guests of honor at a luncheon held by the United States Congress immediately following the inaugural ceremony. Other than at State of the Union addresses, the Red Mass, and state funerals, it is the only time the president, vice president, and both houses of Congress congregate in the same location.

The Inaugural Parade on Pennsylvania Avenue passes the Presidential reviewing stand in front of the White House in January 2005.

Since Thomas Jefferson's second inaugural on March 4, 1805, it has become tradition for the president to parade down Pennsylvania Avenue from the Capitol to the White House. The only president not to parade down Pennsylvania Avenue was Ronald Reagan in his second inauguration in 1985, due to freezing cold temperatures made dangerous by high winds. Reagan paraded down Pennsylvania Avenue during his first inauguration, in 1981, amidst the celebrations that broke out across the country because of news just minutes into his term that the 52 American hostages held in Iran for the previous 444 days had been released. In 1977, Jimmy Carter walked from the Capitol to the White House, although for security reasons, subsequent presidents have only walked a part of the way.

A tradition of a national prayer service, usually the day after the inauguration, dates back to George Washington and since Franklin Delano Roosevelt, the prayer service has been held at the Washington National Cathedral.[15]

Beginning with George Washington, there has been a traditional association with Inauguration festivities and the production of a presidential medal. With the District of Columbia attracting thousands of attendees for inauguration, presidential medals were an inexpensive souvenir for the tourists to remember the occasion. However, the once-simple trinket turned into an official presidential election memento. In 1901, the first Inauguration Committee on Medals and Badges was established as part of the official Inauguration Committee for the re-election of President McKinley. The Committee saw official medals as a way to raise funding for the festivities. Gold medals were to be produced as gifts for the President, Vice President, and Committee Chair; Silver medals were to be created and distributed among Inauguration Committee members; and bronze medals would be for sale for public consumption. McKinley's medal was simple with his portrait on one side and writing on the other side.[16]

Unlike his predecessor, when Theodore Roosevelt took his oath of office in 1905, he found the previous presidential medal unacceptable. As an art lover and admirer of the ancient Greek high-relief coins, Roosevelt wanted more than a simple medal—he wanted a work of art. To achieve this goal, the President hired Augustus Saint-Gaudens, a famous American sculptor, to design and create his inauguration medal. Saint-Gaudens's obsession of perfection resulted in a forestalled release and the medals were distributed after the actual inauguration. However, President Roosevelt was very pleased with the result.

Saint-Gaudens' practice of creating a portrait sculpture of the newly elected president is still used today in presidential medal creation. After sitting for the sculptor, the clay sketch is turned into a life mask and plaster model. Finishing touches are added and an epoxy cast is created, which is used to produce the die cuts. The die cuts are then used to strike the President's portrait on each medal. The most recent Presidential Inauguration Medal released was for President Obama in 2009.[17]

The Smithsonian Institute and The George Washington University hold the two most complete collections of presidential medals in the United States.