Metropolitan Police Department of the District of Columbia

Metropolitan Police Department of the District of Columbia
Not to be confused with United States Capitol Police. 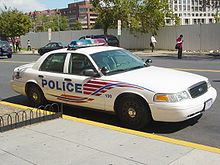 The Metropolitan Police Department, also known as the DC Police, DCPD, MPD, and MPDC is the municipal police force in Washington, D.C. It is one of the ten largest police forces within the United States.[1]

The modern-day Metropolitan Police Department was officially formed on August 6, 1861, in accordance with the personal wishes of President Abraham Lincoln, who had taken a personal interest in the establishment of regular police for the nation's capital.[2]

The department's duties include the provision of police services to the city and its inhabitants and to supplement the various uniformed federal law enforcement agencies, primarily the United States Secret Service, United States Park Police, Federal Bureau of Investigation Police, and United States Capitol Police in the city. Additionally, due to its location within an independent federal city, the department must exercise the standard functions of a local police force and also handle certain activities normally considered within the domain of a county police or state police agency such as a sex offender registry.

The current Chief of Police is Cathy L. Lanier, who began her career as a Metropolitan Police patrol officer, and is the first female chief of the department. She assumed her post on January 2, 2007, replacing Charles H. Ramsey, who had served under former Washington, D.C., Mayor Anthony A. Williams and is now the commissioner of the Philadelphia Police Department.

There are eleven ranks in the Metropolitan Police Department:

The syndicated CBS television series The District dramatized the daily goings on of the police department.

In the 1997 film Murder at 1600, an MPD homicide detective (portrayed by Wesley Snipes) investigates a murder at The White House.

The TV series NCIS has several references to Metropolitan PD, with several interactions with local law enforcement and NCIS.

The 2009 season of the TV series 24 on Fox starring Kiefer Sutherland has featured the MPD in a few episodes which centers around a terrorist plot against the White House. The MPDC are shown working with the FBI and other major government agencies.

In the movie True Lies, Arnold Schwarzenegger knocks a MPD Mounted Unit to the ground and confiscates his horse for the pursuit of a terrorist.

In the Film The Invasion Nicole Kidman's character is caught in an altercation with an infected MPD officer.

Since the establishment of the Metropolitan Police Department, 121 officers have died in the line of duty.[6]

The cause of deaths are as follows: