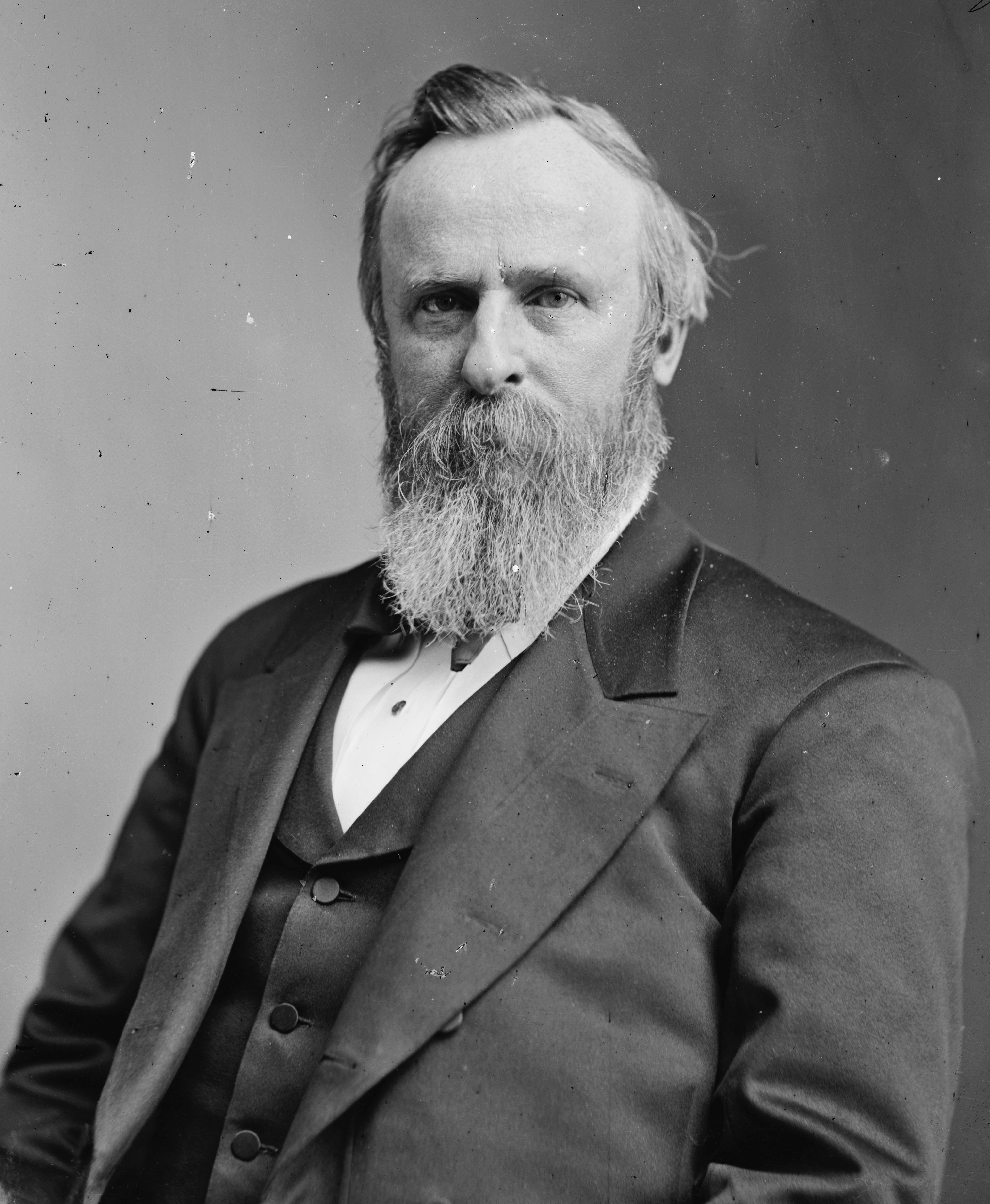 Rutherford Birchard Hayes (October 4, 1822ndash January 17, 1893) was an American politician, lawyer, military leader and the nineteenth (1877&ndash;1881). Hayes was elected President by one electoral vote after the highly disputed election of 1876. Losing the popular vote to his opponent, , Hayes was the only president whose election was decided by a congressional commission.

Hayes was born in , on October 4, 1822. His parents were Rutherford Hayes (January 4, 1787 ndash July 20, 1822 ) and Sophia Birchard (April 15, 1792 ndash October 30, 1866 ). His father, a storekeeper descended from Scottish immigrant to Connecticut George Hayes (1654-1725),Fact|date=March 2008 died ten weeks before his birth. An uncle, Sardis Birchard, lived with the family and served as Hayes' guardian. Birchard was close to him throughout his life and became a father figure to him.

Hayes attended the common schools and the Methodist Academy in Norwalk. He graduated from in in August 1842 at the top of his class. He was an honorary member of fraternity, though he had already graduated after the Fraternity Chapter was Chartered. After briefly reading the law in Columbus, he graduated in 2 years from in January 1845. He was admitted to the bar on May 10, 1845, and commenced practice in Lower Sandusky (now Fremont). After dissolving the partnership in Fremont in 1849, he moved to Cincinnati and resumed the practice of law.

On December 30, 1852, Hayes married Lucy Ware Webb. In 1856, he was nominated for but declined a municipal judgeship, but in 1858 accepted appointment as Cincinnati city solicitor by the city council and won election outright to that position in 1859, losing a reelection bid in 1860.

Upon moving to Cincinnati Hayes had become a member of a prominent social organization, the Cincinnati Literary Club, whose members included and Edward Noyes among others, and upon outbreak of the Civil War the Literary Club made a military company. Appointed a major in the Twenty-third Ohio Regiment by Ohio Governor William Dennison Jr., he originally served as regimental judge-advocate but then was promoted to Lieutenant Colonel and proved competent enough at field command that by August 1862 he had been promoted to and soon after received command of his original regiment after being wounded in action. Though other presidents served in the Civil War, Hayes was the only one that was wounded. He was wounded four times.

Brevetted to Brigadier General in December 1862, he commanded the First Brigade of the Kanawha Division of the and turned back several raids. In 1864, Hayes showed particular gallantry in spearheading a frontal assault and temporarily taking command from at the savage and continued with Crook on to Charleston. Hayes continued commanding his Brigade during the , participating in such major battles as the , the , and the . At the end of the Shenandoah campaign, Hayes was promoted to Brigadier General in October 1864 and brevetted Major General. Hayes had been wounded three more times and had four horses shot from under him during his campaigning. [ [http://query.nytimes.com/mem/archive-free/pdf?_r=1&res=9B02E1D61331E033A2575BC1A9679C94629ED7CF Ex-President Hayes Dead; Neuralgia of the Heart the Cause. He Was Stricken Last Saturday at the Home of His Son in Cleveland - Taken Home Ill, but Expected to Recover - Obituary Sketch] , "The New York Times", January 18, 1893. Retrieved on November 30, 2007.]

It was during his command of the 23rd Regiment of the Ohio Volunteer Infantry that Hayes met William McKinley Jr., who would later become the 25th President of the United States. Hayes promoted McKinley twice under his military command, including once for an act of bravery at Antietam. During Hayes' first Ohio gubernatorial race, McKinley engaged in political campaigning and rallying for Hayes' election by "making speeches in the Canton area". [ [http://www.ohiohistory.org/onlinedoc/ohgovernment/governors/mckinley.html Ohio Historical Society | Ohio Governors ] ] Later, as Governor of Ohio, Hayes provided political support for his fellow Republican and Ohioian during McKinley's bid for congressional election. Hayes was arguably one of the strongest political supporters underlying McKinley's military and political successes.

Hayes began political life as a Whig but in 1853 joined the party as a delegate nominating for Governor of Ohio.

While still in the Shenandoah in 1864, Hayes received the Republican nomination to Congress from Cincinnati. Hayes refused to campaign, stating "I have other business just now. Any man who would leave the army at this time to electioneer for Congress ought to be scalped." Despite this, Hayes was elected and served in the Thirty-ninth and again to the Fortieth Congresses and served from March 4, 1865, to July 20, 1867, when he resigned, having been nominated for . Through the powerful voice of his friend and Civil War subordinate 's "Ohio State Journal" (one of the state's most influential newspapers), Hayes won the election and served as governor from 1868 to 1872. He was an unsuccessful candidate in 1872 for election to the Forty-third Congress, and had planned to retire from public life but was drafted by the Republican convention in 1875 to run for governor again and served from January 1876 to March 2, 1877. Hayes received national notice for leading a Republican sweep of a previously Democratic Ohio government.

A nominee ( had led the previous six ballots) by his convention, Hayes became president after the tumultuous, scandal-ridden years of the Grant administration. He had a reputation for honesty dating back to his Civil War years. Hayes was quite famous for his ability not to offend anyone. Henry C. Adams, a prominent political journalist and Washington insider, asserted that Hayes was "a third rate nonentity, whose only recommendation is that he is obnoxious to no one." Nevertheless, his opponent in the presidential election, Democrat , was the favorite to win the presidential election and, in fact, won the popular vote by about 250,000 votes (with about 8.5 million voters in total).

Four states' votes were contested. In order to win, the candidates had to muster 185 votes: Tilden was short just one, with 184 votes, Hayes had 165, with 20 votes representing the four states which were contested. To make matters worse, three of these states (, , and ) were in the South, which was still under military occupation (the fourth was ). Additionally, historians note, the election was not fair because of the improper fraud and intimidation perpetrated from both sides. A popular phrase of the day called it an election without "a free ballot and a fair count." For the next four years, Democrats would refer to Hayes as "Rutherfraud B. Hayes" for his allegedly illegitimate election, as he had lost the popular vote by roughly 250,000 votes.

To peacefully decide the results of the election, the two houses of Congress set up the bi-partisan Electoral Commission to investigate and decide upon the actual winner. The commission consisted of 15 members: five from the House, five from the Senate and five from the Supreme Court. In total, the Commission consisted of 7 Democrats, 7 Republicans and Independent Justice David Davis, who upon being elected to the senate resigned. Joseph P. Bradley, a Supreme Court Justice, took his place. Bradley, however, was a Republican and thus the ruling followed party lines: 8 to 7 voted for Hayes winning in all of the contested 20 electoral votes.

Key Ohio Republicans like and the Democrats, however, agreed at a Washington hotel on the . Southern Democrats were given assurances, in the , that if Hayes became president, he would pull federal troops out of the South and end Reconstruction. An agreement was made between them and the Republicans: if Hayes' cabinet consisted of at least one Southerner and he withdrew all Union troops from the South, then he would become President. This agreement restored local control over the Southern states, and ended national control over the state and local organs of government in the former Conferedate states.

Because March 4, 1877 was a Sunday, Hayes took the oath of office in the Red Room of the on March 3, becoming the first president to take the in the White House. This ceremony was held in secret, because the previous year's election had been so bitterly divisive that outgoing President Grant feared an insurrection by Tilden's supporters and wanted to ensure that any Democratic attempt to hijack the public inauguration ceremony would fail, Hayes having been sworn in already in private. Hayes took the oath again publicly on March 5 on the East Portico of the , and served until March 4, 1881. Hayes' best known quotation, "He serves his party best who serves his country best," is from his 1877 Inaugural Address.

Hayes vetoed bills repealing civil rights enforcement four times before finally signing one that satisfied his requirement for black rights. However, his subsequent attempts to reconcile with his Southern Democrat opposition by handing them prestigious civil service appointments both alienated fellow Republicans and undermined his own previous attempts at civil service reform.

Hayes' most controversial domestic actndash apart from ending Reconstructionndash came with his response to the of 1877, in which employees of the walked off the job and were joined across the country by thousands of workers in their own and sympathetic industries. When the labor disputes exploded into in several cities, Hayes called in federal troops, who, for the first time in U.S. history, fired on the striking workers, killing more than 70. Although the troops eventually managed to restore the peace, working people and industrialists alike were displeased with the military intervention. Workers feared that the federal government had turned permanently against them, while industrialists feared that such brutal action would spark revolution along the lines of the an .

During his presidency, Hayes signed a number of bills including one signed on February 15, 1879 which, for the first time, allowed female attorneys to argue cases before the .

In 1878, Hayes was asked by to act as arbitrator following the between Argentina, and against . The Argentines hoped that Hayes would give the region to them; however, he decided in favor of the Paraguayans. His decision made him a hero in Paraguay, and a city () and a department () were named in his honor.He also intended to build the U.S. controlled Panama Canal, though he wasn't the one who actually did it.

ignificant events during his presidency

Hayes did not seek re-election in 1880, keeping his pledge that he would not run for a second term. He had, in his , proposed a one- for the presidency combined with an increase in the term length to six years.

Hayes served on the of the , the school he helped found during his time as governor of Ohio, from the end of his Presidency until his death.

Rutherford Birchard Hayes died of complications of a heart attack in Fremont, , at 12:00 p.m. on Tuesday January 17, 1893. His last words were "I know that I'm going where Lucy is." Interment was in Riverwood Cemetery. Following the gift of his home to the state of Ohio for the Spiegel Grove State Park, he was reinterred there in 1915.

Hayes also had the high school in Delaware, Ohio (the town he was from) named after him

Hayes was the youngest of four children. Two of his siblings, Lorenzo Hayes (1815&ndash;1825) and Sarah Sophia Hayes (1817&ndash;1821), died in childhood, as was common at the time. Hayes was close to his surviving sibling, Fanny Arabella Hayes (1820&ndash;1856), as can be seen in this diary entry, written just after her death::"July, 1856. My dear only sister, my beloved Fanny, is dead! The dearest friend of childhood, the affectionate adviser, the confidante of all my life, the one I loved best, is gone; alas! never again to be seen on earth."

With Lucy Ware Webb, Hayes had the following children: