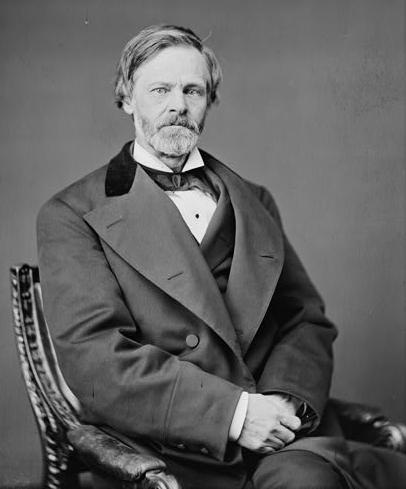 John Sherman nicknamed "The Ohio Icicle" (, &ndash; , ) was a U.S. Representative and U.S. Senator from during the Civil War and into the late nineteenth century. He served as both Secretary of the Treasury and Secretary of State and was the principal of the . His older brothers were , a US Judge in Ohio, and General of Civil War fame. His younger brother was .

Sherman was born in , to Mary Hoyt Sherman and , a justice in the Ohio Supreme Court. When he died in 1829, John's mother was left with eleven children to take care of. His brother, William, went to live with Maria and who were friends of the Shermans.

Sherman was educated at common schools as well as an academy in Ohio, but left early to work as an on projects. He later began studying law and was admitted to the bar in 1844. He became partners with his brother the same year and practiced out of . He married Margaret Sarah Stewart in 1848, the daughter of an Ohio .

After his marriage, Sherman took up an interest in . He was a delegate to the which nominated General for the presidency and again to the which nominated General . In 1853, he moved to . In 1854, he was elected a Republican to the for Ohio's thirteenth district where he was the Republican candidate for Speaker in the long contest of 1859-60 and served as chairman of the Committee on Ways and Means from 1860 to 1861.

After Senator resigned to become the Secretary of the Treasury, Sherman was elected to fill his seat. There, he served as chairman of the Committee on Agriculture from 1863 to 1867 and chairman of the Committee on Finance from 1863 to 1865 and again from 1867 to 1877. In 1877, newly elected President appointed Sherman Secretary of the Treasury. He served in the position through the entire Hayes administration, 1877 to 1881.

In 1880, he sought the Republican nomination for the presidency hoping to become a compromise candidate between and , but lost it to his .

When his term as Treasury Secretary expired, Sherman was elected back to the Senate to fill the seat to which was originally elected, Garfield having won election to the presidency that year. Sherman served as chairman of the Committee on the Library from 1881 to 1887, chairman of the Republican Conference from 1884 to 1885 and again from 1891 to 1897 and chairman of the Committee on Foreign Relations from 1885 to 1893 and again from 1895 to 1897. He was also elected President pro tempore of the Senate from 1885 to 1887. Due to the death of Vice President , Sherman was next in line for the presidency from December 1885 to January 1886. He had run for the presidency two more times in 1884 and 1888, but, again, lost the bids to and .

In 1890, Sherman wrote and introduced the , the first action to limit monopolies and thus the oldest of all . It was signed by President Benjamin Harrison that year.

In 1897, newly elected President appointed Sherman Secretary of State. Selected more for his high standing inside the Republican Party than any diplomatic experience, Sherman proved to be ineffective in the position and in 1898, McKinley replaced Sherman with Assistant Secretary of State .

Sherman retired from public life after resigning as Secretary of State. He died in after a lingering illness and was interred in Mansfield City Cemetery in , with his wife, Margaret.