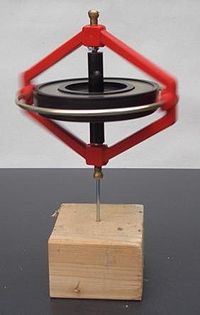 This gyroscope remains upright while spinning due to its angular momentum.

In physics, angular momentum, moment of momentum, or rotational momentum[1][2] is a conserved vector quantity that can be used to describe the overall state of a physical system. The angular momentum L of a particle with respect to some point of origin is

where r is the particle's position from the origin, p = mv is its linear momentum, and × denotes the cross product.

The angular momentum of a system of particles (e.g. a rigid body) is the sum of angular momenta of the individual particles. For a rigid body rotating around an axis of symmetry (e.g. the fins of a ceiling fan), the angular momentum can be expressed as the product of the body's moment of inertia I (a measure of an object's resistance to changes in its rotation rate) and its angular velocity ω:

In this way, angular momentum is sometimes described as the rotational analog of linear momentum.

The angular momentum L of a particle about a given origin is defined as:

As seen from the definition, the derived SI units of angular momentum are newton meter seconds (N·m·s or kg·m2s−1) or joule seconds. Because of the cross product, L is a pseudovector perpendicular to both the radial vector r and the momentum vector p and it is assigned a sign by the right-hand rule.

For an object with a fixed mass that is rotating about a fixed symmetry axis, the angular momentum is expressed as the product of the moment of inertia of the object and its angular velocity vector:

where I is the moment of inertia of the object (in general, a tensor quantity), and ω is the angular velocity.

Angular momentum is also known as moment of momentum.

Angular momentum of a collection of particles

If a system consists of several particles, the total angular momentum about a point can be obtained by adding (or integrating) all the angular momenta of the constituent particles.

where Ri is the position vector of particle i from the reference point, mi is its mass, and Vi is its velocity. The center of mass is defined by:

where the total mass of all particles is given by

It follows that the velocity of the center of mass is

Angular momentum in terms of scalar and vector components.

For many applications where one is only concerned about rotation around one axis, it is sufficient to discard the pseudovector nature of angular momentum, and treat it like a scalar where it is positive when it corresponds to a counter-clockwise rotation, and negative clockwise. To do this, just take the definition of the cross product and discard the unit vector, so that angular momentum becomes:

where θr,p is the angle between r and p measured from r to p; an important distinction because without it, the sign of the cross product would be meaningless. From the above, it is possible to reformulate the definition to either of the following:

is called the lever arm distance to p.

The easiest way to conceptualize this is to consider the lever arm distance to be the distance from the origin to the line that p travels along. With this definition, it is necessary to consider the direction of p (pointed clockwise or counter-clockwise) to figure out the sign of L. Equivalently:

is the component of p that is perpendicular to r. As above, the sign is decided based on the sense of rotation.

For an object with a fixed mass that is rotating about a fixed symmetry axis, the angular momentum is expressed as the product of the moment of inertia of the object and its angular velocity vector:

where I is the moment of inertia of the object (in general, a tensor quantity) and ω is the angular velocity.

it is proportional to the square of the angular velocity. 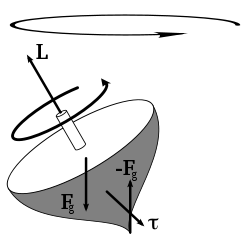 The torque caused by the two opposing forces Fg and -Fg causes a change in the angular momentum L in the direction of that torque (since torque is the time derivative of angular momentum). This causes the top to precess.

In a closed system angular momentum is constant. This conservation law mathematically follows from continuous directional symmetry of space (no direction in space is any different from any other direction). See Noether's theorem.[3]

The time derivative of angular momentum is called torque:

(The cross-product of velocity and momentum is zero, because these vectors are parallel.) So requiring the system to be "closed" here is mathematically equivalent to zero external torque acting on the system:

is any torque applied to the system of particles. It is assumed that internal interaction forces obey Newton's third law of motion in its strong form, that is, that the forces between particles are equal and opposite and act along the line between the particles.

If a planet is found to rotate slower than expected, then astronomers suspect that the planet is accompanied by a satellite, because the total angular momentum is shared between the planet and its satellite in order to be conserved. 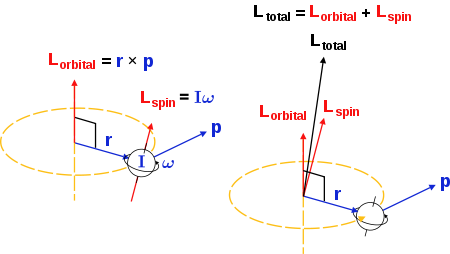 Conservation of angular momentum; distributed between the spin and orbital angular momenta. The moment of inertia and angular velocity of the spinning body are about its own spin axes, and its position is radial from the orbital axes and momentum tangential to the curve. Here circular orbits are shown - similar illustrations would follow for an elliptical orbit.

The conservation of angular momentum explains the angular acceleration of an ice skater as she brings her arms and legs close to the vertical axis of rotation. By bringing part of mass of her body closer to the axis she decreases her body's moment of inertia. Because angular momentum is constant in the absence of external torques, the angular velocity (rotational speed) of the skater has to increase.

The same phenomenon results in extremely fast spin of compact stars (like white dwarfs, neutron stars and black holes) when they are formed out of much larger and slower rotating stars (indeed, decreasing the size of object 104 times results in increase of its angular velocity by the factor 108).

(Here, the wedge product is used.).

In quantum mechanics, angular momentum is quantized – that is, it cannot vary continuously, but only in "quantum leaps" between certain allowed values. The orbital angular momentum of a subatomic particle, that is due to its motion through space, is always a whole-number multiple of

("h-bar," known as the reduced Planck's constant), which has an appropriate dimension energy·time, or length·momentum. Furthermore, experiments show that most subatomic particles have a permanent, built-in angular momentum, which is not due to their motion through space. This spin angular momentum comes in units of

. For example, an electron standing at rest has an angular momentum of

The classical definition of angular momentum as

depends on six numbers: rx, ry, rz, px, py, and pz. Translating this into quantum-mechanical terms, the Heisenberg uncertainty principle tells us that it is not possible for all six of these numbers to be measured simultaneously with arbitrary precision. Therefore, there are limits to what can be known or measured about a particle's angular momentum. It turns out that the best that one can do is to simultaneously measure both the angular momentum vector's magnitude and its component along one axis.

Mathematically, angular momentum in quantum mechanics is defined like momentum – not as a quantity but as an operator on the wave function:

it follows, for example,

For more details on this topic, see Clebsch–Gordan coefficients.

Given a quantized total angular momentum

which is the sum of two individual quantized angular momenta

the quantum number j associated with its magnitude can range from | l1 − l2 | to l1 + l2 in integer steps where l1 and l2 are quantum numbers corresponding to the magnitudes of the individual angular momenta.

Angular momentum as a generator of rotations

If ϕ is the angle around a specific axis, for example the azimuthal angle around the z axis, then the angular momentum along this axis is the generator of rotations around this axis:

The eigenfunctions of Lz are therefore

For a particle with a spin S, this takes into account only the angular dependence of the location of the particle, for example its orbit in an atom. It is therefore known as orbital angular momentum. However, when one rotates the system, one also changes the spin. Therefore the total angular momentum, which is the full generator of rotations, is Ji = Li + Si Being an angular momentum, J satisfies the same commutation relations as L, as will be explained below, namely[5]

Acting with J on the wavefunction ψ of a particle generates a rotation:

is the wavefunction ψ rotated around the z axis by an angle ϕ. For an infinitesmal rotation by an angle dϕ, the rotated wavefunction is ψ + idϕJzψ. This is similarly true for rotations around any axis.

In a charged particle the momentum gets a contribution from the electromagnetic field, and the angular momenta L and J change accordingly.

SO(3) has the same Lie algebra (i.e. the same commutation relations) as SU(2). Generators of SU(2) can have half-integer eigenvalues, and so can mj. Indeed for fermions the spin S and total angular momentum J are half-integer. For d=3, in fact, j and mj always are either integers or half-integers.[6]

Technically, this is because the universal cover of SO(3) is isomorphic to SU(2), and the representations of the latter are fully known. Ji span the Lie algebra and J2 is the Casimir invariant, and it can be shown that if the eigenvalues of Jz and J2 are mj and j(j+1) then mj and j are both integer multiples of one-half. j is non-negative and mj takes values between −j and j.

When solving to find eigenstates of this operator, we obtain the following

are the spherical harmonics.

Thus, a particle whose wave function is the spherical harmonic Yl,m has an orbital angular momentum

When describing the motion of a charged particle in the presence of an electromagnetic field, the canonical momentum p is not gauge invariant. As a consequence, the canonical angular momentum

is not gauge invariant either. Instead, the momentum that is physical, the so-called kinetic momentum, is

where e is the electric charge, c the speed of light and A the vector potential. Thus, for example, the Hamiltonian of a charged particle of mass m in an electromagnetic field is then

where ϕ is the scalar potential. This is the Hamiltonian that gives the Lorentz force law. The gauge-invariant angular momentum, or "kinetic angular momentum" is given by

The interplay with quantum mechanics is discussed further in the article on canonical commutation relations.