Precession of a gyroscope

In astronomy, "precession" refers to any of several slow changes in an astronomical body's rotational or orbital parameters, and especially to the Earth's precession of the equinoxes. See Precession (astronomy).

Torque-free precession occurs when the axis of rotation differs slightly from an axis about which the object can rotate stably: a maximum or minimum principal axis. Poinsot's construction is an elegant geometrical method for visualizing the torque-free motion of a rotating rigid body. For example, when a plate is thrown, the plate may have some rotation around an axis that is not its axis of symmetry. This occurs because the angular momentum (L) is constant in absence of torques. Therefore, it will have to be constant in the external reference frame, but the moment of inertia tensor (I) is non-constant in this frame because of the lack of symmetry. Therefore, the spin angular velocity vector (ωs) about the spin axis will have to evolve in time so that the matrix product L = Iωs remains constant.

When an object is not perfectly solid, internal vortices will tend to damp torque-free precession, and the rotation axis will align itself with one of the inertia axes of the body.

The torque-free precession rate of an object with an axis of symmetry, such as a disk, spinning about an axis not aligned with that axis of symmetry can be calculated as follows:

is the precession rate,

is the spin rate about the axis of symmetry,

is the angle between the axis of symmetry and the axis about which it precesses,

is the moment of inertia about the axis of symmetry, and

is moment of inertia about either of the other two perpendicular principal axes. They should be the same, due to the symmetry of the disk.[1]

For a generic solid object without any axis of symmetry, the evolution of the object's orientation, represented (for example) by a rotation matrix

that transforms internal to external coordinates, may be numerically simulated. Given the object's fixed internal moment of inertia tensor

, the instantaneous angular velocity is

and applying a small rotation vector

for the short time dt, e.g.

; this unphysical tendency can be counter-acted by repeatedly applying a small rotation vector

Another type of torque-free precession can occur when there are multiple reference frames at work. For example, the earth is subject to local torque induced precession due to the gravity of the sun and moon acting upon the earth’s axis, but at the same time the solar system is moving around the galactic center. As a consequence, an accurate measurement of the earth’s axial reorientation relative to objects outside the frame of the moving galaxy (such as distant quasars commonly used as precession measurement reference points) must account for a minor amount of non-local torque-free precession, due to the solar system’s motion.

Torque-induced precession (gyroscopic precession) is the phenomenon in which the axis of a spinning object (e.g., a part of a gyroscope) "wobbles" when a torque is applied to it. The phenomenon is commonly seen in a spinning toy top, but all rotating objects can undergo precession. If the speed of the rotation and the magnitude of the torque are constant, the axis will describe a cone, its movement at any instant being at right angles to the direction of the torque. In the case of a toy top, if the axis is not perfectly vertical, the torque is applied by the force of gravity tending to tip it over.

The response of a rotating system to an applied torque. When the device swivels, and some roll is added, the wheel tends to pitch.

The device depicted on the right here is gimbal mounted. From inside to outside there are three axes of rotation: the hub of the wheel, the gimbal axis, and the vertical pivot.

The same reasoning applies for the bottom half of the wheel, but there the arrows point in the opposite direction to that of the top arrows. Combined over the entire wheel, there is a torque around the gimbal axis when some spinning is added to rotation around a vertical axis.

It is important to note that the torque around the gimbal axis arises without any delay; the response is instantaneous.

Precession or gyroscopic considerations have an effect on bicycle performance at high speed. Precession is also the mechanism behind gyrocompasses.

Gyroscopic precession also plays a large role in the flight controls on helicopters. Since the driving force behind helicopters is the rotor disk (which rotates), gyroscopic precession comes into play. If the rotor disk is to be tilted forward (to gain forward velocity), its rotation requires that the downward net force on the blade be applied roughly 90 degrees (depending on blade configuration) before, or when the blade is to one side of the pilot and rotating forward. 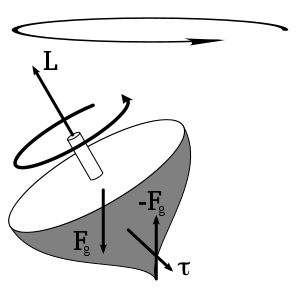 The torque caused by the two opposing forces Fg and -Fg causes a change in the angular momentum L in the direction of that torque. This causes the top to precess.

Under these circumstances the angular velocity of precession is given by:

In which Is is the moment of inertia,

is the angular velocity of spin about the spin axis, and m*g*r are the force and radius that comes from the torque. The torque vector originates at the center of mass. Using

, we find that the period of precession is given by:

In which Is is the moment of inertia, Ts is the period of spin about the spin axis, and

is the torque. In general, the problem is more complicated than this, however.

The special and general theories of relativity give three types of corrections to the Newtonian precession, of a gyroscope near a large mass such as the earth, described above. They are:

In astronomy, precession refers to any of several gravity-induced, slow and continuous changes in an astronomical body's rotational axis or orbital path. 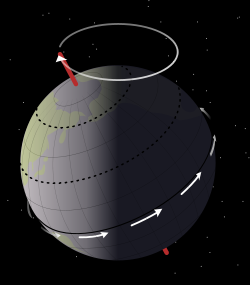 Precession of the equinox in relation to the distant stars

Axial precession is the movement of the rotational axis of an astronomical body, whereby the axis slowly traces out a cone. In the case of Earth, this type of precession is also known as the precession of the equinoxes or precession of the equator. Earth goes through one such complete precessional cycle in a period of approximately 26,000 years, during which the positions of stars as measured in the equatorial coordinate system will slowly change; the change is due to the change of the coordinates. Over this cycle, Earth's north axial pole moves from where it is now, within 1° of Polaris, in a circle around the ecliptic pole, with an angular radius of about 23.5 degrees (or approximately 23 degrees 27 arcminutes [2]). The shift is 1 degree in 72 years, where the angle is taken from the observer, not from the center of the circle.

Hipparchus is the earliest known astronomer to recognize and assess the precession of the equinoxes at almost 1º per century (which is not far from the actual value for antiquity, 1.38º).[3] The Precession (axial rotation) was later explained by Newtonian physics. Being an oblate spheroid, the Earth has a nonspherical shape, bulging outward at the equator. The gravitational tidal forces of the Moon and Sun apply torque as they attempt to pull the equatorial bulge into the plane of the ecliptic. The portion of the precession due to the combined action of the Sun and the Moon is called lunisolar precession.

Precession of the ecliptic

Planets revolving the Sun follow elliptical (oval) orbits that rotate gradually over time (apsidal precession). The eccentricity of this ellipse is exaggerated for visualization. Most orbits in the Solar System have a much smaller eccentricity, making them nearly circular.

The orbit of a planet around the Sun is not really an ellipse but a flower-petal shape because the major axis of each planet's elliptical orbit also precesses within its orbital plane, partly in response to perturbations in the form of the changing gravitational forces exerted by other planets. This is called perihelion precession or apsidal precession.

Discrepancies between the observed perihelion precession rate of the planet Mercury and that predicted by classical mechanics were prominent among the forms of experimental evidence leading to the acceptance of Einstein's Theory of Relativity (in particular, his General Theory of Relativity), which accurately predicted the anomalies.[4][5]