The Levi-Civita symbol, also called the permutation symbol, antisymmetric symbol, or alternating symbol, is a mathematical symbol used in particular in tensor calculus. It is named after the Italian mathematician and physicist Tullio Levi-Civita. 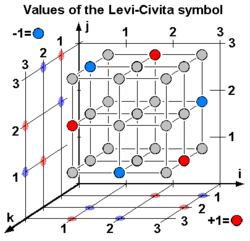 Values of the Levi-Civita-Symbol for a right-handed coordinate system.

In three dimensions, the Levi-Civita symbol is defined as follows:

The formula for the three dimensional Levi-Civita symbol is:

The formula in four dimensions is:

Visualization of the Levi-Civita symbol as a 3×3×3 matrix. 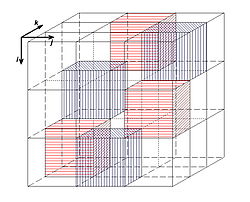 Corresponding visualization of the Levi-Civita-Symbol for a left-handed coordinate system. Empty cubes mean 0, red ones +1, and blue ones -1.

For example, in linear algebra, the determinant of a 3×3 matrix A can be written

(and similarly for a square matrix of general size, see below)

and the cross product of two vectors can be written as a determinant:

According to the Einstein notation, the summation symbols may be omitted.

The tensor whose components in an orthonormal basis are given by the Levi-Civita symbol (a tensor of covariant rank n) is sometimes called the permutation tensor. It is actually a pseudotensor because under an orthogonal transformation of jacobian determinant −1 (i.e., a rotation composed with a reflection), it acquires a minus sign. Because the Levi-Civita symbol is a pseudotensor, the result of taking a cross product is a pseudovector, not a vector.

Note that under a general coordinate change, the components of the permutation tensor get multiplied by the jacobian of the transformation matrix. This implies that in coordinate frames different from the one in which the tensor was defined, its components can differ from those of the Levi-Civita symbol by an overall factor. If the frame is orthonormal, the factor will be ±1 depending on whether the orientation of the frame is the same or not.

The Levi-Civita symbol is related to the Kronecker delta. In three dimensions, the relationship is given by the following equations:

In Einstein notation, the duplication of the i index implies the sum on i. The previous is then denoted:

The Levi-Civita symbol can be generalized to higher dimensions:

Thus, it is the sign of the permutation in the case of a permutation, and zero otherwise.

The generalized formula is:

where n is the dimension (rank) and G(n) is the Barnes G-function.

For any n the property

In index-free tensor notation, the Levi-Civita symbol is replaced by the concept of the Hodge dual.

In general, for n dimensions, one can write the product of two Levi-Civita symbols as:

(in these examples, superscripts should be considered equivalent with subscripts)

For equation 1, both sides are antisymmetric with respect of ij and mn. We therefore only need to consider the case

. By substitution, we see that the equation holds for ε12ε12, i.e., for i = m = 1 and j = n = 2. (Both sides are then one). Since the equation is antisymmetric in ij and mn, any set of values for these can be reduced to the above case (which holds). The equation thus holds for all values of ij and mn. Using equation 1, we have for equation 2 εijεin =

Here we used the Einstein summation convention with i going from 1 to 2. Equation 3 follows similarly from equation 2. To establish equation 4, let us first observe that both sides vanish when

, then one can not choose m and n such that both permutation symbols on the left are nonzero. Then, with i = j fixed, there are only two ways to choose m and n from the remaining two indices. For any such indices, we have εjmnεimn = (εimn)2 = 1 (no summation), and the result follows. Property (5) follows since 3! = 6 and for any distinct indices i,j,k in {1,2,3}, we have εijkεijk = 1 (no summation).

1. The determinant of an

matrix A = (aij) can be written as

where each il should be summed over

Equivalently, it may be written as

where now each il and each jl should be summed over

2. If A = (A1,A2,A3) and B = (B1,B2,B3) are vectors in R3 (represented in some right hand oriented orthonormal basis), then the ith component of their cross product equals

For instance, the first component of

is A2B3 − A3B2. From the above expression for the cross product, it is clear that

From this expression, it can be seen that the triple scalar product is antisymmetric when exchanging any adjacent arguments. For example,

A shorthand notation for anti-symmetrization is denoted by a pair of square brackets. For example, in arbitrary dimensions, for a rank 2 covariant tensor M,

and for a rank 3 covariant tensor T,

In three dimensions, these are equivalent to

While in four dimensions, these are equivalent to

Notice that the value, and in particular the sign, does not change.

This article incorporates material from Levi-Civita permutation symbol on PlanetMath, which is licensed under the Creative Commons Attribution/Share-Alike License.